The first-place Atlanta Braves (51-36) used a big six-run 6th inning to pull away from the visiting Philadelphia Phillies (45-41) and register a 9-2 win on Wednesday night at SunTrust Park.

With the win, the Braves pushed their lead in the National League East Division standings back out to 5.5 games (five in the loss column) over the second place Phillies, who are now just a half-game ahead of the third place Washington Nationals. The Phillies have not been lower than second place in the division standings all season.
The two teams were battling in a tough 3-2 game after the first 5 1/2 innings, with all of the runs coming via the long ball. Josh Donaldson ripped his 16th homer of the season in the bottom of the 4th inning, a three-run shot off Phillies starter Nick Pivetta, to open the scoring.
In the top of the 6th, Bryce Harper got the Phillies back within a run by blasting his 16th homer. For the Phillies big free agent signing, it was the 200th home run of his big-league career as well as his 1,000th career hit. 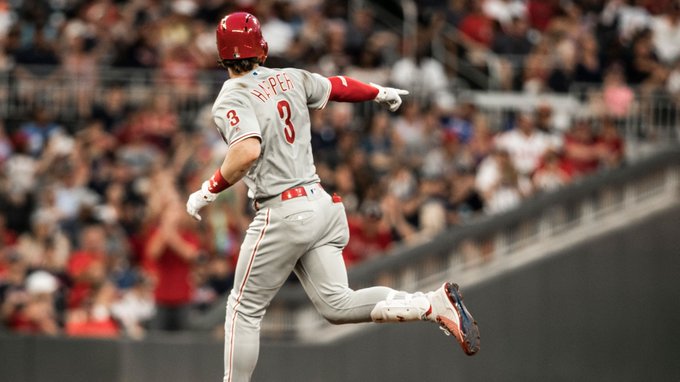 Phillies Nation@PhilliesNation
There was one bright spot tonight. Bryce Harper’s 16th home run of the season was the 200th of his big-league career, as well as career hit 1,000.

See Phillies Nation’s other Tweets
Twitter Ads info and privacy
The tight score didn’t last long, as the Braves knocked Pivetta out of the game with their crooked inning in the bottom of the frame. Two more homers, both coming with two outs, did most of the damage. The first came off the bat of rookie left fielder Austin Riley to make it 6-2 and drive Pivetta from the game. It was Riley’s 15th home run in just 44 games since his May 15 promotion from the minors.
Phillies manager Gabe Kapler went to his bullpen and brought in Juan Nicasio. The right-hander has been inconsistent all season, and he was just bad in this one. Ozzie Albies and Tyler Flowers greeted him with back-to-back doubles to push the Atlanta lead out to 7-2. Then Matt Joyce, pinch-hitting for starting pitcher Bryse Wilson, drilled a Nicasio four-seam fastball out deep to right field for his third homer of the year to put the final runs on the board.
For Pivetta, this was a disheartening fourth consecutive poor outing. Over 23.1 innings in those four starts, Pivetta has given up 20 runs (19 earned) on 29 hits, including nine home runs. He was reached for at least two home runs in each of those four games.
The two clubs have now split the first two games of this series. If the Phillies want to win a series, they are going to have to find a way to score runs off one of the toughest starting pitchers in the game on Independence Day in Mike Soroka. They put at least five runs on the board in six of seven games coming into tonight. That offense has to show up on Thursday.

The home run by Harper was the only real mistake made by the 21-year-old rookie right-hander who was making just his third big-league start. The Phillies beat him up back on March 30 in what was his MLB debut. This time around he showed why he is considered one of the top prospects in one of the most respected organizations in the game.