The Philadelphia Phillies (41-38) defeated the visiting New York Mets (37-43) by a 7-5 score on Tuesday night at Citizens Bank Park.

It was a second consecutive offensive explosion that carried the Phillies, with the club powering at least four home runs on successive nights for the first time in over a decade.
This time it was no blowout. The Phillies fell behind early. But rather than tuck their tails between their legs and accept defeat, as seemed to happen too often during their recent losing spell, the team showed renewed heart in fighting all the way back.
It was not at all a good night for Phillies starting pitcher Jake Arrieta. He never got it together while surrendering four earned runs over the first three frames to put the team into an early 4-1 hole.
The Mets started the game with three consecutive singles which led to their scratching out two runs in the top of the 1st inning. Solo home runs by Amed Rosario in the top of the 2nd and Dominic Smith in the top of the 3rd off-set a solo homer by Scott Kingery to leadoff the home 1st inning. 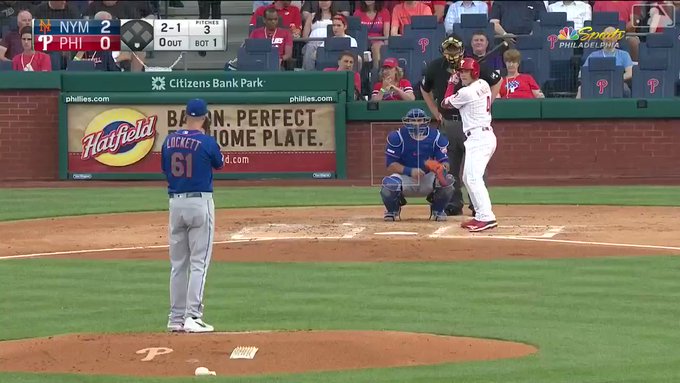 See Phillies Nation’s other Tweets
Twitter Ads info and privacy
A solo home run off the bat of Rhys Hoskins, his 18th of the season, pulled the Phillies within 4-2 in the bottom of the 4th inning. In the top of the 6th, Jeff McNeil‘s RBI single countered that to push the Mets lead to 5-2.
The bottom of the 6th inning would prove decisive, as the Phillies put a big crooked five-spot up on the scoreboard. Bryce Harper started it by working a walk, and then J.T. Realmuto drilled a one-out double into the gap to put runners at second and third. Jay Bruce then grounded out with Harper scoring to make it 5-3, and Cesar Hernandez‘ infield single allowed Realmuto to roll home with the run that pulled the Phillies within a run at 5-4.
That’s when the Phillies again plugged in their power cords. Maikel Franco stepped in and rifled his second home run in as many nights. His 11th homer of the season was a two-run blast that pushed the Phillies on top for the first time all night at 6-5. Thomson then sent Brad Miller up to pinch-hit for Arrieta. Miller took a curveball and lifted it into the right field stands, giving the Phillies back-to-back homers and a 7-5 lead. 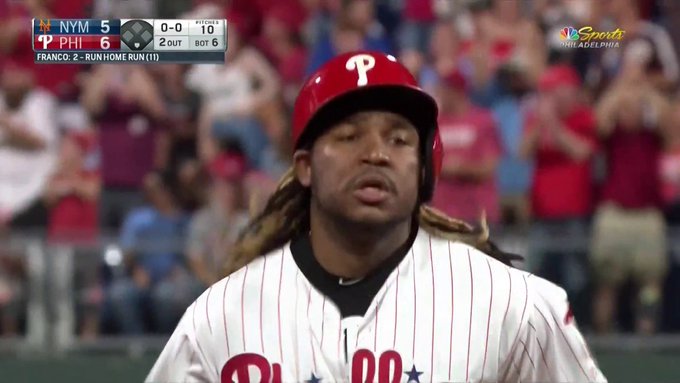 Phillies Nation@PhilliesNation
Maikel Franco’s two-run rocket in the bottom of the 6th put the Phillies on top for the first time at 6-5.

39 people are talking about this
Twitter Ads info and privacy
Those twin longballs appeared to irk Mets reliever Wilmer Font, who had come in for Mets rookie starting pitcher Walker Lockett. Font immediately fired a ball that nailed Kingery in the head. The Phillies hottest hitter was okay, thanks to his helmet and the angle of the blow.
Home plate umpire Joe West wasted no time, immediately signaling a warning to both benches. Already hot from seeing his top hitter get nailed, that warning got Phillies skipper Gabe Kapler justifiably enraged. He charged out of the dugout and was immediately tossed by West, Kapler’s second ejection in the last few days. 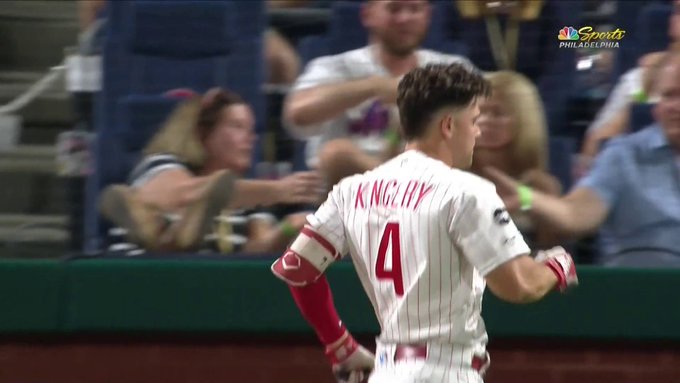 Phillies Nation@PhilliesNation
Kingery gets nailed near the noggin. Joe West warns both benches. Gabe objects nicely (?) and gets run for the second time.

107 people are talking about this
Twitter Ads info and privacy
That lead held into the top of the 8th when the Mets nearly tied it up. Again, it was new Phillies-killer McNeil trying to do the dirty work. His ground-rule double with a man on and two outs was challenged by Mets skipper Mickey Callaway, who thought it was a game-tying two-run homer. The umpires were judged to be right by the replay crew.
Thomson then made the move to bring in Hector Neris to face powerful Mets rookie first baseman Peter Alonso as the go-ahead run. Neris won the battle, getting Alonso to pop out to first base for the third out. Neris would come out again for the 9th inning with the Phillies still holding their 7-5 lead.
Robinson Cano started the frame by working a full count and then lacing a double to left field. One out later, Todd Frazier also worked the count full and then drew a walk. Neris would have to face the go-ahead run at the plate. He struck out Smith  on four pitches for the second out, and up stepped former Phillies catcher Wilson Ramos. Neris got him on a 4-3 ground out, and was awarded his 16th Save of the season as the Phillies won it 7-5.
After last night’s offensive explosion laugher, for the Phillies to not only rally from behind to win, but also to have the bullpen fight to hold the hard-earned lead was enormous. No, it wasn’t pretty, but they won’t all be pretty wins. A win is a win is a win, especially after a seven-game losing skid.
The Phillies have gotten themselves turned around in the right direction. Now they need to do the job, finishing off a sweep of the Mets on Thursday night.

He only had one hit in four at-bats, but it was a big one. Franco’s two-out, two-run home run finally pushed the Phillies in front by a 6-5 score after they had trailed all night.
Also, Franco made a nice defensive play in the top of the 4th inning. After Arrieta threw away a pickoff attempt while trying to get McNeil at first base, the runner rolled around to third. Alonso then chopped a grounder to Franco, who made a difficult throw to the plate to nail McNeil, keeping the Phillies within 4-1 at that point.

Originally published at Phillies Nation as “Phillies show heart, rally from behind to take second straight over Mets“