The host Atlanta Braves (42-30) completely dismantled the Philadelphia Phillies (39-32) by a 15-1 score, treating the fans at SunTrust Park to a real Father’s Day celebration.

With the win, the Braves open up a 2.5 game lead on the Phillies in the National League East Division standings. Atlanta has now won 12 of their last 15 games, and they are 24-10 since manager Brian Snitker installed 2018 NL Rookie of the Year Ronald Acuna Jr. as his leadoff man.
The Phillies were never in this one. Manager Gabe Kapler decided to go with Vince Velasquez in an “Opener” role, and it completely backfired. Velasquez (2-4) surrendered three runs in the bottom of the 1st inning to put the club into a hole from which they were never able to climb out.
Velasquez was followed to the hill by Cole Irvin, and the lefty was even worse. Irvin would go 3.2 innings, allowing six earned runs and letting the Braves score in every inning in which he was on the mound.
Next up, Jerad Eickhoff, meaning that Kapler used three pitchers who were in his starting rotation at one point in this season. Eickhoff was even worse than Irvin, if you can believe that, surrendering five earned runs in just one inning on the bump.
The Phillies most effective “pitcher” in this game? Utility man Sean Rodriguez, who tossed a shutout frame in the bottom of the 8th inning that included a strikeout.
Rather than just tick off each of the runs and prolong the agony for you readers, let’s just take a look down the Braves lineup. Acuna had four hits including his 16th home run and scored four runs. Josh Donaldson produced three hits including his 12th homer. Freddie Freeman had two hits, a walk, two RBIs, and two runs scored. Ozzie Albies had three hits, two runs, and two RBIs. Nick Markakis and Austin Riley each had a pair of hits, combining to score two runs and drive in three. 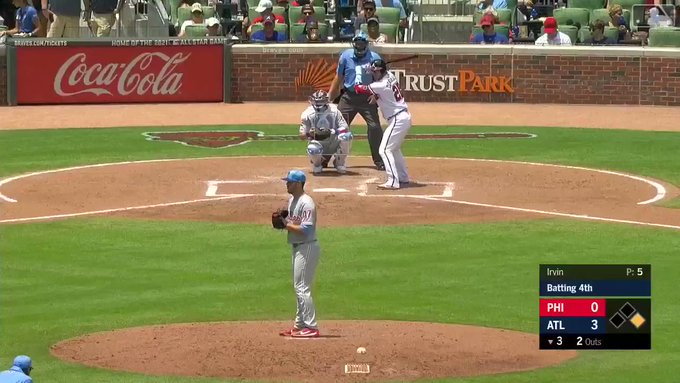 Phillies Nation@PhilliesNation
Here’s a look at Josh Donaldson’s third homer of the series, which pushed Braves lead out to 5-0 in bottom of 3rd inning.

See Phillies Nation’s other Tweets
Twitter Ads info and privacy
All-in-all, the Atlanta lineup went 19-40 on the afternoon. That makes for an incredible one-day batting average at the .475 mark. Again, against three pitchers who were in the Phillies starting rotation this season.
The lone Phillies run came in the top of the 5th inning with the club already down by a 7-0 score when an RBI single off the bat of Bryce Harper scored Andrew Knapp. Though Atlanta’s starting pitcher, Mike Foltynewicz (2-5) was wild, walking five and throwing one charged wild pitch (he threw another wild that didn’t hurt him), the Phillies simply couldn’t take advantage.
In his post-game presser, Kapler had little choice but to be matter-of-fact after this kind of defeat: “We’re gonna need to perform really well against teams like the Atlanta Braves. They’re a deep lineup. We’ve obviously played them well overall on the year, but today’s effort wasn’t good enough.”

“We turn the page and move on to Washington very quickly. We don’t dwell on this one, we get right on to the next one.” ~ Gabe Kapler

The Phillies have no choice but to forget about this one. They played the red-hot Braves extremely tough over the first two games of the series, losing Friday night on a walkoff and then winning last night with their own 9th inning rally. They now move on to Washington for a four-game set with the Nationals beginning on Monday night in our nation’s capital.

Hard to top a four-hit, four-run game in which you bash a home run. Acuna has been the Braves catalyst for the last 6-7 weeks, and he was that once again today.