The Philadelphia Phillies short-season affiliates in the New York-Penn League, the Williamsport Crosscutters, will begin play for the 2019 season tonight (Friday) at historic Bowman Field in Williamsport, Pennsylvania.
The Phillies minor league affiliates at the Triple-A (Lehigh Valley), Double-A (Reading), High-A (Clearwater), and Low-A (Lakewood) levels have been competing for more than two months now.
The NY-Penn League season starts in mid-June, with many team rosters featuring players selected in the most recent MLB Draft who have signed a contract with the big-league organization. Those recent draftees have until July 12 to sign, but most are under contract well before that point.
New York–Penn League teams may have no more than three players on their active lists that have four or more years of prior combined MLB/MiLB service time, with the exception of position players changing roles to become pitchers and vice versa.
The NY-P is one of three such rookie-level leagues set to get underway. The Northwest League also opens play on Friday night, with eight teams located in the Northwestern United States and in Canada. On Tuesday the Pioneer League, with eight teams located in the Rocky Mountain region of the U.S., will get to begin play in their 2019 season. 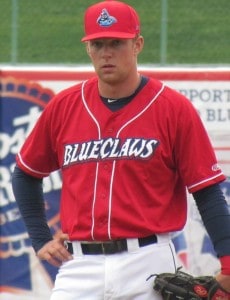 Rhys Hoskins began his pro career playing in 70 games with the Crosscutters back in the summer of 2014, right after the Phillies had made him their 5th round draft pick.
There will be 14 teams making up the 2019 New York-Penn League, with Williamsport taking part in their 13th year as a Phillies affiliate. Prior to that, the City of Williamport, located approximately 130 miles northwest of Philly, hosted a Pittsburgh Pirates affiliate for eight seasons from 1999-2006, and a Chicago Cubs affiliate for five seasons from 1994-98.
The 14 NY-P teams are split among three divisions: McNamara (4), Stedler (4), and Pinckney (6), with Williamsport having finished in last place in the standings (32-44) a year ago.

Former big-league catcher Pat Borders will serve as the Williamsport manager for his fifth season at the helm of the Crosscutters. He has a 154-147 record as the skipper, holds the franchise record for managerial wins, and led the club to the 2015 Pinckney Division championship.
The 56-year-old Borders won a Gold medal with the U.S. baseball team at the 2000 Summer Olympics and played in MLB for 17 seasons, eight of those in Toronto. He was the Blue Jays starting catcher on their back-to-back World Series championship teams in 1992 and 1993.
Williamsport will open the season on Friday night by taking on the State College Spikes. Speedy outfielder Corbin Williams will lead the club’s offensive attack. A 21-year-old who was the Phillies 24th round draft pick a year ago out of college in California, Williams is stepping up a level after playing his first pro season in the Gulf Coast League after signing last summer. He has graded out as having 80 speed on the 20-80 scouting scale.
Gustavo Armas, a 23-year-old right-hander from Venezuela, will get the start on the mound in the opener for the Crosscutters. Armas has already pitched in eight games this season for the High-A Clearwater Threshers in his sixth minor league season.
“I’m really excited, man, really excited,” said Armas during the Crosscutters’ media day on Wednesday per Brian Holtzapple at The Standard-Journal. “This is my first opening-day start in my career, so I feel really excited, and I feel really prepared and really good for (Friday).”
BB&T Ballpark at Historic Bowman Field has an official seating capacity of 2,366 and opened in Williamport all the way back in 1926, making it the second-oldest ballpark in all of Minor League Baseball.
For the past two seasons the ballpark has played host to one official MLB game each year known as the ‘Little League Classic‘, with the Phillies and Mets participating in last year’s tilt, which comes in conjunction with the Little League World Series each August.
There are many familiar names to Phillies fans who have pulled on a Crosscutters jersey. Included among them are current Phillies players Rhys Hoskins, Cesar Hernandez, Maikel Franco, Adam Morgan, Hector Neris, Roman Quinn, Andrew Knapp, and Seranthony Dominguez.
Other notable big-leaguers who have played with the team include Andrew McCutchen, Jose Bautista, and Rajai Davis. Last year’s top Phillies draft pick, Alec Bohm, played in 29 games here last summer.
While winning is nice, that really isn’t what the NY-P is all about. This is a chance for young players, and occasionally more established players who are making some major change to their game, to gain playing experience and develop their games in front of professional coaches and scouts.
For any Philly-area fans who may want to take a trip to check out the action, expect a drive of just under four hours starting out on either I-76 or I-476. There are also one-hour flights from Philly to the Williamsport Regional Airport.
Originally published by Phillies Nation as “Williamsport Crosscutters open their 2019 New York-Penn League season“