Marcus Stroman is a major trade chip for Blue Jays

Like pretty much every other legitimate contending team in Major League Baseball, the 2019 Philadelphia Phillies could really use another solid veteran pitcher to bolster their starting rotation.

The top four starters for the club this season have been Aaron Nola, Jake Arrieta, Zach Eflin, and Nick Pivetta. The Phillies have also given regular turns to Jerad Eickhoff to this point, and just recently finally made the long-anticipated move of flipping Vince Velasquez to the bullpen.
When emergencies have cropped up, 25-year-old lefty Cole Irvin has been given three starts. Manager Gabe Kapler even turned to Jose Alvarez as an “opener” in one game, using the veteran lefty for the first two innings and then bringing in Irvin to cover nearly four frames on June 1 against the Dodgers in Los Angeles.
In most of the Phillies recent seasons, Eickhoff would deserve more of a chance. And he will continue in the rotation as long as he remains healthy and doesn’t completely implode. Having allowed four earned runs or more in half of his 2019 starts, Eickhoff would likely be the odd man out if general manager Matt Klentak was able to bring a solid option in to bolster the rotation.
But is such an arm actually out there and available? In evaluating the landscape in Major League Baseball, there would appear to be a number of such options. Their skills and experience levels are wide-ranging. It could be arguable as to whether a couple of them would be a legitimate upgrade.
These 10 arms seem to be the best possibilities for a trade to the Phillies. Many of them will absolutely find themselves putting on the uniform of a new team prior to the July 31 MLB trade deadline. You can bet that Klentak has already been considering most, if not all, of these pitchers, and has perhaps already been engaging in some preliminary negotiations.
Each pitcher is listed with their their team, “handedness”, age, and 2019 statistics through games of June 8. Also shown is their current contract status.
Trevor Bauer (28/CLE/RHP): 4-6, 3.93 ERA, 1.156 WHIP, 66 hits allowed over 91.2 IP across 14 starts with a 103/40 K:BB. Contract moved from $6.25 million last year to $13 million this year through arbitration. He is again arbitration-eligible for the 2020 season, after which he is due to become a free agent at age 29.
Madison Bumgarner (29/SF/LHP): 3-5, 4.05 ERA, 1.200 WHIP, 80 hits allowed over 80 IP across 13 starts with a 79/16 K:BB. He turns 30-year-old on August 1, and will be a free agent after this season. Currently making $12 million in the final season of an eight-year deal worth just north of $58 million total.
Andrew Cashner (32/BAL/RHP): 6-2, 4.73 ERA, 1.379 WHIP, 71 hits over 70.1 IP across 13 starts with a 51/26 K:BB. The least attractive arm on this list, but perhaps also the least expensive from the perspective of what you would have to give up. Making $9.5 mill this year, $10 mill option for next year is guaranteed if he reaches 187 innings this season, which is not likely. If not, he becomes a free agent after this season, so the commitment is also short-term.
Zack Greinke (35/ARZ/RHP): 7-2, 2.87 ERA, 0.935 WHIP, 68 hits over 87.2 IP across 14 starts with an 82/14 K:BB. Did you realize Greinke was already 35-years-old? Good for you, because I thought he was about three years younger before researching this piece. He is owed $35 mill in each of the next two seasons. His performance has shown no signs of slipping over the last few years. Can he actually remain an All-Star caliber ace for two more? That would be the big bet. 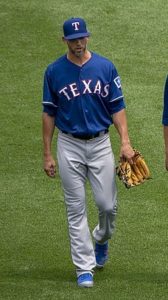 Lefty Mike Minor of the Texas Rangers will be a hot commodity as the 2019 MLB trade deadline approaches. (Keith Allison)
Mike Leake (31/SEA/RHP): 5-6, 4.30 ERA, 1.273 WHIP, 88 hits over 81.2 IP across 13 starts with a 56/16 K:BB. Along with Cashner, he isn’t going to elicit excitement in the fan base. But Leake is a steady, reliable, experienced starting pitcher who got a start in the 2014 NLDS for the Cincinnati Reds. He will earn $15 mill next year, with $4 of that paid by Saint Louis. He has a 2021 mutual option for $18 million with a $5 mill buyout.
Mike Minor (31/TEX/LHP): 5-4, 2.55 ERA, 1.217 WHIP, 73 hits over 81.1 IP across 13 starts with an 87/26 K:BB. The southpaw is owed $9.83 mill for next season and then is due to become a free agent. After missing most of the 2015 season and all of 2016 following shoulder surgery, Minor came back in 2017 as a reliever with Kansas City. Texas signed him as a free agent, moved him back into the rotation where he began his career in Atlanta, and he has looked strong.
Tanner Roark (32/CIN/RHP): 4-5, 3.74 ERA, 1.411 WHIP, 68 hits over 67.1 IP across 13 starts with a 69/27 K:BB. He will become a free agent after this season, in which he is being paid just $10 million. The ultimate pure rental.
Aaron Sanchez (26/TOR/RHP): 3-7, 4.25 ERA, 1.542 WHIP, 71 hits over 72 IP across 14 starts with a 61/40 K:BB. The youngest and cheapest salaried arm on this list is making $3.9 mill this year and arbitration-eligible next season, after which he can become a free agent. What is Sanchez? Starter or reliever? Sort of a Velasquez-type situation. Do the Phillies want to get involved in that again? Do they believe he can be more?
Marcus Stroman (28/TOR/RHP): 3-8, 3.31 ERA, 1.322 WHIP, 80 hits over 81.2 IP across 14 starts with a 63/28 K:BB. Making $7.4 million, eligible for arbitration next season, and then up for his first possible taste of free agency. Stroman is one of the more intriguing options out there and will be highly sought at this year’s deadline. The Jays could wait until the off-season or even into next year before making a deal, so the cost in trade to add a talented arm in his prime would be high.
Zack Wheeler (29/NYM/RHP): 5-3, 4.61 ERA, 1.226 WHIP, 78 hits over 84 innings across 13 starts with a 93/25 K:BB. Pending free agent would be a great candidate for a trade-for-and-extend deal for the Phillies. However, his being on the market at all would require the Mets falling totally out of the race, so it wouldn’t happen until after the MLB All-Star break in all likelihood, if at all. Even then, would the Mets deal him inside the division? Sure, if the Phillies paid the right price. Tough one. Would probably have to give up good prospects, with no guarantee beyond the last 2-3 months of this season.
Originally published at Phillies Nation as “10 starting pitchers who are realistic Phillies trade targets“