Dbacks tickets could still be hot sellers in Phoenix this summer

The Philadelphia Phillies (37-28) are 5-1-1 over their last seven series, with only a sweep at the hands of the host Los Angeles Dodgers showing as a black mark over their last month of play. They lead the NL East Division standings by one game over the Atlanta Braves.

To close out a short home stand, the Phillies welcome in the Arizona Diamondbacks (34-32) of the NL West Division to Citizens Bank Park for three games to open this week. The Dbacks are winners of four straight games, and now sit 2.5 games behind Atlanta for the final NL Wildcard playoff berth.
Over the first month or so of the season, the Diamondbacks were as hot as the Arizona desert in mid-summer. They bolted out to a 20-13 start and were within a game of the division lead.
But the club won just eight of their next 25 games to fall below the .500 mark, consistently dropping further and further behind the Dodgers in the standings. Even with that four-game current win streak, the Dbacks still trail the Dodgers by 11 games.
While their rivals in Los Angeles appear to be well on their way to a seventh consecutive division crown, Arizona remains squarely in the National League Wildcard race as they fight to reach the playoffs for just the third time in this decade. So, they will certainly pose a challenge to the Phillies, who are looking to return to those playoffs for the first time in eight years.
Arizona comes in with a potent offensive attack which ranks third in the National League in runs-per-game. They are also second in the league in doubles, third  in batting average and stolen bases, fourth in OPS, and fifth in home runs. So this is a well-rounded and balanced attack.
The Dbacks pitching staff is no slouch either, ranking fourth in the NL in ERA, and 5th in OPS-against and strikeouts. No team in all of Major League Baseball has a better fielding percentage than the Arizona defenders, who have committed the fewest errors in the entire National League.
Bottom line, this is a sound ball club that is coming in to South Philly this week. Though they were struggling badly for more than a month, the Dbacks have recently gotten hot again. It will be up to the Phillies to cool them off, finding a way to win yet another series.

Eduardo Escobar: 30-year-old switch-hitting third baseman came via trade from the Minnesota Twins last August. Coming off career highs of 23 homers and 84 RBIs a year ago, Escobar is on his way to beating both of those totals this year. He is tied for the club lead with 15 home runs, and leads the Dbacks with 49 RBIs, 35 extra-base hits, and 41 runs scored.
Ketel Marte: A 25-year-old switch-hitting second baseman who also played a lot of center field over the first two months of the season. Marte has already set a career high with 15 homers, and his 45 RBIs, 31 extra-base hits, and 39 runs scored are all second on the team.
David Peralta: The 31-year-old left fielder leads club regulars with a .301 average and .350 on-base percentage. He won an NL Silver Slugger Award a year ago when he banged 30 homers with 87 RBIs and 60 extra-base hits.
Christian Walker: 28-year-old first baseman is in his fifth big-league season, but his first as a starter. Walker’s 29 extra-base hits and 34 runs scored are third on the team.

Adam Jones: The 33-year-old veteran right fielder signed as a free agent with Arizona during spring training after spending the previous 11 seasons with the Baltimore Orioles. Jones is a five-time AL All-Star who won four Gold Glove Awards and a 2013 Silver Slugger Award.
Making just $3 million on a one-year contract, Jones could end up as trade bait next month if the Dbacks cannot stay in the postseason hunt. His is slashing .276/.321/.500 this year and is third on the team with a dozen homers and 37 RBIs. He has even been rumored as a possible Phillies trade target.

Ildemaro Vargas: 27-year-old switch-hitting infielder plays both 2B and 3B and is hitting .260 with six extra-base hits.
J.R. Murphy / Alex Avila: Along with 24-year-old starter Carson Kelly, the Dbacks have a three-headed catcher set-up. Kelly has started 29, Murphy 17, and Avila 15 behind the dish. They have combined for 14 homers and 33 RBIs, which would be third on the club from one player.
Greg Holland: The 33-year-old, nine-year big-league closer is a 3x All-Star and signed with Arizona as a free agent back in January. He led the NL in Save back in 2017 with Colorado, and is having a true shutdown season, allowing just 10 hits over 20.2 innings with a 28/10 K:BB while surrendering just one home run. He hasn’t allowed a run now in more than a month.
Archie Bradley: A 26-year-old power righty, Bradley has struck out 36 over 28.2 innings. However, he also has allowed 35 hits and has a 4.71 ERA and 1.814 WHIP. He has held the opposition scoreless in eight of his last 10 outings. He has four different outings where he was blown up over 27 appearances, so unless you catch him on a bad night, he can be real tough.
Andrew Chafin: The 29-year-old lefty has allowed 19 hits over 20.2 innings with a 25/10 K:BB.
Matt Andriese: 29-year-old righty began his career as a starter with Tampa Bay, but has made a nice transition to the bullpen. He was traded to Arizona last August and has allowed 31 hits over 34 innings with a 38/14 K:BB this season.
Yoan Lopez: Cuban native is in his first full big-league season. The 26-year-old has been strong across 30 games, allowing 17 hits over 25.2 innings with an 18/9 K:BB. 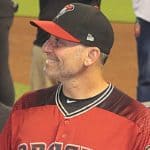 Lovullo is in his third season at the helm of the Dbacks. (Mwinog2777)

The Boston Red Sox bench coach for four seasons and a two-time minor league Manager of the Year, Torey Lovullo was finally given the chance at his first big-league managerial job in Arizona for the 2017 season after being a candidate for numerous jobs for years.
He led the club to 93 wins and a runner-up finish that year, winning the NL Wildcard Game before getting swept by the divison-rival Dodgers in an NLDS. For that work, Lovullo was honored as the NL’s Manager of the Year.
Lovullo turns 54-years-old next month, and has an overall 209-181 record as skipper in Arizona.

MONDAY: There is a 50/50 chance of showers and thunderstorms at the 7:05 pm first-pitch time, and that threat will remain about the same throughout the game. Temps in the mid-70’s with light winds.
TUESDAY: Should be a perfect night at the ballpark. Temps in the upper-70’s with a moderate breeze at the 7:05 pm first-pitch time. Sunny at the start, clear skies as the sun sets, almost no chance of rain.
WEDNESDAY: Another nice night in South Philly, with temps during the game in the mid-upper 70’s, moderate breeze, and almost no chance of rain.
Originally published at Phillies Nation as “Phillies series opposition preview: Arizona Diamondbacks“