The Philadelphia Phillies (23-16) have built up a four-game lead in the National League East Division standings over the course of the first seven weeks of the 2019 regular season.

In so doing, the Phillies have been far from dominant. In fact, the club has just one series sweep over what is fast approaching the two-month mark. That sweep came at home over the Atlanta Braves in the first series of the season back in late March.
Rather than dominating teams, the Phillies have demonstrated tremendous resiliency in fashioning an 8-3-2 series record. The club has now gone five straight match-ups (4-0-1) without losing a series. One big problem for the team has been the series opener. The Phillies have dropped the opening game in seven of the last eight series.
Only once, when they lost three out of four games at Coors Field to the Colorado Rockies in mid-April, did they fail to win the next game after losing that opener. Even that took a near-miracle for the host Rockies. In the second game of that series, Charlie Blackmon delivered a two-out, two-strike, walkoff two-run homer in the bottom of the 12th inning off Juan Nicasio to give Colorado a 4-3 win.
The Phillies have a very difficult stretch coming up. The schedule calls for them to meet the top teams in the National League over the next seven series when they face the Milwaukee Brewers twice and the Rockies, Chicago Cubs, Saint Louis Cardinals, Los Angeles Dodgers and San Diego Padres once each. 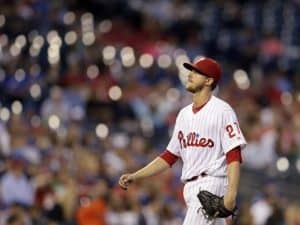 Nola takes the mound on Monday night hoping to help snap the Phillies frustrating streak of losing series openers.
It all begins with tonight’s (Monday) game against the Brew Crew at Citizens Bank Park. The Phillies will host the Brewers and Rockies for six games this week. It will be an important home stand in which to come away with a winning record since 13 of their following 16 will be on the road against that difficult competition.
The Phillies will look to begin reversing that series opener jinx when they send Aaron Nola to the mound. Nola has been on the mound for a pair of series-opening losses. On April 15 he lasted just four innings against the Mets, surrendering five earned runs on seven hits. He pitched well in a series opener against the Marlins just 10 days later, but received no support in a 3-1 loss.
A solid outing from Nola will not be the only key tonight, nor will Friday night’s series opener with the Rockies depend solely on rookie lefty Cole Irvin, who certainly earned the opportunity with his brilliant big-league debut on Sunday.
The Phillies position player lineup has produced just 16 total runs over the last eight series openers. For a group of hitters who often look like an offensive juggernaut most in many of their other games, their collective disappearance in openers has been perplexing.
But tonight is another night. The offense will try to get to Milwaukee’s 23-year-old Freddy Peralta, who has a 6.75 ERA coming into the game, and give Nola some runs with which to work. And manager Gabe Kapler needs to have his club ready to hit the ground running in this important home stand.
You can’t sweep a series without winning the opener first. The Phillies have taken the lead in the NL East by bouncing back to win series despite consistently dropping the first game. If they want to pull away, they are going to need to overcome this annoying habit of losing the opener, get out the brooms, and sweep a few teams along the way.
Originally published at Phillies Nation as “Resilient Phillies are winning despite frustrating habit of losing openers“