The Philadelphia Phillies announced this morning that club chairman and minority owner David Montgomery has passed away at the age of 72 years. Montgomery had battled cancer for more than five years.

In an official release from the team (see below Twitter link), majority owner John Middleton stated the following:
“David was one of Philadelphia’s most influential business and civic leaders in his generation. For 25 years, he has been an invaluable business partner and, more importantly, an invaluable friend. He was beloved by everyone at the Phillies. Leigh and I are saddened beyond words at David’s passing and extend our love and sympathy to Lyn, his children and grandchildren.”
Born and raised on Pembrook Road in the Roxborough section of Philadelphia, Montgomery graduated from both William Penn Charter High School and the University of Pennsylvania. He then continued his education at The Wharton School, where he graduated in 1970.
While at Penn, Montgomery was a classmate and friend of future Philadelphia Mayor and Pennsylvania Governor Ed Rendell. The two would attend Phillies games together at old Connie Mack Stadium, and per a 2008 piece by Tyler Kepner in the New York Times, they were typical Philly fans. Kepner wrote:
“They would try to eat all the food that $5 could buy — back when hot dogs cost 50 cents — as they shared their thoughts with the players. “I remember one time riding Turk Farrell,” Rendell said, referring to a Phillies reliever of the 1960s. “He got so mad he looked like he was going to throw a ball at us, and Turk could really hum the ball. We were scared to death.””
After they graduated, Rendell tried to get Montgomery to apply for a job with basketball’s Philadelphia 76ers franchise. Instead, in 1971 Montgomery got a job in the sales office of baseball’s Philadelphia Phillies through a connection with the club’s former pitching great, Robin Roberts, as well as through his connections made while coaching with the Germantown Academy football team. 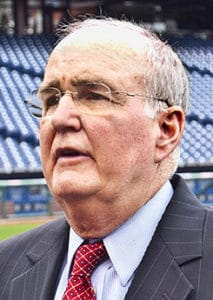 Phillies chairman and minority owner David Montgomery passed away earlier today after a six-year battle with cancer. (Centpacrr)
In that first job with the team he sold season and group ticket packages. Montgomery was also briefly the scoreboard operator at Veteran’s Stadium in the early years of that facility.
Within a few years he became the Phillies director of sales and marketing, and then in 1980 became the head of the Phillies business department. That same year, the franchise celebrated the first World Series victory in its then 97-year history.
In 1981, Montgomery joined a group headed by Bill Giles to organize the purchase of the Phillies from the Carpenter family. Montgomery was named as the executive vice-president following that purchase, and then was elevated to the role of chief operating officer in 1992.
In 1994, Montgomery acquired an even greater ownership interest in the team. Then in 1997 he was named to replace Giles as the 14th team president in franchise history. He was the first Philly native to run the club in six decades.
In the club’s official release (below Twitter link), Giles stated the following:
“David was truly a great man. I have never known a person with more integrity or who truly cared so much about everyone who worked for the Phillies. He and I worked hand-in-hand for over 30 years. During that time, I saw his unparalleled love for his family, the Phillies and the team’s fans, and of course, the City of Philadelphia…He will be tremendously missed by all who had the pleasure of knowing him.”
Cancer first affected Montgomery in the operation of the team when he left on an interim basis for treatment of jaw cancer in August 2014. After returning in January 2015, Montgomery took on the title of chairman, which he held until his passing, with Pat Gillick replacing him as the club president.
During his long career in baseball, Montgomery also served as the vice chair of the Board of Directors of Major League Baseball Enterprises (formerly MLB Properties) and was a member of the MLB Executive Council. He was a member of the MLB Schedule Committee, the Labor Policy Committee, and the Commissioner’s Special Committee for On-Field Matters.
Last March, the Phillies named their new indoor facility at the Carpenter Complex, their spring training home in Clearwater, Florida, as the “David P. Montgomery Baseball Performance Center” in his honor. On the occasion of that honor, Montgomery was quoted as follows in a piece by Matt Breen for Philly.com:
“The word is overwhelmed but the reality is that it was special that the whole organization was here because, as you know, that’s what I believe in. I believe that in whatever capacity you work for us, you determine the Phillies family. I believe that.”
View image on Twitter 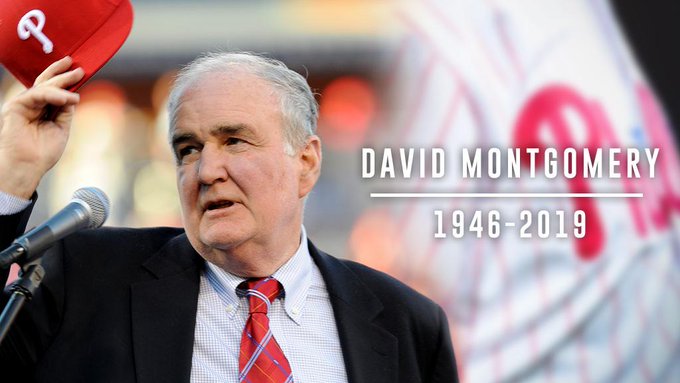 Official release on the passing of our Chairman, David P. Montgomery: https://atmlb.com/2J6WGST

425 people are talking about this
Twitter Ads info and privacy
This past November, the former ‘Daisy Field’ ball fields on which Montgomery played during his Little League days with the Andorra A’s out in Wissahickon were re-named in his honor as well.
Montgomery is survived by his wife Lyn; their three children, and three grandchildren. Memorial services are pending, and we will pass those along at our social media sites when available. Our entire staff joins with all of Phillies Nation in mourning the passing of not just a great baseball man, but an outstanding Philadelphian.
Originally published at Phillies Nation as “Phillies chairman and minority owner David Montgomery passes away“