The Washington Nationals (14 – 18) came from behind with a big 8th inning rally to defeat the Philadelphia Phillies (18 – 14) by 10-8 on Saturday night at Citizens Bank Park.

With the defeat, the Phillies lead in the National League East Division standings dropped to two games in the loss column.
Prior to the game, the Phillies honored the franchise all-time Hit King, Jimmy Rollins, on the occasion of his formal retirement from Major League Baseball.
The ceremony included JRoll’s family, his two managers with the club in Larry Bowa and Charlie Manuel and a number of former teammates including Bobby Abreu, Wayne Gomes, Marlon Anderson and Shane Victorino.

178 people are talking about this
As the game got underway, the Nationals broke on top first, getting to Phillies starter Jake Arrieta for three hits and a run in the top of the 1st inning. Arrieta avoided some trouble with the help of a nice 6-4-3 doubleplay.
In the bottom of the 1st, the Phillies got even. Jean Segura lined a one-out base hit to left field. That was followed by a Bryce Harper double ripped to the wall in left-center. Then J.T. Realmuto lifted a short fly to right field. Segura tug and raced home, sliding in safely as the throw home got away from Nationals catcher Yan Gomes.
The Phillies grabbed a lead in the bottom of the 2nd inning when Segura drilled a double to center field, scoring Sean Rodriguez to make it a 2-1 game. Arrieta struck out the first two in the top of the 3rd inning, but then Brian Dozier crushed a no-doubt solo home run to left field, tying the game up at 2-2.

Washington first baseman Matt Adams had to leave the game due to a jammed shoulder suffered when he made a nice diving play and raced back to the bag to rob Phil Gosselin of a hit. Adams was replaced defensively by former Phillies player Howie Kendrick moving from third to first base, and Wilmer Difo entering the game at third.
The Phillies regained the lead when Gosselin singled, move to second on a sac bunt by Arrieta, and scored on a double by Andrew McCutchen. But once again the lead didn’t last long. In the top of the 5th, Victor Robles singled, went to second when Arrieta threw away a pickoff attempt, moved to third on a ground out, and scored on a sac fly by Adam Eaton.
In the bottom of the 6th inning, the Phillies put two men in scoring position with one out. Corbin powered his way out of trouble, striking out Cesar Hernandez as a pinch-hitter for Arrieta and then McCutchen on a nice 2-2 slider. That would be it for Corbin, but he had managed to keep his team in it on an unusually rough night, leaving with the game still knotted at 3-3.
The Nats jumped on top in the 7th against Phillies reliever Juan Nicasio, who imploded to surrender two hits and made a key throwing error, resulting in a pair of Washington runs.
With the Nationals up by 5-3, manager Dave Martinez went to his bullpen for Joe Ross. The Phillies would make him regret that decision. Segura started the inning with an infield hit, which was followed by a walk to Harper. Rhys Hoskins then doubled to left, scoring Segura, with Harper moving to third.
Realmuto then crushed a double to right-center, and as the ball one-hopped off the wall both Harper and Hoskins scored to put the Phillies back on top. One out later, Rodriguez ripped a double to almost the exact same spot, scoring Realmuto. That was followed by Gosselin ripping a double down the third base line, and suddenly the Phillies had scored five runs and had built an 8-5 lead. 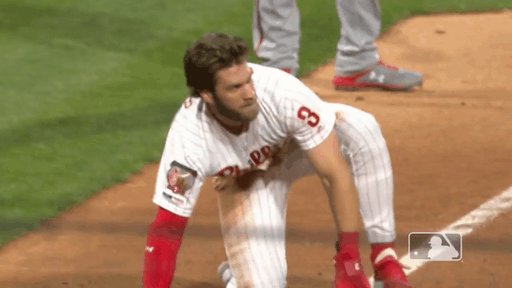 How are we feeling after that inning, Philly?

466 people are talking about this
Twitter Ads info and privacy
Pat Neshek came on for the 8th inning and yielded a pair of hits. With runners on the corners and two outs, Phillies skipper Gabe Kapler decided to turn to lefty reliever Adam Morgan, who had a franchise-record 16 consecutive scoreless appearances entering this game.
It seemed like a great idea, but it just didn’t work out. Pinch-hitter Kurt Suzuki stepped in against Morgan and blasted a three-run homer to tie the game. Robles then came up and took Morgan out to right field on the very next pitch. Just like that, the Nationals had a taken 9-8 lead.
The Nationals then built on to their lead in the top of the 9th, moving out to a 10-8 lead, and the Phillies were lucky it wasn’t any worse. In the bottom of the 9th, closer Sean Doolittle came on to nail it down for the visitors. He allowed a one-out base hit to Franco followed by a walk to Rodriguez. But Doolittle responded by getting a pair of pinch-hitters to pop out, Andrew Knapp to center and Odubel Herrera to third base foul territory.

Robles didn’t even start this game, coming on only due to an injury to Michael Taylor. But Robles would go 2-2, and it was his solo home run just over the wall in right-center field that gave the Nationals their 9-8 lead in the top of the 8th inning. Honorable mention to Suzuki for his game-tying three-run blast.