The Philadelphia Phillies (4-1) return home following a brief but eventful two-game series split with the division rival Washington Nationals down at Nationals Park in our nation’s capital earlier this week.

The pair of emotional games in D.C., especially Tuesday night’s nationally televised tilt, were important on many fronts. One was that it allowed these two teams, who many feel will battle for the NL East Division crown, to size one another up.
Another was that it allowed new Phillies superstar Bryce Harper to get the drama of returning to the place where he played the first seven seasons of his big-league career out of the way with in the early days of the season.
With that drama behind them the club can begin to focus on the lengthy six-month regular season. The Phillies should also begin to settle into much more of a normal baseball routine now as well. After experiencing three off-days over the first week there will be just two more over the rest of the month of April.

The Phillies welcome in the Minnesota Twins (4-1) of the American League Central Division for the first interleague series of the 2019 campaign. The two teams have not met since a three-game set at Target Field in Minnesota back in June of 2016, and this is their first series against one another at Citizens Bank Park since June of 2010. The Twins hold a 10-8 edge in the all-time series between the clubs.
Minnesota has won three in a row entering this series to take an early lead in that AL Central Division race. Each of their last two victories have come thanks to late inning rallies in Kansas City.
Despite the retirement of popular hometown franchise icon Joe Mauer, the Twins were a popular choice among many preseason pundits as a surprise American League playoff contender. 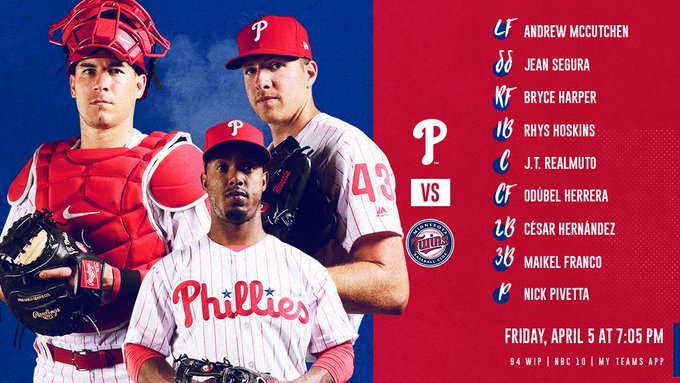 The Minnesota offensive attack has been led by 38-year-old, 15-year veteran Nelson Cruz. The regular Designated Hitter, Cruz leads the Twins in RBI with six and has their only home run to this point. He has not played the field yet in 2019.
25-year-old shorstop Jorge Polanco is tied with Cruz and former Phillies farm hand Willians Astudillo for the club lead in hits with six and his three extra-base hits are tied with Astudillo and center fielder Byron Buxton for the Twins lead in that category. 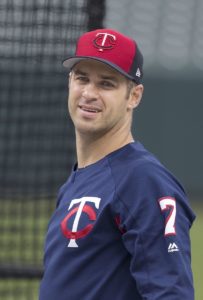 The Phillies and the rest of baseball will no longer have to deal with Joe Mauer. The 6x AL All-Star and 2009 AL MVP has retired after a 15-year big-league career. (Keith Allison)
A 27-year-old second-year service time rookie, Astudillo has seen action at three positions including two games behind the plate. He was originally signed by the Phillies out of his native Venezuela as a 17-year-old back in December 2008.
Astudillo rose only to High-A Clearwater by 2015 and became a minor league free agent following that season, signing with the Atlanta Braves. He then bounced from Atlanta to the Arizona Diamondbacks before catching on with the Twins in November 2017.
The perennially underachieving or injured Buxton, easily Minnesota’s most talented ball player, finds himself banged up yet again after running into a wall on Tuesday night in Kansas City. He is out for the opener of this series and is considered day-to-day with bruised ribs.
Also out of the lineup is slugging third baseman Miguel Sano, sidelined following a laceration to his right leg during spring training. He is not due back until some point in May.
The Twins bullpen has been solid thus far, surrendering just five earned runs and a dozen hits over their first 16.2 innings. Three of those runs came in one burst, when lefty Martin Perez gave up a three-run double to former Phillies first baseman Carlos Santana in the eighth inning last Sunday.
One of the key arms in that bullpen is another former Phillies prospect. Right-hander Trevor May was the fourth round pick of the Phillies in the 2008 MLB Amateur Draft out of high school in Washington state. He was dealt to Minnesota in December 2012 along with pitcher Vance Worley in exchange for outfielder Ben Revere.

Beyond the Box Score

Willians Astudillo is projected to have a higher WAR/600 PA than Trevor Story, Anthony Rizzo, Lorenzo Cain, George Springer, and Matt Carpenter among others in 2020 (ZiPS)

See Beyond the Box Score’s other Tweets
This would appear to be a mismatch on paper, with the Phillies clearly possessing greater lineup firepower. The best chance for Minnesota would appear to be in keeping the games close into the later innings, allowing their bullpen to shut the Phillies down, and then picking up a big hit to steal a game or two. That was the winning formula in their previous series out in Kansas City.
Bryce Harper is slashing .500/.652/1.188, has homered in three straight games, and also has a pair of doubles and seven walks. Maikel Franco has slashed .400/.591/1.000 from the eight-hole with three homers, seven walks, and a team-leading seven RBI in the early going. Jean Segura is hitting .364 with a .391 OBP, two doubles and four RBI.