The Philadelphia Phillies are scheduled to begin a highly-anticipated 2019 regular season one week from tomorrow. Including the Wednesday afternoon game in Clearwater against the Detroit Tigers there are just six game dates remaining on the Grapefruit League schedule. Two of those will be split-squad affairs.

Opportunities for the players to experience game conditions prior to Opening Day are dwindling quickly. With that in mind there are a number of Phillies players still battling injury issues which will hinder their ability to participate.
Scott Lauber of Philly.com noted this morning that first baseman Rhys Hoskins is suffering from a sore shoulder. He is being held out of game action at least through Friday, but at this point it is believed that he will be in the lineup against the Atlanta Braves on March 28 at Citizens Bank Park. He still hopes to be able to play in a couple of spring training games before then.
Lauber further noted that the Phillies would move starting third baseman Maikel Franco over to first base on Friday, and that Franco would cover the position if a longer term need were to arise. The Phillies would play Scott Kingery at the hot corner in such a scenario. 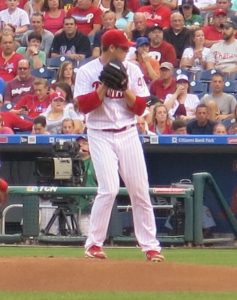 Jerad Eickhoff has returned to the mound following off-season carpal tunnel surgery. He should start at Triple-A. (D. Benjamin Miller/WikiCommons)
Jim Salisbury of NBC Sports Philadelphia reported on Tuesday that both Roman Quinn and Tommy Hunter would likely open the season on the Injured List. Quinn suffered an oblique strain back in late February and has appeared in just one game down in Florida. Hunter was shut down at around the same time with a strain in the flexor muscle of his right pitching arm.
Also on the mound, Jerad Eickhoff underwent carpal tunnel syndrome surgery back in October. The right-hander had experienced some recurring symptoms in January which slowed his entry to spring games.

Eickhoff has now made two starts and is on track to open the season as part of the Triple-A Lehigh Valley starting rotation. As long as he remains healthy, he would likely be the first pitcher to be re-called should a need arise in the Phillies rotation.

Bryce Harper returned to the lineup as the Designated Hitter during Sunday’s game against the New York Yankees. This was following the ugly incident in which he took a fastball directly off the ankle last Friday. Thankfully, x-rays were negative. He did not make the trip east to begin this week, but is back in right field on Wednesday and will be ready to go for Opening Day.
The Phillies got Odubel Herrera into a Grapefruit League lineup for the first time over this past weekend. He served as the DH on Saturday and then started in center field on both Sunday and Monday. Herrera had strained a hamstring during a mid-February baserunning drill.
Cesar Hernandez returned to the lineup late last week after being out since late February after suffering a right hip flexor strain while running the bases in an early spring game.
Hoskins is the one injury to really watch for over the next four-to-five days. He is a key piece to the Phillies offensive attack and the club would really like to get him back into the lineup for a couple of games before Opening Day.
Originally published at Phillies Nation as “Rhys Hoskins out with sore shoulder; Updates on spring injured Phillies players“