Lance Parrish had been one of baseball’s top catchers

Excitement surrounding the Philadelphia Phillies has skyrocketed over the nearly two weeks since the announcement that Bryce Harper had agreed to a contract with the team.

Harper was the biggest piece to an off-season puzzle put together by principal owner John Middleton and general manager Matt Klentak, turning the Phillies from an interesting young team into an immediate title contender.
The club also signed a former National League Most Valuable Player, Andrew McCutchen and one of the top relievers in baseball over the last decade, David Robertson, in free agency. However, it was the signing of Harper which lit up the phone lines in the ticket sales office and actually drove fans to the Phillies website to grab seats for 2019 ball games.
Harper is one of the top players in the game today. He becomes the latest in a series of high-profile free agent stars from Pete Rose in 1978 to Jim Thome in 2002 to Cliff Lee in 2010 to choose Philadelphia as their new home. He is by far the youngest and is expected to impact the organization for a far longer time period than any free agent addition in franchise history.
Signing a big-name All-Star in free agency has not always worked out for the Phillies, however. The two biggest during the decades of the 1980’s and the 1990’s each ended up a major let-down. Neither of those players would produce to the standards they had set in their respective careers prior to their arrival in Philadelphia. Neither would help the team to achieve success. Here is a look back at those two disappointing free agent signings.
Lance Parrish 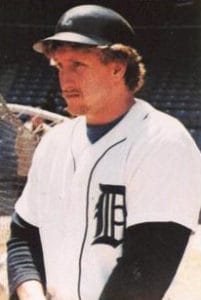 Lance Parrish was a slugging catcher who appeared to be just what the late-80’s Phillies needed to return to contention. (KG Graphics/WikiCommons)
The Phillies of the mid-late 1980’s began to fall on some hard times as management tried one of the toughest tricks in baseball, rebuilding while continuing to win. It wasn’t working out real well. The 1984 Phillies slipped to the .500 mark at 81-81, and the following year suffered the first losing season for the team in a decade.
In 1986, the Phillies bounced back to finish 86-75. It was the third-best record in the National League, but still only good enough for second place, 22 games behind a mega-talented New York Mets club that would go on to win the World Series.
Still, the Phillies felt that they were back. Schmidt had won his third NL MVP and was still going strong at age 36. Juan Samuel, Von Hayes and Glenn Wilson were providing solid support.
The catching position was in a state of flux. Ozzie Virgil Jr, who had been an NL All-Star in 1985, had been traded to the Atlanta Braves in a deal that brought closer Steve Bedrosian and outfielder Milt Thompson to the Phillies.
In the 1986 season, 25-year-old John Russell was the starter behind the plate and caught in 93 games. He was supported by Ronn Reynolds, a 27-year-old who came over from the Mets and caught in 43 games and a skinny 24-year-old named Darren Daulton who caught 49 times.
On the free agent market in the off-season the club decided to close the gap with the Mets by upgrading behind the dish. The 30-year-old Parrish, one of the top catchers in the game at the time, had become a free agent. The Phillies jumped, inking him to a two-year contract at $1 million per season.
Parrish had been an AL All-Star catcher in the previous five years and six of the prior seven seasons with the Detroit Tigers. He was a five-time Silver Slugger winner as well as a three-time Gold Glove Award winner, and a key cog in their 1984 World Series championship team.
His first game with the Phillies came on April 7, 1987 at Atlanta-Fulton County Stadium. Much as with Rose’s first game in the powder blue road unis of the time, it was nothing to write home about. The Phillies were shutout that night by Rick Mahler, who surrendered just three hits in a complete game effort. Parrish went 0-2 with a walk.
The 1987 Phillies never got going. They lost their first four game, eight of their first nine, and were ten games under the .500 mark in early May.
A big push from late-June through late-August during which they went 35-18 pushed them nine games over the .500 mark and moved the club within 6.5 games of first place. But they would go just 13-25 from that point, finishing in fourth place, 15 games out.
In 1988 the Phillies sank to the bottom of the NL East standings like a stone right from the outset. They were 7.5 out by the end of April, 14 games back by the end of May, and were 16 out at the MLB All-Star break. Things only got worse after that point. The team went 29-47 after the break to finish in last place, 36.5 games behind the leaders.
To say that the two seasons with Parrish were disappointing would be an understatement. Not only did the team fail the fans, but so did he, slashing just .230/.304/.385 with 32 homers, 38 doubles and 127 RBI over 253 games with the Phillies.
Gregg Jefferies
Jefferies arrived with the Phillies at an unusual time for both the franchise and the game. He signed a four-year, $20 million deal as a free agent on December 14, 1994. At the time, Major League Baseball was still in the midst of a player strike that had seen the World Series cancelled for the first time since its inception. The strike would finally be resolved on April 2, 1995 and the season would begin three weeks later.
The Phillies had been the surprise 1993 NL pennant winners. But at the time the strike they were just 54-61 and struggling along in fourth place. One of the most popular veterans of that team, John Kruk, was turning 33-years-old and became a free agent. 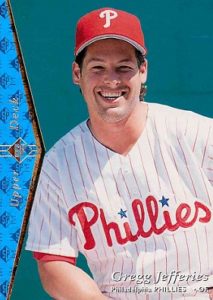 Jefferies wasn’t bad in his time with the Phillies. He was just never very good, and after early promise, neither was the team. (1995 Upper Deck SP)
Re-tooling their lineup, the club decided to bring back former third baseman Charlie Hayes as a free agent as soon as the strike was ended. That moved incumbent Dave Hollins over to first base to take Kruk’s spot.
Jefferies couldn’t agree to contract terms with the Saint Louis Cardinals, and chose to leave for the Phillies. He would end up splitting time between left field and first base in his first two seasons with the club, and then become the full-time starting left fielder in the last two.
Just 27-years-old when he signed, the Phillies appeared to be getting one of the top pure hitters in the game as he was entering his prime.
Jefferies had reached Major League Baseball at just age 19 when he was the youngest player in the NL with the 1987 New York Mets. He finished 3rd in the 1989 NL Rookie of the Year voting, and then hit .342 and .325 and had been an NL All-Star in each of the two seasons with the Cardinals prior to his arrival in Philadelphia.
The hope was that he could bring a similar skill set as Kruk had provided. A slashing doubles hitter who could get on-base frequently. His ability to play the outfield also allowed manager Jim Fregosi some versatility in lineup construction.
Much of the 1993 popular core was still around, including Hollins, Curt Schilling, Darren Daulton, Lenny Dykstra, Jim Eisenreich, Mariano Duncan, Mickey Morandini and Kevin Stocker. It was hoped that the additions of Jefferies and Hayes would help the club return to contending status.
Jefferies debuted on April 26, 1995 at Busch Stadium against the Cardinals in Saint Louis. The host Redbirds would rally from an early 5-0 deficit, scoring a pair of runs in the bottom of the 9th inning for a 7-6 walkoff victory. Jefferies went 1-4 with a walk, run scored, and a stolen base. He was also thrown out stealing.
The 1995 Phillies came out like gang-busters. With baseball back, that club ran out to a 37-18 record by June 25, building a 4.5 game lead in the NL East. Then the inexplicable happened. They returned home for a seven-game homestand and won just once. It was the beginning of a horrendous slide in which the club would lose 20 of their next 26 games.
They never recovered, falling further and further out in the division. The 1995 Phillies would finish tied for second place, but at 69-75 were 21 games behind the division-winning Atlanta Braves, who would go on to win the World Series that year.
Jefferies would have one major individual highlight during the 1995 season. On August 26 he became the first Phillies player in 32 years to hit for ‘The Cycle’ when he did it against the Los Angeles Dodgers at Veteran’s Stadium.
That 1995 season would be the first of four consecutive big losing seasons during Jefferies years with the Phillies. It became a period in which the team, rather than finding a way to continue the 1993 success, would instead increasingly move through transition. By his final year in 1998, Jefferies was teammates with the likes of Scott Rolen, Bobby Abreu and Mike Lieberthal. But they were the future, and he was pretty much finished.
Over his four seasons in Philadelphia, Jefferies slashed .287/.340/.411 with 95 doubles and 52 stolen bases. He wasn’t a bad player – he just wasn’t a very good one either. While it was never expected that he would carry the team, it was hoped that he would remain an All-Star caliber player who would help the Phillies back to contention. After those first two months, they never came close.
With the signing of Harper, a new era is clearly dawning in the history of Phillies baseball. It is a near certainty that he will prove a far more positive influence on that history than either Parrish or Jefferies. Fans are hoping that by the time his 13-year contract is finished, the Harper-era Phillies will not only have surpassed the results of the Lee and Thome clubs, but even the World Series-winning Rose team.
Originally published at Phillies Nation as “Big-name free agents Lance Parrish and Gregg Jefferies didn’t work out for the Phillies“