It happens every year at this time. Major League Baseball teams open spring training camps and there are a number of players on hand about whom many fans have never heard.

The Philadelphia Phillies are no exception. So when the club announced the starting lineup for Friday afternoon’s first game of the 2019 Grapefruit League schedule, it was really no surprise to find that it contained a trio of such names.
The players trotting out onto the field at Charlotte Sports Park for the 1:30pm opener against the host Tampa Bay Rays will include first baseman Austin Listi, second baseman Andrew Romine and right fielder Shane Robinson.
Listi was the 2018 Paul Owens Award winner as the Phillies top performing minor league position player. The 25-year-old Texas native was the club’s 17th round choice in the 2017 MLB Amateur Draft out of Dallas Baptist University.
Splitting last season almost evenly between High-A Clearwater and Double-A Reading, Listi slashed .312/.412/.502 with 18 home runs, 84 RBI and a .915 OPS. He appeared in 34 games at first base and 31 games as a corner outfielder combined at the two levels, and even saw three games at third base with Reading. Listi went on to play in the Arizona Fall League where he slashed just .250/.321/.303 with Scottsdale.
Romine is a 33-year-old who has managed to appear in parts of nine big-league seasons despite just a .235/.291/.301 career slash line across 1,323 plate appearances.
The brother of New York Yankees backup catcher Austin Romine, Andrew has built his career on defensive versatility. He has appeared at every position on the diamond in Major League Baseball, including one game behind the plate and seven appearances on the mound.
Robinson is a 34-year-old who, like Romine, also has seen action in nine big-league seasons despite poor offensive numbers. The Florida native has a career .221/.288/.292 slash line with 18 games of postseason experience coming off the bench for the Saint Louis Cardinals in 2012 and 2013.
Winner of the 2005 College Baseball National Player of the Year award at Florida State University, Robinson is known for his outfield defense. Baseball America rated him the top defensive outfielder in the Cardinals organization in both 2009 and 2010.
View image on Twitter 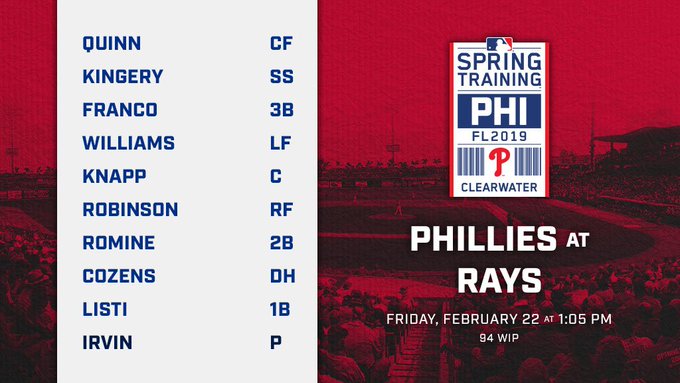 606 people are talking about this
Twitter Ads info and privacy
All three can be considered extreme longshots to actually break camp at the end of March and head north to Philadelphia. But two of them have already enjoyed long tastes of the big-league life, and Listi is hungry for his own first experience at first-class living. Their fight to stand out and earn a 2019 spot with the Phillies or some other team begins today.
Originally published at Phillies Nation as “Phillies first Grapefruit League lineup contains trio of ‘Who dat?’ players“