According to a number of reliable sources, the San Diego Padres have come to an agreement with free agent infielder Manny Machado.

The deal is reportedly for 10 years and $300 million, which would make it the largest total dollar value guaranteed contract in American sports history. There is also reportedly a player opt-out after the fifth year in the deal.
This deal also pushes the Padres, who entered the pursuit late in the off-season as a “mystery team”, over the $100 million total salary mark for the first time in franchise history.
With top prospect Fernando Tatis Jr considered nearly ready at shortstop, the Padres could either play Machado at third base and go with Luis Urias at short for now, or begin 2019 with Machado at short until Tatis is ready.
The Phillies were considered an early favorite for Machado, who met with club officials back in December at Citizens Bank Park. Despite both sides saying all of the right polite things, nothing seemed to ever get close between the Phillies and Machado.
The Chicago White Sox were considered co-favorites for Machado’s services at one point. The Chisox added Machado’s brother-in-law, Yonder Alonso, and signed their workout partner Jon Jay in order to help lure the free agent. Chicago reportedly had a seven-year, $175-million dollar offer on the table for the infielder and were confident in their chances.
Don’t be surprised if the White Sox now shift their full focus and resources into a battle with the Phillies in trying to lure Bryce Harper, with the San Francisco Giants and his former Washington Nationals team also still in the hunt.
The Machado contract is certainly going to establish a base in Harper negotiations. It would not be surprising to see the outfielder get something along the lines of a 10-year deal worth between $325-350 million with a similar opt-out.

4,283 people are talking about this
Robert Raiola, CPA and Director of Sports & Entertainment for the PKF O’Connor Davies accounting and advisory firm speculated just yesterday that such a large contract for both Machado and Harper would likely contain language to protect it from high California taxation.

Both players will ask for large signing bonus'(SB) as part of contracts. Both players rep live in no tax state. If proper language is included in contracts,(sb) will not be taxed in state where team is based

Deferred comp will likely be part of both deals.

100 people are talking about this
You might ask why a player such as Machado would want to sign long-term with an organization such as the Padres? It’s a logical question, since San Diego has been a perennial loser since entering Major League Baseball as part of the 1969 expansion.
The Padres have participate in 50 seasons and have reached the postseason just five times, during each of the five seasons in which they have won the NL West crown: 1984, 1996, 1998, and 2005-06. The team has experienced just 14 winning campaigns, and has finished with a losing record for the last eight years. Last season, the Padres finished at 66-96 and in the division basement for the second time in three years.
But the San Diego executive team led by chairman Ron Fowler, general partner Peter Seidler, and executive vice-president A.J. Preller are committed to changing the perception of the club. The Padres were recently ranked by Baseball America as having the top minor league talent in the game.
They made an initial splash one year ago when they lured veteran first baseman Eric Hosmer with an eight-year, $144 million free agent contract that lasts through 2015. Earlier this off-season the Padres added veteran second baseman Ian Kinsler with a two-year, $8 million deal.
For the Phillies, this means that all of their eggs are now in one basket. Despite the proclamations of management that the off-season is a success without landing one of the two biggest names, that is not how the fan base sees it. If the Phillies now fail to finalize a deal with Harper they can expect considerable backlash from those fans. 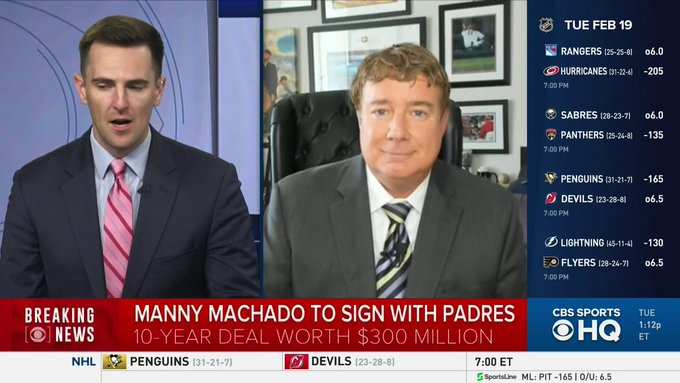 “One thing’s for sure, Harper is going to get more than Machado.”

With Manny Machado off the board, @JimBowdenGM predicts Bryce Harper’s potential contract and destination.

40 people are talking about this
Twitter Ads info and privacy
The pressure is now on, and the focus now appears clearly on one prize, the top prize: Bryce Harper. There will be increased competition from at least the White Sox. It is now time for the Phillies ownership and management to put up or shut up and bag the big game name in what has been an agonizingly lengthy off-season free agent hunt.
Originally published at Phillies Nation as “BREAKING: Padres reportedly land Manny Machado“