A Washington radio host is reporting Harper has made a decision

Everyone in Phillies Nation has been waiting with growing impatience for a final decision from free agents Bryce Harper and Manny Machado.

If the alleged “real good source” to 106.7 The Fan sports talk broadcaster Chris Russell is to be believed, the process for Harper may be now winding to a close.
Russell stated on the air on Thursday that the superstar outfielder’s decision would “come in the next 24 hours” and added that he did not believe that Harper would be returning to the Nationals.
Then today, Russell joined local Philly FM sports talk Philly 94 WIP’s Midday Show and stated the following:

“… I’m led to believe by the people that I’ve talked to that are close to the situation—and I have, again, a real good source that has helped me through this process, let’s just leave it at that, that Bryce was in a mood to celebrate yesterday.”

“Now, the source said, ‘I believe it’s done.’ I don’t have concrete, 100 percent proof for you guys. I wish I did, otherwise I would have it and I would be running around with it. But I don’t have that, so I want to caution everybody in Philadelphia. But that’s what I was lead to believe, that this thing is now decided.”
Russell went on to elaborate that if no formal contract has yet been extended, then there may simply have been an agreement reached. That would mean that specific contract details need to be worked out before any actual announcement might come.
Ben Krimmel at the 106.7 The Fan further quoted Russell: “I was, again, led to believe that there was some stuff going on yesterday in Las Vegas that indicated to me and my source that Bryce Harper was done with this decision. But it could still take a couple of days to get everything ironed out.”
Information from Russell’s supposed source might be given a bit more credence than some of the other information coming out regarding the Harper situation. It was this source that revealed the San Francisco Giants recent interest in the free agent slugger.
Phillies general manager Matt Klentak stated yesterday that he believes the club has enjoyed a strong off-season and responded to the many fans who have been vocal in expressing that, despite all of the team’s moves to date, the failure to land either Harper or Machado would prove fatal to the club’s chances of truly competing in the 2019 season.
Klentak was quoted by Matt Breen at Philly.com: “The notion that we hear is that if we fail to sign a big free agent, then it’s a failure of an offseason. I don’t agree with that. I’m not trying to throw cold water on the idea that we may still sign a free agent. We are going to continue to explore that market because there are several really good free agents out there.” 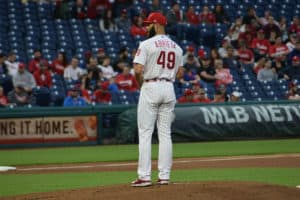 Jake Arrieta didn’t sign with the Phillies last spring until March 12. (Ian D’Andrea/Flickr)
Starting pitcher Jake Arrieta, who did not sign with the Phillies last spring until March 12, was quoted on the situation by Jim Salisbury of NBC Sports Philadelphia:
“I was in that same boat…They want to be in camp with their teammates. That was the hardest part for me, not being in Clearwater with these guys for the first three weeks — not getting to develop those relationships, get to know the catchers, the coaching staff. That’s tough…It’s tough on them and their families to not have a team to be with. Even though those guys are going to get taken care of financially, it’s still tough on them not being in a clubhouse and getting to cultivate those relationships that are so important for everyone on the team.”
Besides the obviously headline-grabbing nature of a “this thing is now decided” comment, Russell had another interesting opinion to share towards the end of today’s WIP interview when he stated the following regarding Harper: “I don’t think he likes the extreme intensity and rabid, rabid, critical nature of a Philadelphia, or a New York, of a Boston, and that, I think, is important.”
One thing that Russell never said at any time is that he believes that Harper, if indeed a decision has been made, will be choosing the Phillies. In fact, based on that last comment, Russell would have to believe that San Francisco is a more likely destination.
You can listen to the entire interview conducted by WIP Midday Show hosts Joe DeCamara and Jon Ritchie with Russell at the embedded link above within the body of this story. If Russell’s “source” proves to have good information, we should see an end to the Harper free agency saga any day now. But even if so, will it prove to be a happy ending for Phillies fans?
Originally published at Phillies Nation as “D.C. sports radio broadcaster says ‘I believe it’s done’ regarding Bryce Harper deal“