The Philadelphia Phillies completed a big trade this afternoon, landing all-star catcher J.T. Realmuto from the Miami Marlins. As part of the package sent to Miami, the Phillies gave up their top prospect, pitcher Sixto Sanchez.

As with most deals in which a team parts with its number one prospect for a veteran, there was a segment of the Phillies fan base who vocally lamented the inclusion of Sanchez in this trade.
What those fans need to remember is that prospects are one thing and one thing only – an asset for a Major League Baseball organization. That asset could one day come up to the big club and help the team win directly. They could also be utilized as a chip in a deal to help improve the big club. Both are legitimate uses of prospect talent.
A decade ago, the Phillies dealt away another top pitching prospect in a big trade for an all-star. That pitching prospect was named Kyle Drabek, and he was used as a piece to acquire a veteran pitcher named Roy Halladay.
One comment that I read today opined that the talent levels of Drabek and Sanchez were completely different. I also saw someone make the argument that Drabek was dealt for a “Hall of Famer”, while the Phillies “only” got a modest catcher upgrade for Sanchez. I think those arguments are specious and ignore the actual facts and talent levels of the players involved at the time of the respective deals.
Let’s travel back nearly a decade in time. When Baseball America released their 2010 Prospect Handbook, one of the most respected prospect reports in the game, Drabek was rated as the Phillies #2 prospect behind outfielder Domonic Brown.
While some Phillies fans might scoff at that, the fact remains that back then, Brown was considered one of the very top prospects in the entire sport. In fact, Brown would reach a point where he was ranked as the #1 prospect in all of baseball. Three different evaluators from Baseball America released their individual Top 50 Prospects lists in that publication.
Jim Callis ranked Drabek as the #18 overall prospect in the game and the fifth-highest ranked pitcher. John Manuel had Drabek at #16 overall, and the sixth-best overall pitching prospect. Will Lingo placed Drabek at #30 overall and the game’s ninth-rated pitching prospect.
In his scouting report, the son of 1990 NL Cy Young Award winner Doug Drabek was said to possess “the organization’s best curveball, a power downer that he can bury or throw for strikes.” There were scouts that gave the pitch a 70-grade. He also threw a fastball that usually ran in the low-90’s with “solid-average life.”
Drabek’s athleticism, coordination, and competitiveness were all considered at the top of the charts. In short, the right-hander selected at 18th overall in the first round of the 2006 MLB Amateur Draft by the Phillies was considered as close to a can’t-miss prospect as you can get.
To say that Halladay was a Hall of Famer is disengenous, because he was not one at the time of this deal. At that time, Doc was already 32-years-old and had pitched parts of a dozen seasons with Toronto. He had 148 wins and 1,495 strikeouts, had won a Cy Young Award, and had six AL all-star honors on his record.
That is a strong career, but there are many pitchers with a similar resume who never reach the Hall of Fame. Trying to gauge what a pitcher is going to accomplish after age 32 is a risky proposition at best.
With the benefit of hindsight, we can of course understand how Halladay was elected to the Hall of Fame last month in his first year on the ballot. But at the time of the trade, no one knew that he was going to win an NL Cy Young, finish runner-up the following year, pitch a perfect game, and toss a playoff no-hitter with the Phillies.
Drabek was not traded for a “Hall of Famer”, he was traded as part of a three-prospect package for one of the top starting pitchers in the game, one who was arguably exiting his prime. In fact, Halladay would pitch for just two more full seasons with the Phillies and parts of two more. 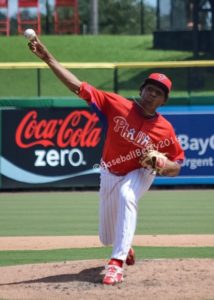 Sixto Sanchez becomes the latest top pitching prospect used as a trade chip by the Phillies. (Baseball Betsy)
Also going to Toronto in that trade were another pair of highly-considered prospects, Michael Taylor and Travis d’Arnaud. Those two were considered the Phillies #3 and #4 prospects respectively. Manuel had Taylor as his #23-ranked overall prospect, and the outfielder was in the Top 50 of both Callis and Lingo.
So the Phillies did not “get a Hall of Famer for Drabek” – they got a strong veteran pitcher for a premium prospect package, three of the club’s top four prospects at that time.
In his first season with the Toronto organization, Drabek continued his ascent up the rankings. He became the Blue Jays top prospect by 2011 following a 2010 campaign in which he went 14-9 with a 2.94 ERA and allowed just 126 hits over 162 innings. For that performance, Drabek was named the top prospect in the Double-A Eastern League.
Unfortunately, Drabek’s career from that point out would be derailed by injuries and inconsistency. He would pitch in parts of seven big-league seasons with the Blue Jays, White Sox, and Dbacks compiling just an 8-15 record. Drabek produced a 5.26 career ERA and 1.698 WHIP, allowing 188 hits over 179.2 innings across 43 games, 30 of them starts, with a horrendous 123/117 K:BB ratio.
Taylor played in parts of four big-league campaigns from 2011-14 with the A’s and White Sox. He slashed just .167/.254/.216 with one career home run in 114 plate appearances across 37 games in Major League Baseball.
The lowest-ranked prospect in the deal, d’Arnaud has had the best career. He was dealt by Toronto to the Mets in December 2012 along with Noah Syndergaard and two others in exchange for veteran pitcher R.A. Dickey and two prospects. d’Arnaud has played in parts of six injury-marred seasons, two of those as the Mets primary catcher.
In this present-day deal the Phillies have given up their top overall prospect. Sanchez was ranked as the #13 overall prospect in the game by Baseball America and the #21 overall prospect by MLB Pipeline. They also gave up a 25-year-old catcher with upside potential. The other pieces are, at least at this stage, to be considered negligible.
Maybe Sanchez will turn into Fergie Jenkins, the young pitcher dealt away to the Cubs in spring training of 1966 who turned into a Cy Young winner and Baseball Hall of Famer. Maybe he’ll turn into Carlos Carrasco, traded to the Indians in the Cliff Lee deal in summer 2009 who has gone on to win 79 games and is still going strong today. And maybe he’ll follow in Drabek’s footsteps, never reaching the lofty potential of his present talent.
The point of all of this? Phillies fans should stop sweating the surrender of Sanchez in this deal. Prospects are just that, prospects. The Phillies just used one to land the best catcher in the game today.
Nobody expects Realmuto to pull a Halladay and become a Hall of Famer. He doesn’t need to do that. He does have to give the Phillies two, and hopefully more, quality seasons behind the plate, helping the team return to the perennial contender status which they enjoyed during the days when they dealt away Drabek.
Originally published at Phillies Nation as “Kyle Drabek was another top Phillies pitching prospect dealt for an All-Star“