Halladay appears to be cruising towards baseball immortality

At some point just after 6:00PM EST on Tuesday, January 22, 2019 the world will learn the names of any individuals elected for enshrinement in the Baseball Hall of Fame.

The MLB Network will broadcast the announcement “live” with a simulcast at MLB.com also available.
Based on the latest tracking of the publicly announced Baseball Writers Association of America votes, three players appear to be shoo-ins for election.
One of those, former New York Yankees closer Mariano Rivera, has been named on 100% of the public ballots to this point.
Since no one – not Babe Ruth, Hank Aaron, Willie Mays, Ty Cobb – has ever been elected unanimously the odds against that holding up are great. But Rivera will be elected, that much is sure.
Also faring well on the public ballots is the greatest Designated Hitter in baseball history, Edgar Martinez. After falling just a bit short of the required 75% of the voters a year ago, it appears as if Martinez will get in now in this, his final year on the writers’ ballot.
The third man who appears to be easing into the Hall of Fame is someone near and dear to fans in Phillies Nation. That would be former Phillies and Toronto Blue Jays ace starting pitcher Roy Halladay.
‘Doc’ currently has been named on more than 92% (199) of the 210 ballots made public to Ryan Thibodaux’s (Twitter: @NotMrTibbs) “Tracker Team”, which has become perhaps the most respected compiler of such information.
Halladay was tragically killed in a crash while piloting his private plane over the Gulf of Mexico on November 7, 2017. Just months earlier he had been asked about the possibility of this honor. Matt Breen of Philly.com tweeted out the response of the big right-hander earlier today:
View image on Twitter 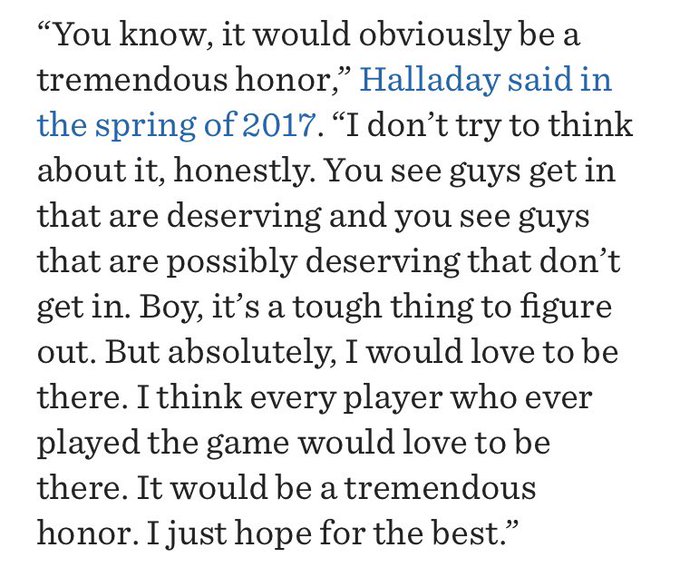 Roy Halladay will likely be announced tomorrow as a Hall of Famer. Here’s what he said about that a few months before he died. http://www.philly.com/phillies/roy-halladay-hall-fame-philadelphia-phillies-toronto-blue-jays-20190121.html …

37 people are talking about this
Twitter Ads info and privacy
Halladay came to the Phillies in a December 2009 trade from Toronto in exchange for Kyle Drabek, Travis d’Arnaud and Michael Taylor. He would pitch for the Phillies for parts of four seasons, tossing both a Perfect Game and a playoff no-hitter during his NL Cy Young Award-winning 2010 campaign.
Overall in his 16-year career in Major League Baseball with the Phillies and Blue Jays, Halladay compiled a 203-105 record with a 3.38 ERA, 1.178 WHIP, and 3.39 FIP. He pitched 2,749.1 innings over 416 games, 390 of those as a starter, and struck out 2,117 opposing batters.
Halladay also registered 67 complete games and 20 shutouts during an era where such feats were growing rare. In addition to his NL Cy Young, he also won the AL Cy Young Award with the Jays in 2003, had a season in both leagues where he finished as the runner-up for the award, and was an eight-time MLB All-Star.
Just last summer the Phillies honored Halladay by enshrining him in the franchise Wall of Fame. He thus became the first post-2008 World Series championship individual so honored. The Blue Jays retired his uniform #32 in a ceremony prior to their home opener last March.
There will be more coverage of the Baseball Hall of Fame announcement at Phillies Nation on Tuesday evening, with special emphasis on coverage of Halladay’s election results.
Originally published at Phillies Nation as “Roy Halladay on the Hall of Fame: “I would love to be there“