Altherr, Franco, Herrera (L-R) among current Phillies who could be gone in 2019

Most of the talk during this current Major League Baseball off-season where the Philadelphia Phillies has been concerned has revolved around new players coming to the team.

A new shortstop was brought in via trade in Jean Segura. A new corner outfielder signed in Andrew McCutchen. A couple of new bullpen pieces in left-hander James Pazos and right-hander Juan Nicasio.
In the deal with the Seattle Mariners that saw Segura, Pazos, and Nicasio all arrive, two holdover infielders left in Carlos Santana and J.P. Crawford. That deal made room for the return of Rhys Hoskins as the everyday first baseman.
But a number of Phillies position players remain on the roster in limbo. Moves still to be made could well determine the immediate future for each of them.
The Phillies are one of the finalists for the services of infielder Manny Machado. If he chooses to play his home games at Citizens Bank Park for most of the next decade, that could have an effect on Maikel Franco, Scott Kingery, and Cesar Hernandez.
If Machado comes and agrees to play third base, then Segura is at shortstop. Hernandez, if not traded himself, would then open spring training as the starting second baseman with Kingery as a super-utility player. If Hernandez is dealt, Kingery starts at second base.
In that scenario, Franco is clearly out. The Phillies would be aggressively shopping the 26-year-old prior to or during spring training.
Franco could survive, if Machado insists on shortstop and the Phillies slide Segura over to second base. If that happens, then it would likely be Hernandez who is shipped out before the season. The team could also decide to play Kingery every day at third base. Then we are back to Franco leaving town.
In the outfield the Phillies are one of the finalists for Bryce Harper. The likelihood is that they will see what happens first with Machado. If they land him, then they probably drop out of the Harper bidding. If the miss out on Machado, the Phillies may then become even bolder in trying to land Harper. 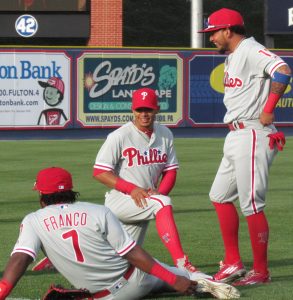 Franco and Hernandez could be joining their former Phillies infield mate Galvis in soon wearing a different uniform.
So, let’s say Machado chooses the New York Yankees or Chicago White Sox. And then let’s say the Phillies are able to outbid the Los Angeles Dodgers and other for Harper’s services. Then what happens in the outfield? Two of the three starting spots would be taken by him and McCutchen.
That would leave a glut of holdover outfielders scrambling for a final starting berth, or for the opportunity to become part of a platoon. Those players would be Odubel Herrera, Aaron Altherr, Nick Williams, and Roman Quinn.
The Phillies would probably be best served playing Harper in right and McCutchen in left, with Quinn playing center field in between them. However, Quinn’s injury history may always prove a question mark. That might make Herrera the lead option in the short term.
Such a scenario likely puts Williams and Altherr on the trade blocks, though the latter could prove to be a valuable bench player. The 25-year-old Williams has the skills to start in the big-leagues and deserves that opportunity, so he is most likely to be traded.
Of course, the Phillies might not land either Machado or Harper. That still wouldn’t mean they are done in the free agent market. There remain other options that would require spending far less “stupid” money.
They could turn their attention on the infield to a shorter term option such as Troy Tulowitzki at third base. Then we are likely back to the Franco-on-the-block situation. In the outfield, maybe someone like A.J. Pollock, and then the outfield is back to being overcrowded.
If the Phillies are able to add no one else to their starting position player mix for the 2019 season, things could still get interesting. If Hernandez says, he is likely entering his final season in a Phillies uniform, with Kingery taking over at second base by 2020 at the latest.
In the outfield, McCutchen becomes the new left fielder. You are probably then back to a Williams-Altherr platoon of sorts in right field, with Herrera and Quinn battling for center field time. Franco would remain the third baseman, unless the Phillies receive a good offer for him, making Kingery the third base starter.
One thing seems certain: the Phillies are far from done, and their current position player mix is likely to be shaken up on a couple of fronts before spring training ends, possibly before it even arrives.
Franco, Hernandez, Altherr, Williams, Quinn, Herrera. Some combination of those players is likely to be playing in another uniform during the 2019 season.
Originally published at Phillies Nation as “Phillies holdover position players waiting for futures to be decided“