If I’ve seen it once then I’ve seen it a hundred times or more as the days roll along in this current MLB off-season. When are the Philadelphia Phillies, publicly self-proclaimed as wanting to spend big and heavily-rumored as a link to most of the big names, going to actually make a move?

Well we don’t have to wonder that same thing about the defending National League East Division champion Atlanta Braves. Already loaded with young talent, the Braves struck twice today to improve their lineup.
First, Atlanta brought back long-time catcher Brian McCann as a free agent. McCann will turn 35-years-old just as he is due to report for the club’s final spring training in Kissimmee. He’ll then join them as the Braves later move to their new spring facilities in North Port, Florida.
McCann slammed 176 home runs during his first run with the Braves from 2005-13. One of baseball’s most dangerous offensive catchers during the 2000’s, he was an NL All-Star for six straight and seven overall seasons and won five Silver Slugger Awards, including four in a row at one point.
In December 2013, McCann signed as a free agent with the New York Yankees. In 2015 he won the AL Silver Slugger Award at catcher.
The Yankees dealt him to Houston in December 2016 for a pair of prospects, and McCann helped the Astros win the first World Series championship in franchise history in 2017. He caught every inning of that Fall Classic as Houston won in seven games over the Los Angeles Dodgers.
It is expected that the lefty-swinging McCann will form a LH-RH catching platoon in 2019, teaming with the righty-hitting Tyler Flowers. McCann missed two full months in the middle of this past season after undergoing knee surgery but is said to be 100% ready to go for the 2019 campaign.
Later in the day, the Braves struck again to shore up another weak spot in their lineup. This time Atlanta announced the signing of third baseman Josh Donaldson.
Donaldson will turn 33-years-old in December. He was the American League Most Valuable Player in 2015 as a third baseman with the Toronto Blue Jays after starting his career with the Oakland A’s as a catcher. In addition, he finished among the top 4 in AL MVP voting twice, was an AL All-Star for three straight years, and won a pair of Silver Slugger Awards. 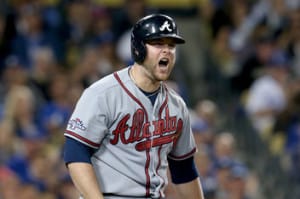 McCann returns to Atlanta, where he was one of the top catchers of the 2000’s.
The Blue Jays dealt Donaldson away to the Cleveland Indians this past August 31, enabling him to be placed on the Tribe’s postseason roster. He would go just 1-11 as the Indians were swept out of the ALDS by Houston.
Like McCann, Donaldson’s 2018 season was injury-marred. He missed three-and-a-half months due to an injured left calf muscle. He appeared to be healthy once activated by Cleveland in mid-September, slashing .280/.400/.520 with three homers and seven RBI over 60 plate appearances in 16 games.
Both McCann and Donaldson are aging veterans who are injury risks playing past their prime. However, the Braves got each on just a one-year contract, so there is no long-term commitment involved.
If either or both play healthy and closer to their career norms it will add just that much more firepower to an already solid Atlanta lineup that includes first baseman Freddie Freeman, three-time Gold Glove center fielder Ender Inciarte, and 2018 NL Rookie of the Year Ronald Acuna.
The Phillies and the rest of the National League East Division are on notice. The defending division champions have every intention of not only repeating, but they intend to improve on their 92 victories registered in the 2018 season.
Originally published at Phillies Nation as “Braves start applying off-season pressure to Phillies and rest of the NL East“