As MLB free agency looms, Harper will make all the bubble gum he could ever blow

With last night’s Game One 8-4 victory by the host Boston Red Sox over the Los Angeles Dodgers, the 2018 World Series is officially underway.

In addition to the inherent drama of the Fall Classic, late October baseball also means something else. Something far more important to fans of the Philadelphia Phillies.
With each day that passes, we draw closer to the start of free agency in Major League Baseball. In fact, it is possible that the free agency signing period could begin as soon as this coming weekend.
Players whose contracts are expiring will become free agents and are free to both negotiate and sign with any team beginning at 9:00AM on the morning following the final game of the World Series.
Should the Red Sox sweep, that off-season signing period would begin this coming Sunday morning. Should the World Series extend all the way out through seven full games, that dramatic Game 7 would take place on Halloween. This would mean that the free agency signing period will begin no later than November 1.
So we are within a week, give or take a few days, of the Phillies and each of the other 29 MLB ball clubs being able to sign free agents.

The Phillies, valued at $1.7 billion by Forbes magazine back in April of this year, appear to have tremendous financial resources at their disposal. Controlling owner John Middleton is already on record that he is ready and willing to use those resources in order to return the team to contending status.
Back in mid-July, former ESPN writer and longtime Baseball America contributor Jerry Crasnick reported that sources were telling him that Middleton was ready to go after the two biggest current free agent names, shortstop Manny Machado and outfielder Bryce Harper, this fall.
Twitter Ads info and privacy
Per Cot’s Contracts at Baseball Prospectus, the Phillies have approximately $69 million in contract obligations already on the books for the 2019 season. The vast majority of that is committed to Jake Arrieta ($25) and Carlos Santana($20.3), with veteran relievers Pat Neshek and Tommy Hunter combining for nearly $17 million more.
The final two contractual commitments are to Odubel Herrera ($5.35) and Scott Kingery ($1.75), a pair of younger players who the Phillies have tied up with long-term, club-friendly deals.
When the Phillies opened their wallets to sign Arrieta back in spring training, Middleton made it clear that the Phillies were ready to do what it takes to compete. He was quoted as follows at that time by Bob Brookover at Philly.com:

“I think it’s a message frankly to everybody. It’s not just the free agents. I want everybody in our organization to understand what our mission is and how we’re supposed to go about doing it. I want the coaching staff, I want the front office, I want the fans, I want other players, I want even other baseball organizations to know that we’re serious about winning and we’re going to do what it takes to win.”

Major League Baseball has a current CBA (collective bargaining agreement) in place with the MLBPA (the player’s union) which calls for an annual “luxury tax”, or what is formally called the Competitive Balance Tax.
While not a hard and fast salary cap, teams are taxed on each dollar they spend above a certain level of total player salaries. That level rises each year of the current CBA, which runs through the 2021 season. The level for the 2019 season has been set at $206 million.
Aaron Nola, Maikel Franco, Vince Velasquez, Adam Morgan, and Hector Neris made a combined $18.75 million this past season. All of those players will be getting raises for the coming season. You would have to believe that the Phillies would love to reach a long-term agreement with Nola.

What this means is that the Phillies have $137 million in annual dollars to spend before they would reach the CBT for next season. Obviously, all of that cannot be spent on free agents. The club has to fill out a roster beyond just the half-dozen players already under contract.

We haven’t even mentioned younger players yet, such as Rhys Hoskins, Nick Williams, Roman Quinn, Jorge Alfaro, and most of the pitching staff. These players will receive at least the MLB minimum salary of $555,000.
I am assuming that Cesar Hernandez, who cost $8.5 million in 2018 and could end up being awarded more than $10 million in arbitration, will be gone. Over this winter the Phillies should either trade him away or outright release him. But neither is a certainty.
There have been many fans hoping that the club will deal away Santana. Frankly, it would be ideal for the Phillies to trade him to any team willing to take on the more than $50 million still owed over the next two years.
Reality says that will be impossible. The team is stuck with that albatross of a horrid free agent deal agreed to by Matt Klentak last December. The Santana debacle also calls into question Klentak’s ability to make the right decisions in free agency. This off-season will be Klentak’s Waterloo, at least to most of the fan base.
If you project what it will cost to put together a full roster for the 2019 season, and assuming that the Phillies keep most of their current roster intact, the actual salary commitments rise to $130 million or more.

It would appear that the Phillies could theoretically spend as much as $60-70 million on “upgrade” annual salaries. That would be new, premium players acquired via free agency or trades.

Early speculation has Harper and Machado each landing a 10-year, $350 million contract, give or take a couple years and a few dozen million. Should the Phillies actually sign both, they are pretty much tapped out in the short-term. 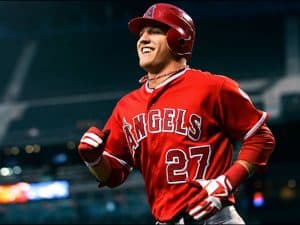 Local product Trout is due to become a free agent following the 2020 season.
Even more than Harper or Machado, Phillies fans are waiting on the potential availability of local product Mike Trout. The Millville, New Jersey product is set to become a free agent two years from now. He will be 29-years-old by that time.
Assuming that Trout remains healthy and continues performing as he has for the last eight seasons, as the best all-around player in the game, then he won’t come cheap.
Right now, Trout is making $34 million per season. Expect that he will be seeking a $40 million annual salary that will take him through most of his 30’s.
Can the Phillies afford to pay $110 million per year to just three players? Even though the contracts of both Arrieta and Santana will be over before the time a Trout deal would kick in, you have to factor in substantial contracts by then to keep homegrown stars Nola and Hoskins – at a minimum.

As the Phillies shop for a legitimate, in-their-prime offensive producer or two this off-season, and maybe even another proven starting pitcher such as Patrick Corbin, it also appears time to open talks with reps for both Nola and Hoskins.
If the Phillies can secure long-term deals that are even reasonably team-friendly on those two popular, homegrown studs, it would make plotting a future move on Trout much easier.
Of course, Trout may indeed never become available. His current team, the Angels, are believed to already be opening negotiations with him on a possible career-long contract extension. This is one reason why you cannot hold back now in hopes of landing this potentially bigger fish.
It is future decisions such as a potential Trout deal, as well as the Nola, Hoskins, and other internal long-term contracts, that Middleton and Klentak will be considering when making their financial decisions on Harper, Machado, and other outside free agents and trade targets both this off-season and next.
Originally published at Phillies Nation as “Reality of the Philadelphia Phillies financial situation entering the 2018-19 free agency period“