The Phillies brain trust has been making the rounds over the last few days trying to defend the 2018 rise and collapse, and handle media and fan questions regarding their plans to better the team for the 2019 season.
On Tuesday it was Andy MacPhail’s turn in front of the cameras and microphones. One comment made by the team president is really sticking in my craw and is likely doing the same with most Phillies fans who picked up on the it.
Tim Kelly here at Phillies Nation highlighted that comment in his own piece on MacPhail’s presser just yesterday:

“This isn’t the last year that major league baseball is ever going to be played. So you’re not going to throw every resource you have at this year because there’s the following year as well.”

For me, that attitude is problematic. First, if this season demonstrated anything it was that the Phillies are now walking a very fine line. They finished just below the .500 mark at 80-82 and were exactly middle of the pack in the National League East Division in third place.
Over the season’s first four months they were a tease, somehow finding a way to overcome glaring shortcomings in the most fundamental aspects of the game to actually contend. Over the final two months, those glaring shortcomings finally caught up to them, and the predictable collapse occurred.
But was it inevitable, or was the team simply unwilling to pay the price it would take to inject some real life, and real talent, into a lineup that was desperate for both? And is that unwillingness a sign that the current management team is incapable of pulling the trigger and actually going for it?
Manny Machado was there for the taking at the trade deadline when the Phillies were still contending as far as the standings were concerned. And yet in a piece for Phillies Nation back in mid-July, I quoted Jon Heyman at Fancred Sports who commented that Phillies management was suffering from “too much timidity” in their pursuit of the superstar.
The Baltimore Orioles ended up dealing him to the Los Angeles Dodgers for a package led by outfield prospect Yusniel Diaz. Frankly, the other four prospects are likely to prove insignificant over the long run. None was ranked highly within the Dodgers minor league system.
Diaz is not going to be a superstar. He will likely be a big-leaguer, and probably a starting outfielder. The Orioles at least got something of long-term value for a superstar who they were going to inevitably lose. But could they have gotten a bit more?
The Phillies were not going to, nor should they have, traded either Sixto Sanchez or Scott Kingery in what was potentially a rental-only Machado trade. However, would a package led by J.P. Crawford and Adonis Medina have gotten it done? Would the Orioles have taken those two at the front along with a couple of lesser prospects over Diaz? How about Crawford and Zach Eflin or Nick Pivetta?
We’re probably never going to know just how hard the Phillies actually pushed in the Machado talks with Baltimore. But we do know that they didn’t get it done, that the offensive attack continued to sputter, that the shortstop position continued to be manned by a rookie seeing his first-ever significant professional time at the position, and that the team collapsed.
A month from now the World Series will have ended, and Major League Baseball’s “Hot Stove” season will begin. Dozens of players of varying levels of value will become available on the free agent market. The Phillies have the resources to bring in significant talent for the 2019 campaign.
It should be obvious to the Phillies brain trust of MacPhail, controlling owner John Middleton, and general manager Matt Klentak that the Atlanta Braves have passed them in present talent. Also, both the Washington Nationals and New York Mets within the division are right now in at least as good a position, possibly better. 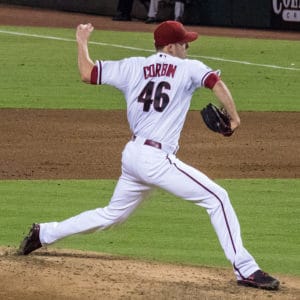 Lefty Corbin should be the type of arm that the Phillies are trying to land for their rotation. (Photo: Bob James)
For the Phillies to fix what is wrong with their everyday lineup and compete over the next decade they are going to need to convince multiple talented free agents in their prime years to come to play their home games at Citizens Bank Park.
This off-season, a trio of perfect free agents happen to be available. Those would be the 26-year-old Machado, soon-to-be 26-year-old outfielder Bryce Harper, and 29-year-old southpaw starting pitcher Patrick Corbin.
The Phillies could take the field for the next half-decade or more with an infield featuring Rhys Hoskins, Kingery, Machado, and Maikel Franco. They would have Harper and his prodigious power in right field and in the middle of their batting order.
On the mound they would have the left-handed Corbin pitching between righties Aaron Nola and Jake Arrieta at least for the 2019 season, and beyond depending on how they handle Arrieta’s contract option.
As MacPhail says, yes, there is “the following year as well.” Among the players scheduled to become free agents following the 2020 season who will be under-30 at that point are shortstop Xander Bogaerts, pitcher Gerrit Cole, outfielders Nick Castellanos and Marcell Ozuna, and the crown jewel of the class, third baseman Nolan Arenado.
And the year after that, well, that’s the one every Phillies fan has been waiting for, when outfielder Mike Trout will finally become available at age 29.
If you’re worried about the Phillies having to pay their own young core players, don’t worry too much. Kingery signed a six-year deal back in spring training this year. That deal takes him through the 2023 season, with three addition option years, all at an affordable price.
The Phillies are going to have to pay Hoskins and Nola big money at some point to keep them around. But that point doesn’t come for some time. Hoskins has two more seasons to play before he is even arbitration eligible, and cannot become a free agent until he reaches age 31 in five more years.
Nola is the more pressing deal. He is arbitration-eligible this off-season and in line for at least a hefty raise on a one-year contract. He becomes a free agent at age 29 after four more seasons.
The reality is that the Phillies are not likely to win out in the bidding for both Machado and Harper. But they should absolutely be trying their hardest to land both of these young superstars.
If they happen to win out on both, great. The future gets built around those two and the homegrown guys, and maybe the team tries to figure out a way to also fit in Trout in a couple of years. 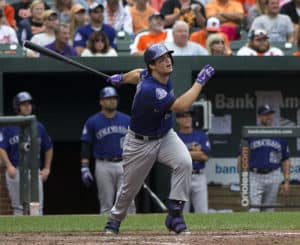 It might seem nice to wait for Arenado, but who says he’ll still be available next year? (Photo: Keith Allison)
If they fall short and only land one, they can perhaps go after Arenado or Bogaerts next year. But they need to try right now.
The Phillies cannot allow this upcoming off-season to slip by and not significantly improve the roster with impact players who will excite the fan base.
There is no guarantee that the best 2020 free agents won’t sign extensions before the Phillies ever get a shot at them.
Last winter, Klentak largely failed with the Carlos Santana contract. He gave $60 million guaranteed dollars to a player who would be performing in his ages 32-34 seasons when he already had a young, star-caliber player in Hoskins at the first base position.
For seven years from 2011-17 when he was actually in his prime with Cleveland, Santana averaged 24 homers, 80 RBI, and 78 RBI with a .249/.363/.445 cumulative slash line.
This year with the Phillies, Santana had 24 homers, 86 RBI, 82 runs scored, and a .229/.352/.414 slash line. As he ages over the next two years, fans and management should expect those numbers to only regress.
The Phillies cannot make the mistake again of giving big money to a limited offensive player who is past his prime. Both Machado and Harper are superstar-caliber, not limited players, both in their primes where they will be for years to come.
In his own piece on the issue just yesterday, Jim Salisbury of NBC Sports Philadelphia opined that it could take an eight-year, $300 million dollar deal to land each of Harper and Machado.
That would be $75 million for each of the next eight years for the two, taking them roughly through their age 34 seasons. That is totally appropriate, the Phillies have the money, and considering the other commitments both now and for the next handful of seasons it is doable while paying everyone else.
Salisbury quoted MacPhail on the financial angle:

“There has been some speculation about what we’re going to do which I find to be just someone just didn’t put a paper and pencil together and do the math.” 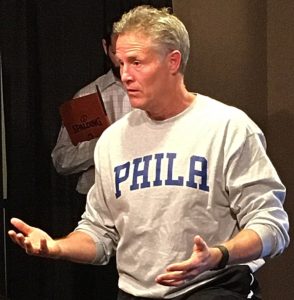 The Phillies brain trust needs to do more than go “star chasing”, as Sixers Brett Brown put it. (Photo: TastyPoutine)
Well, I’ve put a paper and pencil together, and the math is absolutely doable. But is this group capable of selling themselves, their vision, and the Phillies future to players like Machado and Harper? I am not quite sure that is doable.
I didn’t expect MacPhail to come out and make the Brett Brown mistake, saying that the Phillies would be going “star-hunting” this coming off-season.
But I also didn’t need someone hedging their bets and trying to diffuse fan disappointment should he and the brain trust fail to make the needed significant upgrades.
MacPhail was wrong. You do have to throw every resource you have at this year. There is an old saying, throw enough “stuff” (not the word) at the wall, and some of it will stick.
If the Phillies throw every resource they have at their current problems, some of those resources will yield talent for years to come. Many of the problems will get answered. Perhaps enough to make a difference and push the club to contending status next season and beyond.
Stop making excuses before the fact. Go out and do your job and bring a winning team to a city and fan base that did not deserve what happened over the last half-dozen years. You have plenty of resources at your disposal, but do you have the ability to fix the problems? We’ll soon find out.
Originally published at Phillies Nation as “Andy MacPhail is wrong – Phillies do need to “throw every resource at this year“