Kapler’s Phillies host the Nationals and Cubs in pivotal homestand

This has easily been the most interesting summer of baseball in Philadelphia in the last five years.

Not since a too-little, too-late charge at the second NL Wildcard slot in September of 2012 have the Phillies provided fans with this level of sustained excitement.
On Friday, July 6 the Phillies crushed the host Pittsburgh Pirates by a 17-6 score at PNC Park to move into first place in the National League East Division. The club would remain perched atop the division standings for nearly six weeks.
Even after Sunday’s 8-3 win in Toronto, the Phillies have lost 11 of their last 17 games. The Braves have won nine of their last 16 in the same time frame. The result has been that Atlanta has slipped past them and built up a three-game lead in the division.
The Phillies are clearly reeling. All season long the club failed to score runs on a consistent basis and played unacceptable defense. But the starting pitching was mostly excellent, the bullpen got hot in July, and new manager Gabe Kapler kept the mostly young ball club believing in itself, enough to overcome their frequent mistakes.
That is no longer the case. Since sweeping a four-game set at home against the Miami Marlins at the start of August the Phillies have not managed to win any of their last half-dozen series.
The club now returns home to Citizens Bank Park for a pair of three-game match-ups. First will be the always tough Washington Nationals beginning with tonight’s 7:05PM series opener.
Zach Eflin, generally struggling since early July, will take the mound. The Phillies really need him to step up, but also need the offense to support him in order to get the week off on the right footing.
It would also be important to get the week started strong since Aaron Nola will take the mound for the Phillies in the second game on Tuesday night. Nola is having a Cy Young-caliber season, and will give the club an excellent chance at picking up a victory.
Following Wednesday’s series finale with Jake Arrieta on the mound the Phillies are scheduled to enjoy an off-day on Thursday. Next weekend it will be the team currently holding the best record in the National League invading South Philly as the Chicago Cubs come to town. 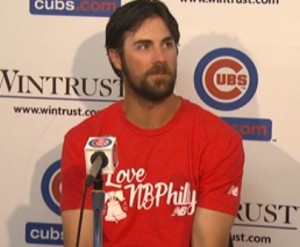 Hamels is scheduled to take the mound for the Cubs next Sunday
If the rotation and weather hold up the Phillies would be scheduled to send Nick Pivetta, Vince Velasquez, and Eflin out against the Cubbies. Should the Chicago rotation hold up, their start on Sunday, September 2 would go to old friend Cole Hamels.
Since a deal just prior to the non-waiver trade deadline sent the now 34-year-old lefty from the Texas Rangers to Chicago, Hamels has been phenomenal. Over five starts he has a 4-0 record, allowing just 24 hits over 34 innings with a 30/8 K:BB ratio.
It would not be at all surprising to see Kapler make the decision to bump Eflin back a day, starting Nola on his normal four days of rest against Hamels and the Cubs.
The further schedule reveals that the Phillies have a long nine-game home stand beginning on September 10. If they can fight to remain in the race, those would make for some seriously fun days and nights down at the ball park. And then you have seven of the final 11 games of the season with the Braves.
Jim Salisbury of NBC Sports Philadelphia quoted Phillies star Rhys Hoskins following yesterday’s important victory:

“I don’t think our feeling has changed. September baseball is what we’re looking at right now. We know we play the division a lot and if we play — I think Jake Arrieta said it a couple nights ago — if we play better baseball, if we play good baseball, we’re going to be right where we want to be come the last 10 days of the season.”

If the Phillies are to turn their season back around, now is the time to start playing that good baseball. Atlanta is already trying to separate themselves in the divisional race. The Phillies are battling three or four others for one of two Wildcard spots.
If they can’t win this week, by the time Labor Day rolls around a week from now their 2018 season could be on life support, and that potential September excitement virtually gone.