Numerous reliable sources were reporting late this afternoon that the Washington Nationals had finally struck at baseball’s Winter Meetings. The deal has since been confirmed by the two teams.
All the previous rumors here had the Nats going after a starting pitcher. It turns out that they instead have apparently dealt away the future of their rotation for a hitter.
The Nationals have obtained outfielder Adam Eaton from the Chicago White Sox. In exchange, Washington is sending three of their top prospects to the Chisox.
Heading to the South Side of Chicago are Lucas Giolito, Reynaldo Lopez, and Dane Dunning. Giolito is listed by most prospect evaluation resources as the Nationals top prospect.
“An important part of the process we are pursuing is acquiring quality pitching talent. We feel like we’ve done that today—and yesterday—en masse,” White Sox general manager Rick Hahn said in a statement per Baseball America’s Kyle Glaser. “Giolito and Lopez rank among the top prospects in baseball, while Dunning is another young prospect who possesses front-of-the-rotation potential.”

WHO IS ADAM EATON?

Let’s get this out of the way with: Eaton is not the former pitcher who had a 10-year big league career over the entirety of the last decade. There is no relation between the two same-named players.
This Adam Eaton was selected by the Arizona Diamondbacks in the 2010 MLB Amateur Draft out of Miami University (Ohio) in the 19th round.
The White Sox obtained Eaton in a December 2013 three-team trade with the Dbacks and Los Angeles Angels. In that deal, Mark Trumbo and A.J. Schugel went to Arizona, with Hector Santiago and Tyler Skaggs going to the Halos.
Eaton was inserted into the Chisox starting lineup almost immediately. Over his three seasons in Chicago, Eaton has become one of baseball’s most anonymous stars.
In those seasons, Eaton has hit .290 with a .362 on-base percentage. He has scored 265 runs, rapped out 83 doubles, and homered 14 times in each of the last two seasons. He has also stolen 47 bases, and led the AL in triples in both 2014 and 2016.
Eaton is also one of the best defensive outfielders in baseball. He was a Gold Glove Award finalist this year for his play in right field after previously being a finalist in 2014 for his work in center field. 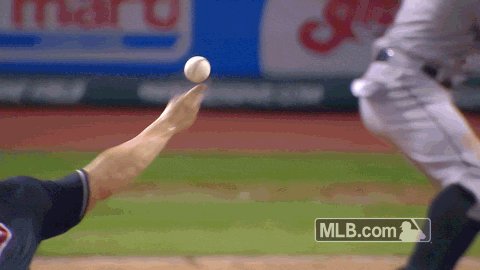 The @Nationals (reportedly) get a CF who can hit a homer while BLOWING BUBBLES: http://atmlb.com/2hl7cUo  #WinterMeetings

The arms headed to Chicago in this deal rank as the #1, 3 and 6 prospects of the Nationals by MLB Pipeline, with Giolito ranking as the #3 prospect overall in the entire game.
Giolito is a 22-year old right-hander who was the Nationals first round pick at 16th overall in the 2012 MLB Amateur Draft out of a Los Angeles high school.
Over five minor league seasons, Giolito has gone 25-15 with a 2.73 ERA and 1.192 WHIP. He has allowed 317 hits over 369 innings with a 397/123 K:BB ratio.
Giolito received his first shot at the big leagues this past summer as well. Over six games, four of them starts, he allowed 26 hits over 21.1 innings, striking out 11 and walking 10 batters.
Lopez turns 23 years old in January, and signed with the Nats as an international free agent out of his native Dominican Republic back in 2012. He also debuted this year, allowing 47 hits over 44 innings in 11 games, six of those starts.
Dunning turns 22 years old in two weeks, and was the Nationals first round pick this past summer at 29th overall in the MLB Amateur Draft out of the University of Florida.
This seems like a heavy price to pay by the Nationals. They certainly shored up their center field position, adding another dynamic player to their lineup. Eaton has 15.3 WAR value over the last three seasons.
However, the Nats also gave up a huge piece of their future pitching puzzle. True, their best short term window may close after two more years. But you would think that the club hopes to not go completely into the tank before winning again after that.
Also, the club has other needs. They still could use a proven closer, and also perhaps another starting pitcher. Apparently not every Nationals player is happy with the deal.

On other hand, one #Nationals player sent me this text: “WTF?!?!” Team still needs closer. Likely out on big two. Melancon, Davis off board.