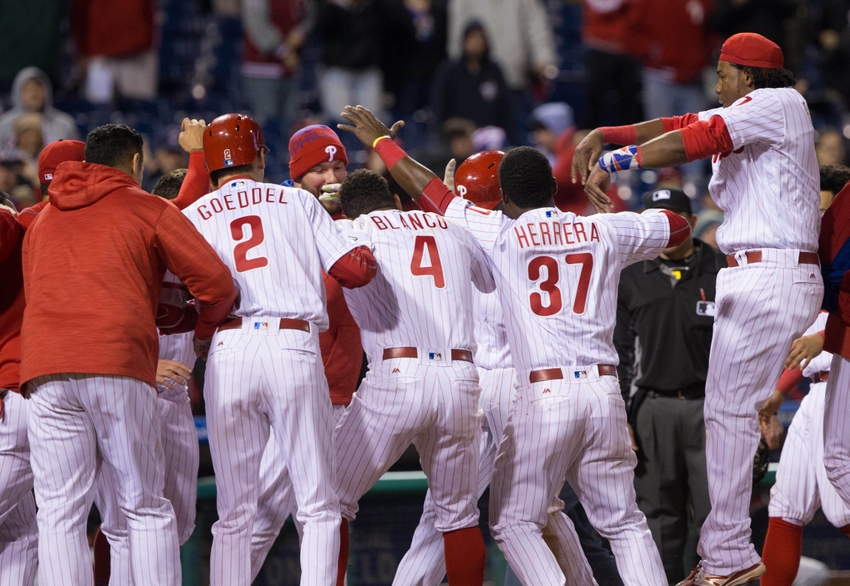 Every month during the season, I release a current Power Ranking of the Top 10 teams in Major League Baseball.
Beginning with the June 1st rankings, a statistical evaluation of each team’s pitching, offensive, and defensive performances will provide the bulk of the placement, along with each team’s overall win-loss performance factoring in recent results.
But for this first month it’s more about “feel” – how do the teams look after the first month of play. Statistics take time to play out. It takes a while for trends to develop into seasonal performances that truly reflect anything of lasting merit.
But four weeks of play is enough to get a sense of direction, and at least an early sense of which clubs look ready to contend.
I still don’t believe that the Phillies are a 2016 contending team. The pitching is fine, and getting better by the week. But the consistent offensive production needed to stay afloat over the course of a 162-game schedule is still lacking.
After Maikel Franco, Odubel Herrera, and the occasional heroics of a Ryan Howard (as we saw last night), there is no “there” there in the everyday lineup.
So by basically looking at how the teams from around MLB have actually been producing in the win-loss column during this first month of April 2016 that will be ending tonight, as well as by factoring in what I “feel” about each team’s performances, let’s move on through the first Power Ranking of the season.
You might not like where your favorite club falls in our rankings at any point. That’s fine, we’re all entitled to our biases and our opinions.
However, if you really want to blame someone for where your team is ranked, well, you might have to blame them for their actual performances. Play better, win more, you’ll get ranked higher.
Come back on June 1st for our next Power Ranking, which will include much more of a statistical analysis. But for now, click through at the bottom of each page for this nice slide show representing the first month of play in Major League Baseball.
NEXT: TBOH MLB POWER RANKING: #10