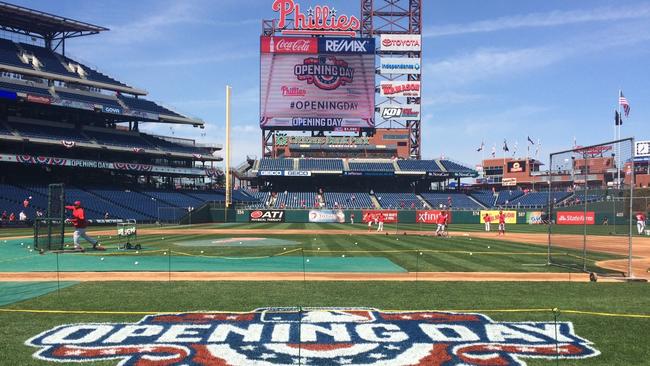 It’s Opening Day in Major League Baseball and for the hometown Philadelphia Phillies.
Finally, mercifully. A long, cold winter is in the rear view mirror. Spring has sprung, and not just on the calendar.
Temperatures are starting to warm up, days are getting longer, the air actually feels different.
It was a trying off-season for the Fightin’ Phils organization. GM Ruben Amaro and club president Pat Gillick started with public pronouncements that the team was going into a complete rebuild mode. All high-salaried, aging veterans were aggressively shopped.
In the end, just three key players were dealt: the greatest shortstop in franchise history, Jimmy Rollins went to the Dodgers. Outfielder Marlon Byrd went to the Reds. Lefty reliever Antonio Bastardo went to the Pirates.
Though talked about frequently, and in some cases rumored heavily to be leaving, the roster for Opening Day will include controversial closer Jonathan Papelbon and the Phillies version of a “Core Four”: Cole Hamels, Chase Utley, Ryan Howard, and Carlos Ruiz.
Not much new was added that should prove to be exciting for Phils fans to watch, unless you are buying the hype surrounding Rule 5 pickup Odubel Herrera.
For me, the jury is still out on the new centerfielder. But if nothing else, the speedy Herrera has injected life into what could have been an even more moribund spring.
Time to peer into my own personal crystal ball, and make some predictions for the upcoming 2015 Philadelphia Phillies season.
These are my expectations for the team, some of the individual players, and some of the situations surrounding the franchise as the 2015 campaign opens.
Let’s start with the win-loss record and the standings. I have thought for some time that this is a 70-92, last place ball club. I am historically a “glass half-full” guy.
Those two things said, I can easily see the team winning up to 10 fewer games, especially if 2-3 of the above core are actually traded away.
Now to those trade situations.
The Hamels situation will remain the most interesting and most widely, and wildly, speculated the longer the season drags on without such a deal. If he stays healthy and effective, and the team falters, the rumors will only get louder.
I see a Hamels trade as a 50-50 proposition. There is actually no need whatsoever for the Phils to be rushed into a deal for the lefty ace.
If some team is willing to meet their price, he goes. If none is, he stays. That is how it should be. He can be dealt early, as the trade deadline approaches, next off-season.

The trade that I see happening soon is a Papelbon deal. The Blue Jays scouted him right at the end of spring.
The keys here will be two-fold: Paps staying healthy and effective, and some team with dreams of contending suffering bullpen collapses. Both are good bets.
Howard and Ruiz could also go at some point, but only if the Phillies are actually going to give them away and eat a major portion of each player’s salary. I think we’ll see them remain right up until the deadline.
Because of his own statements and contract situation, I see Chase Utley as the lone career Phillies player among this group.
He is still beloved by the fan base as “The Man“, still creating a noticeable buzz in the home crowds each time the opening chords of “Kashmir” by Led Zeppelin blare from the Citizens Bank Park speakers as his walk-up tune.
For individual player results, the key performers will be the trio of Herrera, Ben Revere, and Cody Asche.
That doesn’t sound very promising, but when you actually break this team down, those are the facts. If these players produce, the team can over-achieve. If they don’t, the expected failures happen.
I’m not a believer in either Revere or Asche as big contributors. Revere is limited to punchless singles and walks, and swiping bags, as his offensive arsenal.
That wouldn’t be bad at all, if he only had some pop in his bat too. Any pop. Doubles or gap power. But he doesn’t. I see Revere as a .290 hitter with a low on-base percentage, and about 40 steals offensively. Few extra-base hits, marginal defense. Overall, a “second division” regular.
Asche is similar for me. A better defender at 3rd than Revere is in the outfield, he still doesn’t offer the pop that a contending team would expect from a corner infielder.
I see Asche, over a full 600 appearance season, as a 15-home and 65-rbi player. The Phillies have made do with lesser bats at the hot corner for over a decade, since dumping Scott Rolen. That continues for now.

Frankly, it’s hard to know what to expect from a player such as Herrera.
He was exciting in the Grapefruit League. In fact, he was THE most exciting player for the Phillies this spring down in Florida.
But how will he hold up over his first shot as an MLB regular? How will he adjust when big league pitchers, coaches, and scouts begin to dissect him and figure out his weaknesses better? Can he adjust, and become a Werth/Victorino-type Rule 5 find for the team?
I’m going to give Herrera a bit of a benefit of the doubt, if only because I hope he does become that level of player, something to actually bring excitement to the ballpark on a regular basis over the summer. Let’s call him a .285 hitter with a bit more pop than Revere, and another 40 stolen base man.
Juan Samuel in both 1984 and ’85 is the only Phillies player to swipe 50 or more bags in a season in more than a century. Revere came close, swiping 49 bases a year ago. If he and Herrera can race one another towards that mark, it might create enough chaos for the opposition to help lift the team beyond expectations.
Putting numbers on the rest of the team’s hitters would prove to be an exercise in utter futility.
The key for Utley is keeping him as healthy and productive as possible across a full 6-month season. To that end, Ryne Sandberg has to get him more regular rest. If he plays in 125 games, a healthy and productive season at age 36 would translate to something like a .280 average with 15 homers and 70 rbi.
If Howard stays the entire year and is the cleanup hitter, and if he is indeed back to full health, then he can be a 30-100 guy again.
That still wouldn’t come with much of a batting average. But the power would be enough, if Utley meets his expectations and the Revere-Herrera combo produces, to make half of the offense reasonably productive.
The rest of the team, players like Ruiz, Cameron Rupp, Grady Sizemore, Jeff Francoeur, and Freddy Galvis are either glove-first guys or too limited overall to provide any consistent offensive production. They would all be bench players, at best, on an actual playoff-contending roster.
On the mound, Hamels has the talent to win a Cy Young Award. He is a perennial 200-innings, 200-strikeouts, low ERA/WHIP starting pitcher.
If he stays healthy, pitches normally, and gets just a little bit of a break from his offense on the days he pitches, he could win 20 games for the first time in his career. If he is traded to a contender, the odds on that increase dramatically.
The rest of the starting rotation offers nothing to excite. About the best we can hope for is that young David Buchanan is for real.
In his case, for real would mean showing that he can indeed be a regular member of a starting rotation on a competitive ball club. He had a good spring to follow a promising rookie campaign in 2014. I’m hoping for a double-digit win campaign, with an ERA in the 3’s. I’ve got “High Hopes.“
Pitchers like Aaron Harang, Jerome Williams, and the recently signed Dustin McGowan are merely placeholders until the young pitchers in AA can more fully develop.
I wouldn’t expect more than 8-10 wins, 150 innings, with a 4.00 or higher ERA from any of them. If the Phils got such numbers from all three of those arms, they would be ecstatic.
The pen is the thing. If Paps is indeed dealt, and the other bullpen arms stay healthy, the trio of Ken Giles, Jake Diekman, and Justin De Fratus would be counted on heavily to produce at the end of games.
Like many others, I liked what I saw in 2014, and have to believe this bullpen triumvirate is for real. Giles could save 30 games if given a mostly full chance, with Kimbrel-like peripherals.
As far as club management goes, I truly hope that Ryne Sandberg doesn’t pay with his job for the likely failures of the team on the field. He was dealt a lousy hand on being hired, and something tells me that there is a winner in there, if the team can just hold on to him until it improves the talent at his disposal.
Perhaps the most positive, wonderful thing for the future of this team that could happen would be some type of sale or power structure change that sees John Middleton take over as the majority owner.
If that happens, and he bounces Gillick and Amaro, bringing in a young, bright, outside innovator, nothing would be more important.
The Phillies story in 2015 as I turn away from my own crystal ball is one of on-field frustrations overall, broken by moments of excellence from Hamels and a few others.
Meanwhile, the trade rumors and speculation of the spring continue to grow, until 2-3 deals finally take place. Here’s to hoping that those deals yield some help for the future.