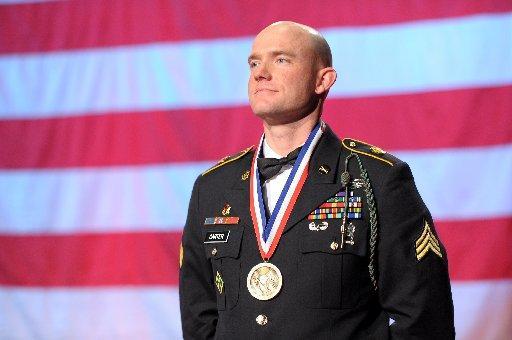 There are 80 of them as of today, the living recipients of the Congressional Medal of Honor, the highest award that a member of the American military can receive. 11 earned their medals in World War II, and 11 more in the Korean War, while 53, by far the highest number, earned their honors in Vietnam.

Carter is one of the 5 younger generation of recipients who have earned their honors in the War in Afghanistan. And he is the most recent as well, having received his CMO three weeks ago for actions that he took almost four years ago now in the United States Army.

Ty Carter was born in the beautiful and peaceful Pacific Northwest region of our country, in Spokane, Washington on January 25th, 1980. His family moved to the Bay area of California a year later, but then went back to Spokane in 1991. Ty graduated from high school there in 1998, and in October of that year he enlisted in the U.S. Marine Corps.

In his Marine service, Ty Carter trained at the Marine Corps Combat Engineer School, served a stint in Okinawa, Japan as an intel clerk, and then in 1999 was sent to Primary Marksmanship Instructor School after showing promise in previous weapons’ marksmanship training. The skill would turn out to be invaluable during his later heroic action.

After serving training deployments in California and then in Egypt, he was finally honorably discharged from the Marines in 2002. He then began a modern day struggle in his personal life. He met a girl while attending Community College classes. They married and had a daughter, but the marriage would not last.

In 2008, Carter decided to get back into the military, enlisting in the U.S. Army as a cavalry scout. From May 2009 through May 2010, he was deployed to serve in the War in Afghanistan with Bravo Troop, 3rd Squadron, 61st Cavalry Regiment, 4th Brigade Combat Team, 4th Infantry Division.

During this first deployment in Afghanistan, Carter settled in at Combat Outpost Keating in the Kamdesh District of Nuristan Province in the northeast region of the country not far from the border with Pakistan.

On the early morning hours of October 3rd, 2009, COP Keating came under serious, direct attack from some 300 enemy fighters who had surrounded the camp on the high ground at all four sides. The attackers awakened Carter’s camp with a variety of weapons fire ranging from small handguns to RPG’s, machine guns to mortars.

Carter jumped right into action, carrying ammo from his barracks to another battle position under intense enemy fire, then back again across the same open 100 meters of ground where he retrieved machine gun oil and more ammo. He then made the run under fire a third time to get even more ammo.

Injured within those first moments of the battle, Carter continued to fight on, using his marksmanship skills to drive back enemy that had by that point infiltrated the camp perimeter. He crawled to retrieve more ammo, again under continuing intense enemy fire, and reinforced the camp’s main battle position for a 4th time.

Carter then ran across 30 meters of open ground to a wounded comrade, providing life-extending first aid, and then carried the soldier back across that same ground, all while continually being exposed to enemy fire. He then made a run for the camp’s Tactical Operations Center in order to obtain medical care for that wounded soldier, and also to coordinate recon. During that run he saw the body of a fallen Sergeant, and was able to retrieve that soldier’s radio, enabling the camp to coordinate their evacuation with fellow soldiers.

The battle raged all day and into the night, when reinforcements were able to safely land by helicopter. Almost 2/3 of the coalition soldiers at the camp were casualties, with 8 killed and more than 25 wounded, including Carter. The later examination and investigation of the incident revealed that Carter had exhibited heroic actions and exceptional skill that were critical to the defense of their camp, prevented the enemy from capturing their position, and saved the lives of his fellow soldiers.

Carter, now a Staff Sergeant, received his Congressional Medal of Honor on August 26th, 2013. He has also received the Purple Heart. And in addition, we hope that he has found peace in his personal life as well. He met a woman named Shannon who also had a child from a previous relationship. The two got married, had a child together, and settled down in the town of Antioch, California to raise their mini Brady Bunch.

Specialist Ty M. Carter is not only the most recent recipient of the CMO, but he is also the latest honoree here at the website in the ‘Real American Hero’ series. Begun a few years back, it has been on sabbatical for the last couple of years, but is being revived with this article and will continue in the future.

To see the previous honorees and read their inspiring stories, simply click on the below ‘label’, and remember that clicking on these labels in any story will lead you to other article back through the history of the website which deal with that particular topic.