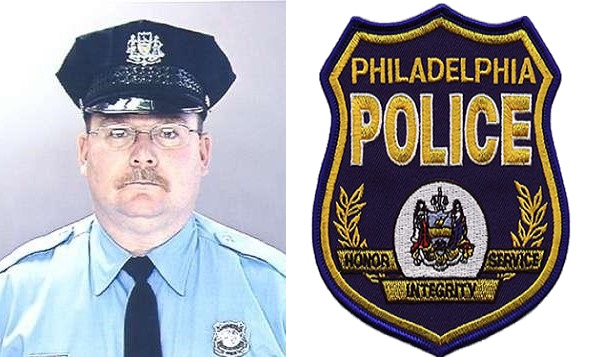 I didn’t find out until about five minutes ago. Last night, I went to bed at around 11:00 pm, and so I missed the news at that time. Just waking up this morning, I poured myself the first cup of coffee of the day, and fired up the computer. Then a local news anchor said those words on TV:

“Our top story, the Philadelphia Police Department is again in mourning this morning…”

My head whipped around to the television screen. Sergeant Tim Simpson of the 24th district was dead following a horrific car crash at approximately 10:45 pm last night. He was killed at Aramingo & Allegheny Avenues while responding to a robbery call, possibly by a drunk driver who was speeding.

This is the second of our officers to lose their in an auto accident within the last few months, after Izzy Nazario was killed back in the late summer.

Simpson is the fourth Philly cop killed during 2008, the fifth within the last full year, the sixth on-duty in a terrible two-and-a-half years stretching back to Gary Skerski’s murder in spring of 2006.

With Walter Barclay’s death from wounds that he received decades ago in a shooting, it marks the seventh Philly cop to die of an on-duty incident in that same time period.

My stomach flips again, and I say a prayer for the officer, his family and friends, his co-workers, and all police officers. It has grown beyond ridiculous at this point. We got almost, almost, a two-month break this time. We deserve years without such tragedy at this point.

Ironically, Simpson had worked closely with Liczbinski, and was the officer given the responsibility of cuffing the murderer of his fellow Sergeant and former partner just this past spring.

This time it will be a brother with a wife and children who we will bury during a season when we, and they, are normally supposed to be giving thanks.

To make matters possibly worse to me, I saw a picture of the officer. He looked a lot like an officer who I served with early in my police career back in the 6th district, Terry Simpson.

I wonder if they are related, possibly brothers. That would make an already intolerable situation even more personal, with my own brother also on the job and both of us knowing Terry. We will find out more of these details in the coming hours and days, but there is one thing that we already know.

The Philadelphia Police Department has a very dark cloud hanging over it right now. The winter cold has settled over the area this morning, the first real morning of frost. It feels even colder now. This has to end. Doesn’t it?

NOTE: I later learned that Terry and Tim Simpson were indeed brothers.