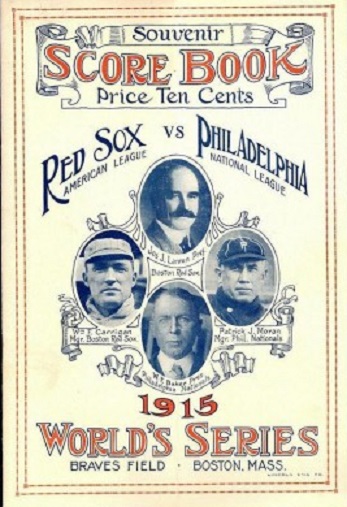 A long time ago in a galaxy far, far away…well sort of, the Philadelphia Phillies appeared in the World Series during the early part of the 20th century.

The Phillies lost the 1915 World Series to the Boston Red Sox and legendary outfielder Tris Speaker by 4 games to 1, marking the second straight season that a team from Boston had defeated a team from Philly for the championship.

The previous year, the Boston Braves of the National League had swept Connie Mack and the Philadelphia Athletics out of the Fall Classic.

It is not likely that there are many left alive who saw or in some other way experienced first-hand that 1915 Series. If you were born that year, you are now 93 years old. So, most everyone – perhaps all who were there, in fact – are now gone.

Much as with their current 2008 brethren, things started well in that 1915 Series for the Phillies. They won the first game here in Philadelphia at the old Baker Bowl, edging the Red Sox by a 3-1 score behind the pitching of ace Grover Cleveland Alexander to take a 1-0 lead in the series.

The Phillies got on the board first in the 4th inning as leffielder George Whitted, nicknamed Possum, singled home center fielder Dode Paskert.

The Sox tied it up in the top of the 8th, but in the Phils bottom half they manufactured a pair of runs to take the 3-1 lead. The 28-year old Alexander, who had won 31 games that season, finished up a complete game win, but not before some baseball history was made.

In that top of the 9th, the leadoff batter reached on an error, and the Red Sox sent to the plate a kid pinch-hitter who they felt had some pop in his bat. It would be the first-ever World Series plate appearance in the big leagues for the 20-year old Babe Ruth, and in fact it would mark his only appearance in the entire Series.

Ruth was in just his second season with Boston, having begun with 10 plate appearances in 1914 and another 92 in that 1915 season, so he had just 102 total big-league at-bats to that point.

Alexander induced Ruth into an easy ground out to the first baseman, then got the final hitter on a popup to first, and the Phillies had their first-ever World Series win.

Little did the franchise’ owners, players, and fans know that it would be 65 years before they would enjoy another.

Game 2 was also at Baker Bowl, which was located in a small one-square block area bordered by Broad Street and 15th Street, Lehigh Avenue and Huntingdon Street.

Approximately 20,000 fans would pack the Baker Bowl for each of the three games played there that fall, and for this second game of the World Series there was more history made. One of those in attendance was President Woodrow Wilson, marking the first time that a U.S. President had attended a Series game.

The game began with the Sox scoring a run in the top of the 1st inning, and it would be their only run until they scored another in the top of the 9th frame. Unfortunately for the Phillies, they could only muster one of their own, and the Red Sox evened the Series at a game apiece thanks to that 2-1 victory.

When the series switched to Boston for Game 3 and 4, the now famous Fenway Park was the Red Sox sparkling new home, having just opened a couple of years earlier.

However, the team ownership often used Braves Field, which had just opened that very year and was the home of the National League Boston Braves (now the Atlanta Braves) for the Red Sox ‘big games’ because Braves Field was larger and held more fans than Fenway.

So the Phils never got into Fenway Park that year, instead playing before over 40,000 rabid sox fans at Braves Field. The Red Sox 2-1 victory in the second game was exactly duplicated in those next two games, with Boston winning each by identical 2-1 scores to take a 3-1 lead in the Series.

Things looked good early on in Game 5 back in North Philly at Baker Bowl thanks to veteran first baseman Fred Luderus, who doubled home a run as the Phillies scored twice in the 1st inning.

Boston answered with single runs in the 2nd and 3rd innings, but then Luderus blasted a solo homer and the Phils rallied for another in the bottom of the 4th for a 4-2 lead.

That lead held all the way into the top of the 8th before Boston left fielder Duffy Lewis cracked a two-run homer off Phils‘ reliever Eppa Rixey to tie the score at 4-4 heading into the 9th inning.

In the top of that 9th, right fielder Harry Hooper, who would be selected to baseball’s Hall of Fame in 1971, broke the tie with a one-out homer, his second of the game.

The Red Sox took that 5-4 lead into the bottom of the frame where the Phillies went down in order meekly.

Both of Hooper’s homers actually bounced over the fence in what would be considered ‘ground rule doubles’ today. The center field fence that his 9th inning, game-winning homer had bounced over was erected especially for the World Series to allow more seating capacity at Baker Bowl.

Boston celebrated it’s third World Series championship, having won the first-ever modern series in 1903, and then again winning it in 1912.

For the Phillies, that first-ever World Series championship would have to wait all the way until 1980.

But it was in 1915 that the Phillies got their first taste of the World Series, only to fall short thanks to four consecutive frustrating one-run defeats.