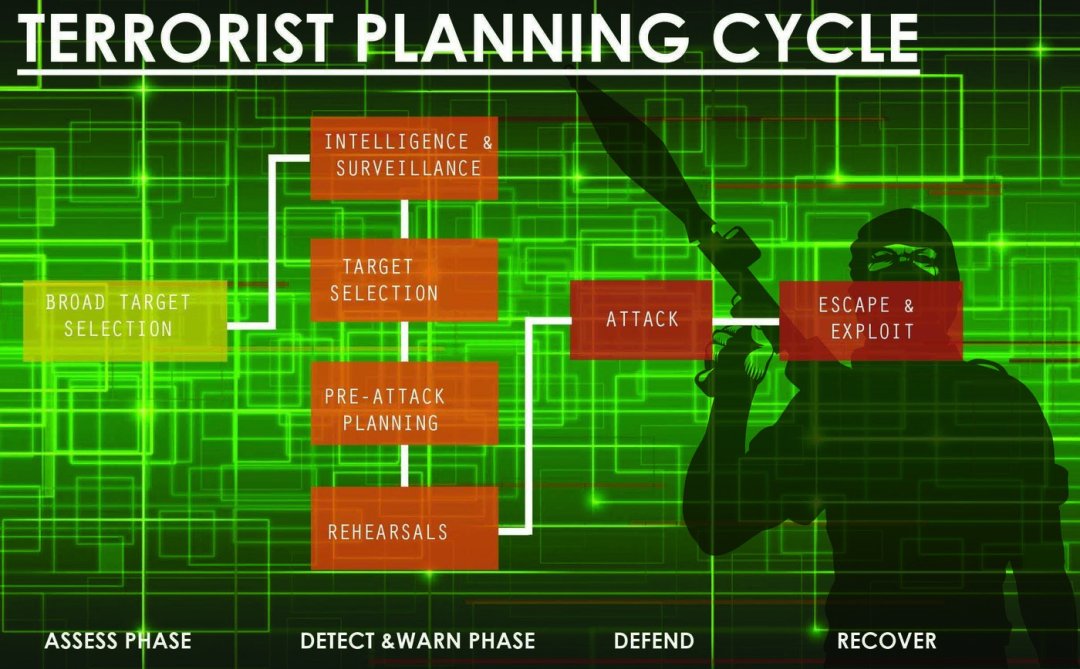 There is a video currently available from the Delaware State Police at their website entitled the “Seven Signs of Terrorism”.

In this conscise video presentation, the DSP posits the seven signs that we should all be watchful for as: Surveillance, Elicitation, Testing Security, Acquiring Supplies, Suspicious Persons/Vehicles, Trial Runs, Deployment of Assets.

Knowing and putting into practice a response to these signs will help protect you, your family, and your nation as a whole. This is particularly vital in these days where our society is under direct, sustained, committed attack by islamofascist terrorism.

In the area of Surveillance, you should be on alert for someone who might be taking photos, drawing maps or schematics, or constantly found loitering in the area, especially in a clandestine manner, of important facilities, insfrastructure, and public places.

The Department of Homeland Security website is an excellent source of information to help you know the who, what, when, where, how of possible attack targets.

In the area of Elicitation, a subject would be attempting to gain some further information on the object of their surveillance. You may be approached directly, either in your role as an employee of the facility, as a delivery person, even simply as a passerby. They may be looking for information such as operating hours, access roads, traffic patterns, etc.

When they have advanced to Testing Security, the subjects will actually probe the perimeters of the facilities in question, perhaps even going so far as to enter the facility, all in an effort to see what the security response will be, if any. They will always have some legitimate excuse to be where they are, or a good “I’m lost” cover story to tell.

If you are an employee at a business such as Home Depot or Lowe’s, you might notice a large purchase of fertilizer by a private individual. This is but one example that terrorists may be at the stage where they are Acquiring Supplies. The purchase of bomb-making materials, weapons, etc is something that should be pointed out to the store and/or to law enforcement.

The Heritage Foundation reports that there have been 19 thwarted terrorist attacks since 9/11, and your vigilance can help thwart the next one.

Observing any Suspicious Persons or Vehicles is a concept that anyone can understand. If he/she/it doesn’t belong or looks like they don’t belong, if something or someone looks out of place, perhaps it would be wise to take a second look, and possibly even report the person and/or vehicle to authorities. Be careful if directly confronting anyone falling into this category on your own, even if the property they may be intruding upon is yours.

When conducting a Trial Run, the person or organization attempting to pull off the terrorist act will go through all the motions without actually taking their ultimate action. This is their “run through” or practice run, and the totality of their actions could be very suspicious. At this point, they are far along the preparation stage, and you should absolutely not intervene, but let law enforcement know of your concerns.

Finally comes the phase where they will actually Deploy Assets, placing the packages, bombs, weapons, decoys, and other equipment and personnel to carry out the act. This is the time for not only notifying law enforcement, but a time that may also require your judicious use of direct intervention, depending on what is going on and your own self-assessment of your ability to respond.

The Counterterrorism Blog regulary updates with attempts both here in the U.S. and around the world.Some would say that you should NEVER directly intervene, and that you should always contact law enforcement or the military and let them handle things.

The fact is that in the current climate, where terror organizations have publicly stated their intentions to attack us, you may not always have that kind of time in order to thwart the action. Men and women have been called on before in our history to directly defend our nation, and these types of callings will undoubtedly occur in the future.

Stay alert, stay ready. Don’t live in fear, but do live with knowledge and with courage, and with a deep desire to help preserve, protect, and defend our country and our American way of life. Simply by knowing these Seven Signs of Terrorism and remembering them, you are making a start.