Jay Bruce about to get doused after his Wednesday walkoff

The Philadelphia Phillies (42-38) completed their first walkoff victory of the season, downing the New York Mets (37-44) by a 5-4 final score on Wednesday night at Citizens Bank Park in South Philadelphia. With the win, the Phillies remain tied for an NL Wildcard playoff spot.

For a third consecutive night the Phillies fell behind early. And for a third straight game the offense rallied to bring home a victory. For a club that had languished in a disheartening three-week slump, you can almost feel the energy turning around them, building with each bamboo-inspired victory.
After Phillies starter Nick Pivetta and Mets starting pitcher Jason Vargas battled through the first three innings scoreless, the visitors jumped on the board first courtesy of the longball. Dominic Smith drove his 7th homer of the season out on a line to left to put New York on top 1-0 with one out in the top of the 4th inning.
In the top of the 5th it was new Phillies-killer Jeff McNeil blasting his 6th home run of the year over the center field wall to make it 2-0.
The Mets scored twice more in the very next inning to double their lead. Smith led off by drawing a walk. He then stole second base, and when J.T. Realmuto threw the ball away, Smith went to third. Amed Rosario then walked, and then Tomas Nido singled to bring Smith home, making it 3-0. With two outs, McNeil did it again, ripping a double to right field that scored Rosario to make it 4-0 for the visitors.
In the bottom of the 6th inning, Jean Segura finally got the Phillies on the board with his 9th homer to left-center field. Then the Phillies got even by putting up a crooked number, scoring three times in the home 7th to tie it up. 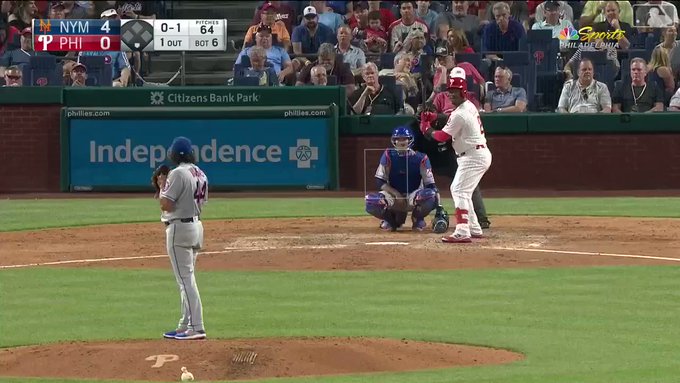 100 people are talking about this
Twitter Ads info and privacy
Realmuto started it off with a double. One out later, J.T. sprinted home on a ground-rule double to right off the bat of Cesar Hernandez. With two outs, Brad Miller drew a walk as a pinch-hitter to put the tying run on base. The Phillies then got a huge break when Scott Kingery struck out, but reached base anyway when the ball got past Nido on a wild pitch by Lugo.
Thanks to that break, the Phillies had the bases loaded, with the tying run in scoring position. It was up to them to take advantage, and Segura did just that. His base hit to center scored both Hernandez and Miller to tie the ball game.
That would be all the scoring in regulation, and the two teams moved to the bottom of the 10th still knotted at four apiece. Rhys Hoskins led off the frame by drawing a walk. Realmuto then worked the count to 2-2 before drilling a base hit to center field. Hoskins had to freeze to ensure that the ball went through cleanly, and so the Phillies had runners at first and second with nobody out.
With the potential winning run in scoring position, Phillies manager Gabe Kapler took a calculated gamble. He brought in one of the fastest men in the game, Roman Quinn, to pinch-run for his cleanup hitter Hoskins at second base.
The next batter was Jay Bruce, who has come through for the Phillies so many times already since being acquired in a June 2 trade with Seattle. He would come through once again here.
After taking a first-pitch ball, Bruce crushed the second pitch he saw  from Mets reliever Stephen Nogosek over the head of center fielder Juan Lagares. Quinn rushed around to score easily, and the Phillies enjoyed celebrating their first walkoff victory of the 2019 season. 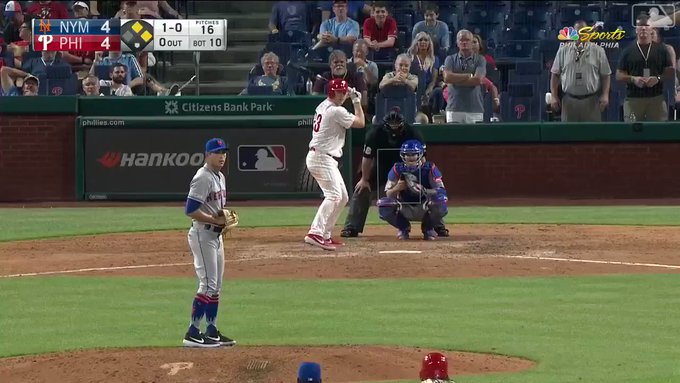 35 people are talking about this
Twitter Ads info and privacy
“Before the game today, I had a conversation with Jimmy Rollins in the kitchen, and he mentioned how impressed he was with the fight of our club the last couple days,” said Kapler in his postgame presser. “He mentioned that he saw guys playing hard and really getting after it, and never feeling like they were out of any inning or any game…I think tonight was an indication of how resilient we are. How we never feel like we’re out of a game, particularly when we’re swinging the bats like we’re capable. Always feels like we can take a late lead, and really proud of the guys tonight. They worked hard.”
Appearing on their death beds coming into this series with the Mets, the three straight come from behind victories were just what the doctor ordered for the suddenly Fightin’ Phils. Tomorrow afternoon they will try for a four-game sweep of the reeling boys from the Big Apple.

The Phillies left fielder went 2-5, and provided the margin of victory with his 10th inning double. However, we have to give a nod to the Phillies bullpen. Relievers Jose Alvarez, J.D. Hammer, Adam Morgan, Hector Neris, and Edgar Garcia combined to shut the Mets out over the final 4.1 innings, allowing just two base runners. Garcia was credited with the ‘W’ in the end.

Originally published at Phillies Nation as “Phillies rally from behind once again, walkoff the Mets in 10 innings“