The Philadelphia Phillies announced today that a baseball legend will become the 39th honoree on the Phillies Wall of Fame.
1980 World Series hero Pete Rose will be enshrined in a ceremony that will take place on Saturday, August 12, 2017. The ceremony will take place prior to a game against the division rival New York Mets.
On that night, numerous Phillies greats of the past who have been honored previously will return to take part in the ceremony. There they will welcome “Charlie Hustle” to the ranks of Phillies immortals.
Rose was one of 10 former Phillies greats who were originally nominated for the 2017 Wall of Fame slot. Fans of the team voted online at the start of the year from among 10 nominees to determine three finalists.

THE OTHER 2017 WALL OF FAME NOMINEES

Joining Rose among those original 10 nominees were three of his 1980 champion teammates. One of those was second baseman Manny Trillo, the 1980 NLCS MVP. The others were starting pitcher Larry Christenson and reliever Ron Reed.

Two more relief pitchers, Gene Garber and 1987 Cy Young Award winner Steve Bedrosian, were also nominated.
Another nominee was the late Jim Fregosi. He was the manager of the popular 1993 NL Pennant-winning Phillies team that electrified the city that summer and fall.
Rick Wise was a pitcher during the 1960’s and early-70’s who was traded straight-up for Wall of Famer Steve Carlton. He played longest ago for the Phils among the nominees, having first appeared on the infamous 1964 team. That Phillies team collapsed down the stretch, blowing the NL Pennant.
Among the most recent to play for the club and receive nominations were infielders Placido Polanco and Scott Rolen. The latter was the 1997 NL Rookie of the Year. Both players won Gold Glove Awards at third base while playing with the Phillies, Rolen on four occasions. 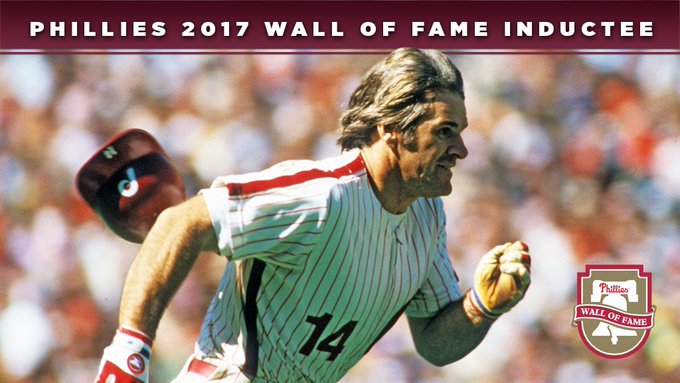 Rose is a no-doubt-about-it Baseball Hall of Famer based on the record. He is the game’s all-time Hit King, having amassed 4,256 total hits over a 24-year career in Major League Baseball.
Rose helped lead the ‘Big Red Machine’ Cincinnati Reds to back-to-back World Series crowns in 1975 and 1976. He was MVP of the 1975 classic seven-game victory over the Boston Red Sox.
He was the 1963 NL Rookie of the Year, the 1973 National League Most Valuable Player, and a three-time NL batting champion. In addition, Rose won a pair of Gold Glove Awards, and was a 17x National League All-Star.

ROSE LEADS THE PHILLIES TO A WORLD SERIES CROWN

Following the 1978 season, Rose became a free agent. The Phillies had won three consecutive NL East crowns at that point. But that team, led by future Hall of Famer Mike Schmidt, had fallen short in the playoffs each year. Believing that leadership and winning experience were lacking, the club made Rose it’s first-ever big-ticket free agent signing that winter.
After an injury-marred 1979 season in which the Phils dropped from first place in May to a fourth place finish, the club rallied in 1980.
The Phillies held off the Montreal Expos on the final weekend of the regular season to clinch a fourth NL East crown in five years. Then the club fought past the Houston Astros in a grueling five game series that many believe is the greatest NLCS in history.
Finally, the Phillies held off a veteran Kansas City Royals squad in six games to win the first-ever World Series crown in franchise history. Rose hit .326 with a .431 during that 1980 postseason, and provided a signature moment with a hustling defensive play in the 9th inning of the clinching game of the Fall Classic.
As all baseball fans know, there is only one reason that Rose is not enshrined in the Hall of Fame. That would be the controversy surrounding his gambling on the sport. Due to this issue, Rose agreed to a suspension from the game. Therefore he was mostly out of the game in any official capacity for over two decades.

But last year, Major League Baseball allowed the Reds to honor Rose formally with a place in their team Hall of Fame. As a result, he was feted in a ceremony held in late June of 2016.
Rose was also a member of the Fox Sports crew analyzing the MLB postseason last Fall, joining Alex Rodriguez and Frank Thomas on what became a popular panel among fans of the game.
The Phillies received permission to consider him for their club Wall of Fame this off-season. As a result, they jumped at the chance to place Rose among this year’s nominees.
When the Reds announced that Rose would be honored, I wrote in a piece for FanSided’s “That Ball’s Outta Here” that the Phillies should do the same.
At that time I wrote: “for this fan who was around to see the obvious influence that Rose had in finally bringing a championship to Phillies fans, he is absolutely deserving of a plaque on that wall.”
I have no doubt that Citizens Bank Park will be see a full house for this summer’s upcoming Rose enshrinement. Finally, fans will be able to enjoy viewing and reading a Rose plaque on the Wall of Fame out on Ashburn Alley in center field.