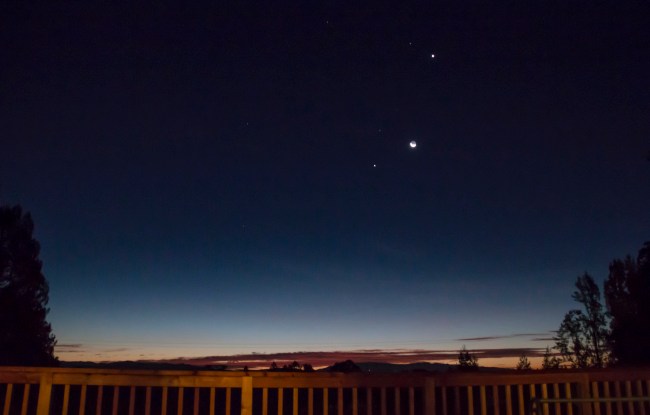 The news has been featuring an upcoming celestial happening in recent days, the coming great conjunction of the planets Jupiter and Saturn. This “meeting in the sky” will reach its peak on Monday, December 21, but can also be seen tonight (December 20) as well as December 22.

It will mark the first time in 400 years that the two largest planets in our solar system appear so close together. To be exact, it happened last in 1623, the same year in which the Pilgrims were celebrating the second-ever Thanksgiving at Plymouth Plantation.

However, those celebrants would not have been able to see it due to the position in the sky of the two planets, which rendered it unviewable to most humans at the time. You have to go all the way back to March 4th in the year 1226 for the last time that the event was viewable from most of our planet.

On December 21 of this year, Saturn and Jupiter will be about the “thickness of dime held at arm’s length” apart in the sky, according to a NASA statement per Space.com’s Doris Elin Urrutia. This alignment is the “greatest” great conjunction between Jupiter and Saturn until the year 2080, NASA officials added.

From here in Philadelphia and other places in the northern hemisphere of Earth, the “star” can be seen by looking to the southwest sky approximately 45 minutes to an hour after sunset, in that exact same direction in which the sun went down. It can be observed for about an hour.

“They’re not close in space – they’re still hundreds of millions of kilometers apart from each other,” said NASA Astronomer Henry Throop. “But … they appear as two points very close in the sky.“

With the event falling just days before Christmas, many have taken to nicknaming the event as the “Christmas star”, relating it to the Star of Bethlehem from the Gospel of Matthew. That star led three magi from the East to the place where Jesus was born.

However, this event is actually not likely the return of Jesus’ star. Eric M. Vanden Eykel discussed this in a piece for Space.com in which he did say “Matthew would likely be pleased with the awe it inspires in those who anticipate it.“

If the star which hovered over Bethlehem was indeed a natural phenomenon, it is more likely to have been caused by a convergence of Jupiter and Venus. Eric Betz wrote a story on Saturday for Discovery Magazine: “...in the summer of 3 B.C., Jupiter and Venus met in an event that would have looked much like the upcoming “Christmas Star,” also referred to as the Great Conjunction of December 2020.“

Though the current celestial happening may not be the exact “star” which led those three wise men to Jesus in the first century, it is a nice bonus for us during this Christmas season that news analogies are serving as a reminder of that earlier miraculous event.

If you get a chance to view this 2020 “Christmas star”, take a moment to reflect on the more important star and event which we celebrate just a few days later. The birth of Jesus, the savior of us all.