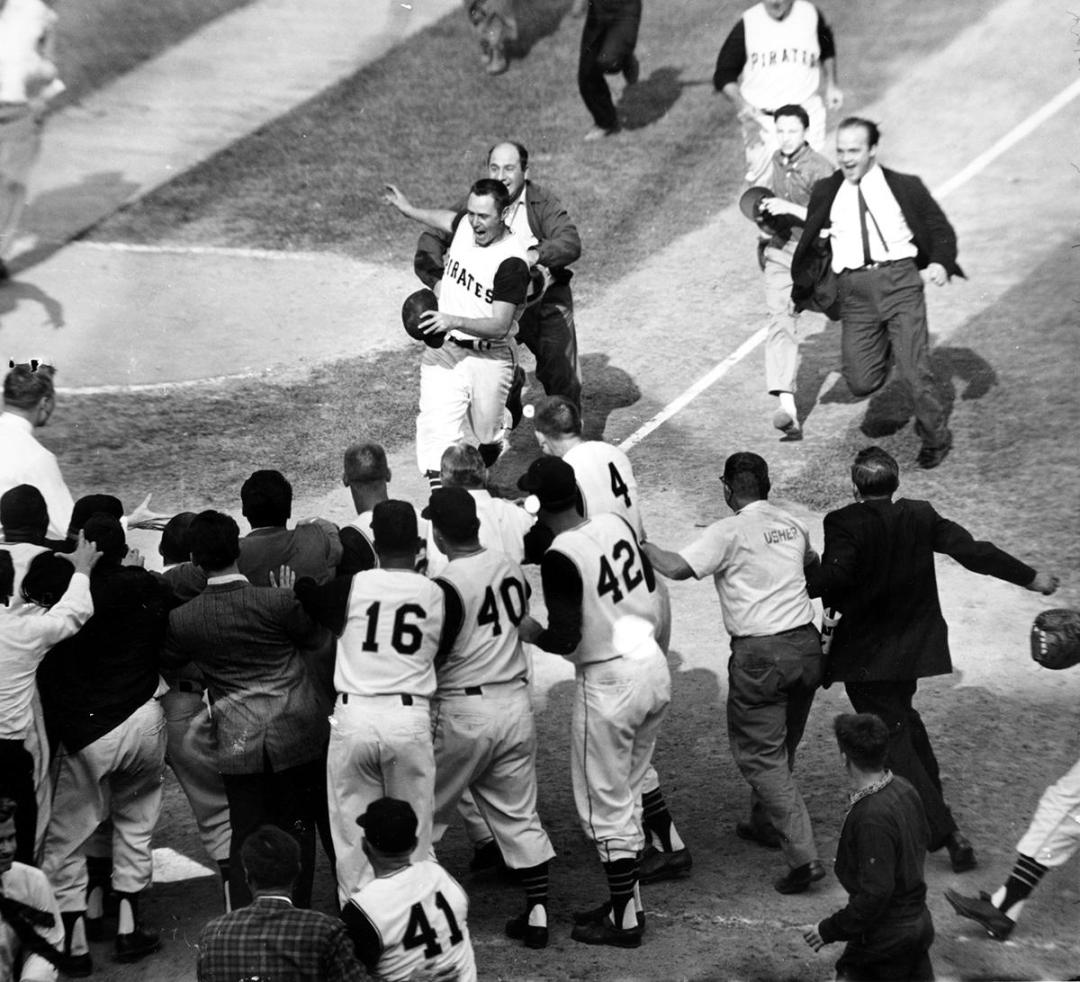 The 1960 New York Yankees won their final 15 straight games and 19 of their last 21 regular season contests. Those Yanks won 97 games, pulling away in September to win the American League pennant. Perennial contenders, the Bronx Bombers had finished on top of the AL in 21 of 40 seasons and worn 18 World Series crowns during that time.

Over in the National League, the Pittsburgh Pirates were, well, not perennial contenders. The Pirates had finished in either 7th or 8th place in the senior circuit every year from 1950-57. But a more talented Bucs team began to emerge in the late-50’s featuring youngster such as Roberto Clemente and Bill Mazeroski. The Bucs took command of the NL race during the month of August that year, coasting home to capture the first NL pennant for the franchise in 33 years.

Most pundits saw the Yankees, led by in-their-prime outfielders Mickey Mantle and Roger Maris and veterans Yogi Berra and Whitey Ford, as big favorites to win the Fall Classic that year. And sure enough, the Yanks dominated the Pirates in three of the games with 16-3, 10-0, and 12-0 routs.

But the pesky Pirates hung in the series with wins in three of the first six games, all close affairs. This set up a dramatic seventh game at Forbes Field. In that Game 7, Pittsburgh jumped to an early 4-0 lead. The Yankees offense countered in the middle frames, taking a 7-4 lead into the bottom of the 8th inning. The Pirates then rallied for five in the bottom of the 8th inning, capped by a two-out, three-run homer off the bat of catcher Hal Smith, who had just entered in the top of that inning as part of a defensive double-switch by manager Danny Murtaugh.

It all led to a thrilling final inning. Trailing now by 9-7 the Yankees rallied back on an RBI single by Mantle and RBI ground out by Berra to tie things up, sending the game to the bottom of the 9th knotted up at a 9-9 score. On the mound for New York was 24-year-old right-hander Ralph Terry. Brought in by manager Casey Stengel an inning earlier, Terry had faced one batter and recorded the final out to end the big 8th inning Pirates rally.

Stepping to the plate to lead things off for the Pirates was Mazeroski. The diminutive second baseman was the team’s eight-hole hitter. At age 23, Mazeroski appeared in his third consecutive of what were ultimately seven career All-Star Games. After the 1960 season he would win a second of what would become eight career Gold Glove Awards. Though no pushover at the plate, “Maz” had just a .392 slugging percentage during the regular season. He was considered much more valuable for his glove than his bat.

Terry fell behind 1-0 in the count and catcher Johnny Blanchard took a trot out to the mound to calm him down and discuss a little strategy. Whatever that fateful exchange was between the two, it did not work out well for them. The Yanks’ hurler served up a meatball of a slider that came right over the plate for Mazeroski, who pounced on the offering and slammed it well over the left-center field wall.

That home run remains the only Game 7 walkoff home run in World Series history. The historic Mazeroski blast and the Pirates seven-game victory over the Yankees also serves as a reminder that the perceived heavy favorites do not always come out on top, even if they dominate for large swaths of the series.

That 1960 World Series came to mind as I watched the Los Angeles Dodgers take an early 3-0 lead in Game 5 of the 2020 Fall Classic on Sunday night. The Dodgers had dominated in Games 1 and 3, winning by a combined 14-5 margin, and appeared to be on their way to racking up another big win. But the Tampa Bay Rays had squeezed out a pair of tight victories for themselves and had the series tied at two games apiece. Tampa Bay would battle to keep Game 5 close, but Los Angeles ultimately prevailed by a 4-2 score to take a three games to two lead.

The Dodgers won the NL West by setting a blistering .717 pace that proved to be Major League Baseball’s best in the COVID-abbreviated 2020 regular season, taking the title over an up-and-coming San Diego Padres squad that would have captured any other division in the National League. The Dodgers then swept both the Milwaukee Brewers and those Padres out of the NL playoffs before fighting past the Atlanta Braves in the NLCS.

While the Rays were the American League’s top team by win-loss record in the regular season, they had it rougher in the postseason. Following a sweep of the Toronto Blue Jays in the Wildcard round, the Rays were pushed to the limit to defeat both the Yankees and Houston Astros in the ALDS and ALCS respectively.

Much as with those 1960 Yankees, the Dodgers are a tested perennial juggernaut. They have captured eight consecutive NL West Division crowns and have finished either first or second in the division for 19 of the last 27 seasons. Their fans have suffered through just three losing seasons since 1993, and this year the club won a third National League pennant in the last four years.

And much as with those Pirates of 60 years ago, the Rays have begun emerging as a contender after floundering for a number of years. Tampa Bay finished with a losing record each season from 2014-17. This is only the second-ever appearance in the Fall Classic for a franchise which this year won just their third AL East Division crown, their first in a decade.

There are other examples of a team perceived to be the World Series underdogs forcing the favorites to a Game 7 and coming out victorious. Both the 1997 Florida Marlins in downing the powerful Cleveland Indians and 2001 Arizona Diamondbacks in ending the last true Yankees dynasty won their Game 7’s in dramatic walkoff fashion.

The Dodgers have been there recently. They went to a Game 7 in the 2017 World Series, just three short years ago. In that one, Charlie Morton came on in relief and mostly stymied them over the final four innings. The Houston Astros won 5-1 to capture the series, celebrating in front of the LA fans at Dodger Stadium. Morton, now with the Rays, looms as a likely Game 7 starter this year should Tampa Bay be able to force that ultimate contest.

Los Angeles needs to come out confident and determined to end this in Game 6. They must push the fear of defeat squarely into the forefronts of the relatively inexperienced minds of the Tampa Bay players as early as possible. The Dodgers had best finish off the Rays in Game 6 on Tuesday night. That, or risk someone like Kevin Kiermaier or Randy Arozarena turning into an LA nightmare version of Mazeroski, or Edgar Renteria, or Luis Gonzalez in a Game 7 on Wednesday night.

NOTE: This piece was originally published in the IBWAA “Here’s the Pitch” newsletter dated Tuesday, October 27, 2020 and held for publication at Phillies Bell until 11/5/2020. It was then back-dated here at The Bell.