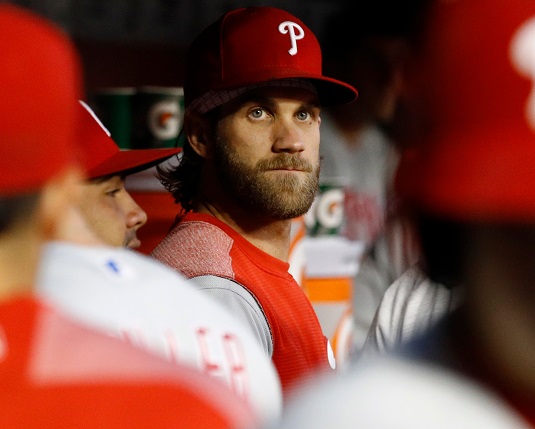 Fans of the Philadelphia Phillies are looking forward in anticipation towards what we all hope will prove to be one of the most exciting weekends for the team in nearly a decade.

The Phillies are in Tampa Bay for a series with the talented Rays, a team that has already clinched the American League East Division crown. The Rays at 37-20 lead the second place New York Yankees in their division by five games with just these three against the Phillies remaining on their schedule.

While this weekend means little to the Rays in the standings, it means everything to the visiting Phillies. The top two teams in every division will automatically reach the playoffs, and the Phillies are just a game behind the Miami Marlins for that spot in the National League East Division.

The Phillies are also battling a handful of other ball clubs for one of two Wildcard berths, should they fall short in that bid for second in the division.

The Braves and Dodgers have won their respective division races. The Cubs ‘Magic Number’ is down to two (2) over the Cardinals to clinch the NL Central Division crown. The Padres have clinched second in the NL West and an automatic berth.

Here are the NL playoff scenarios for the Phillies based on how the club fares this weekend:

This would clinch a playoff berth for the Fightin’ Phils. They would finish with a winning record at 31-29, the club’s first winning regular season final record since 2011. If the Marlins go 1-2 or 0-3 vs the Yankees this weekend, the Phillies take the automatic second place NL East berth. If the Fish go 2-1 or better, Miami takes that second place slot and the Phillies would slide into one of the two available Wildcard berths.

In this scenario the club would finish exactly at the .500 mark for a second straight season with a 30-30 record. They could still take the automatic NL East second place slot, but only if Miami gets swept by the Yanks. If the Fish win at least one game, Miami would take the second slot and the Phillies are again left to try scrambling for one of those two Wildcard berths.

Either the Reds, Cardinals or Brewers will take the NL Central second place automatic berth. The Cards-Brewers began a five-game series with one another on Thursday night. That includes a Friday doubleheader. The Reds visit the Minnesota Twins for a three-game series.

Whichever two NL Central clubs miss out would be battling the Phillies and San Francisco Giants for the two Wildcard berths. In going 2-1 this weekend, the only way that the Phillies can beat out Cincinnati would be for the Reds to get swept by the Twins. San Fran will host San Diego in three-game series beginning Friday night.

While this could change in hurry, let’s assume Saint Louis, which holds a two-game lead on Cincinnati and three-game lead on Milwaukee in the loss column headed into the weekend, takes that automatic second place NL Central slot. That likely pushes the Brewers out of the race, leaving the Phillies in this scenario in which they go 2-1 over the weekend to battle the Giants for the final spot.

The Phillies would need San Fran to do no better than 2-2 vs San Diego. That would give the Phillies the final playoff berth since they win a tie-breaker with the Giants in this scenario.

The Phils would finish with a losing record for the eighth time in nine years and could not beat out the Marlins for that automatic second place NL East berth.

With a losing mark it would be tough for the Phillies to get a Wildcard spot – but not impossible. The key would become the special 2020 MLB tie-breakers. The first of those is head-to-head results. That would not matter, other than to possibly sort out the Cards-Reds-Brewers battle.

The second tie-breaker is each team’s intra-division record. This would be used to break ties even if the teams are from different divisions. The Phillies finished with a 21-19 mark against the rest of the NL East. Here are the current intra-division records of the other relevant teams:

Phillies fans would be better off rooting for the Cardinals to knock the Brewers completely out of the mix this weekend in this scenario, giving Saint Louis the automatic second place NL Central playoff berth. If the Cards take three of four against Milwaukee, the Brew Crew cannot beat out the Phillies.

Then the Phillies would need San Diego to take at least three of four over San Francisco. That would mean the Giants could not beat out the Phils either. If San Fran goes at least 2-2 against the Padres in this scenario, the Phillies would be eliminated.

Bottom line, if the Phillies win just one of three over this coming weekend in Tampa, they are likely done.

See you next February in Clearwater, assuming the pandemic situation allows it. If the Phillies get swept by Tampa Bay there is only one way that they can get in at 28-32.

For the Phillies to get in after losing three in Tampa, the Giants would also need to get swept in four games by the Padres while the Brewers do no better than win one of four against the Cards. That would leave all three of the Phillies, Giants, and Brewers tied at 28-32, and the Phillies would take the tie-breaker.

The Phillies likely must win at least two of the three games this weekend. A sweep would be preferable. Taking the mound for manager Joe Girardi will be Vince Velasquez, Zack Wheeler, and Aaron Nola.

The opener is so important for all the reasons mentioned. Winning that first game would set up a truly exciting, playoff-caliber weekend for Phillies fans.