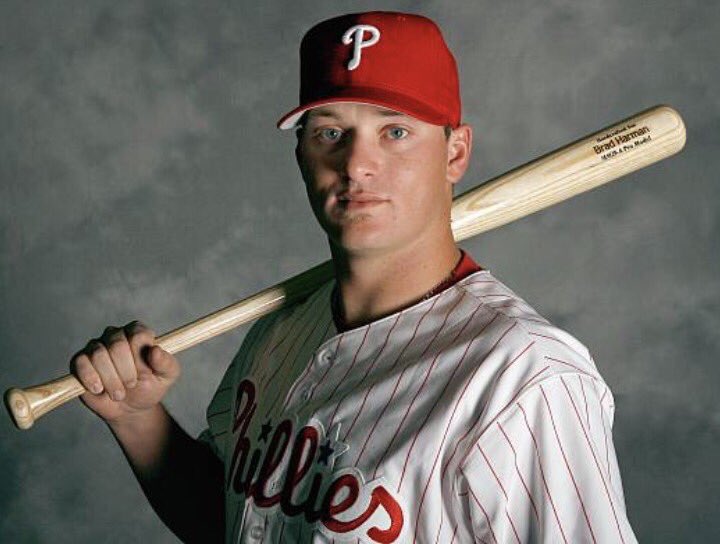 In 2003 the Philadelphia Phillies signed a 17-year-old Australian to their organization. Five years later he would appear in a half-dozen games for a club that would go on to win a world championship.

The position player entry for our ‘Phillies 50’ series chosen as the most random player on the 2008 World Series team is infielder Brad Harman. After signing from Down Under, Harman made his U.S. debut in the summer of 2004 with the Phillies rookie-level affiliates in the Gulf Coast League.

That began a busy stretch of baseball for the teenager. Following that season he played for Australia’s under-19 national team and then moved on to play in the Claxon Shield, which was the premier baseball competition in Australia for over 75 years until ending in 2010. Harman was honored in that 2005 Aussie season with both a Gold Glove and the Helms Award as Most Valuable Player.

Harman’s success then continued back in the United States when he hit .303 with 11 homers and 58 RBIs while playing with Low-A Lakewood in the summer of 2005. Then in September he continued on, representing Australia as part of their team that went 4-4 at the 2005 World Cup.

Moved up to Double-A Reading for the 2008 season, Harman had no clue that he would be getting his first big-league opportunity before the first month of the season had even been completed.

Due to an injury to shortstop Jimmy Rollins and a lack of strong Triple-A options, the Phillies decided to reach down into the system and give Harman his first shot at age 22.

On April 22, 2008 at Coors Field in Denver, manager Charlie Manuel sent Harman in to pinch-hit for reliever Ryan Madson. Pat Burrell had just delivered a bases-loaded, three-run double to push the Phillies in front of the host Colorado Rockies by 8-6 in the top of the 9th inning. Facing Rockies’ reliever Manny Corpas, Harman popped out to shortstop for the final out of that frame.

Harman would stay with the Phillies for just over two weeks, appearing in five more games. On April 25, 2008 at PNC Park in Pittsburgh, Manuel gave Harman his first starting opportunity. In the top of the 4th inning with the Phillies leading the host Pirates by 4-0, Harman ripped a double to left-center field off Zach Duke to score Eric Bruntlett for his first big-league hit and RBI. He would later score on a Jayson Werth base hit.

In all, Harman would appear in six games with the Phillies. He went 1-10 at the plate, made a pair of starts at shortstop, played third base briefly in one game, and made four pinch-hitting appearances. The double, run scored, and RBI against Pittsburgh were his only offensive contributions. He made just one appearance at Citizens Bank Park, a pinch-hitting appearance on May 4 against the San Francisco Giants.

Sent back to Double-A when Rollins returned on May 9, Harman would not get another shot at big-league life. He slashed just .206/.276/.339 as the primary second baseman for Reading over the 2008-09 seasons combined.

On August 31, 2009 he was designated for assignment by the Phillies. That gave Harman a chance to quickly join the Australian national team for the World Cup. He was then granted free agency in November but would never sign on with another MLB organization.

In 2010, Harman was involved in an unusual situation that resulted in his being suspended by the Australian Sports Anti-Doping Agency (ASADA) for 14 months. The ASADA requires all Australian athletes to lodge details of their whereabouts when traveling outside the country as part of their efforts to conduct random drug testing. Harman had failed to check-in on three required occasions, resulting in the suspension.

“The difficulty of course with baseball is that a number of our athletes are part of the minor leagues in North America in the US and as such are often at different teams for short periods of time,” said Australian Baseball Federation CEO John May per the Herald-Sun following the announcement. “It’s much more onerous on players and athletes like Brad, to continually update Australian Baseball, and therefore the information that we provide to ASADA, on where they are at that particular point of time.”

Harman was able to rejoin the Melbourne Aces, his hometown team, for the 2011 season. He hit .305 that year and broke the Australian record by slamming 15 home runs over 34 games in the Australian Baseball League, which plays a 46-game season.

He continued to play with Melbourne as their starting shortstop through 2014, including during a preseason pair of exhibitions for the MLB Los Angeles Dodgers and Arizona Diamondbacks. As that series ended there were rumors that Harman could be signed by the Dbacks.

“To be honest, I’ve had absolutely no contact,” he said per Josh Spasaro at Northern Star in March 2014. “I’d love to be able to get on a plane, get out of work and go over there to play baseball. It’d be great if it happened, but I’ve received no contact as yet. I love mentoring young players at the Aces and in the Australian team – it’s a role I’ve been happy to embrace.”

Harman became a utility infielder over this final two seasons, ending his professional career after the 2016-17 campaign. His final game on February 11, 2017 came when his Aces squad, led by current Atlanta Braves young star outfielder Ronald Acuna Jr. were eliminated in the ABL playoff Finals.