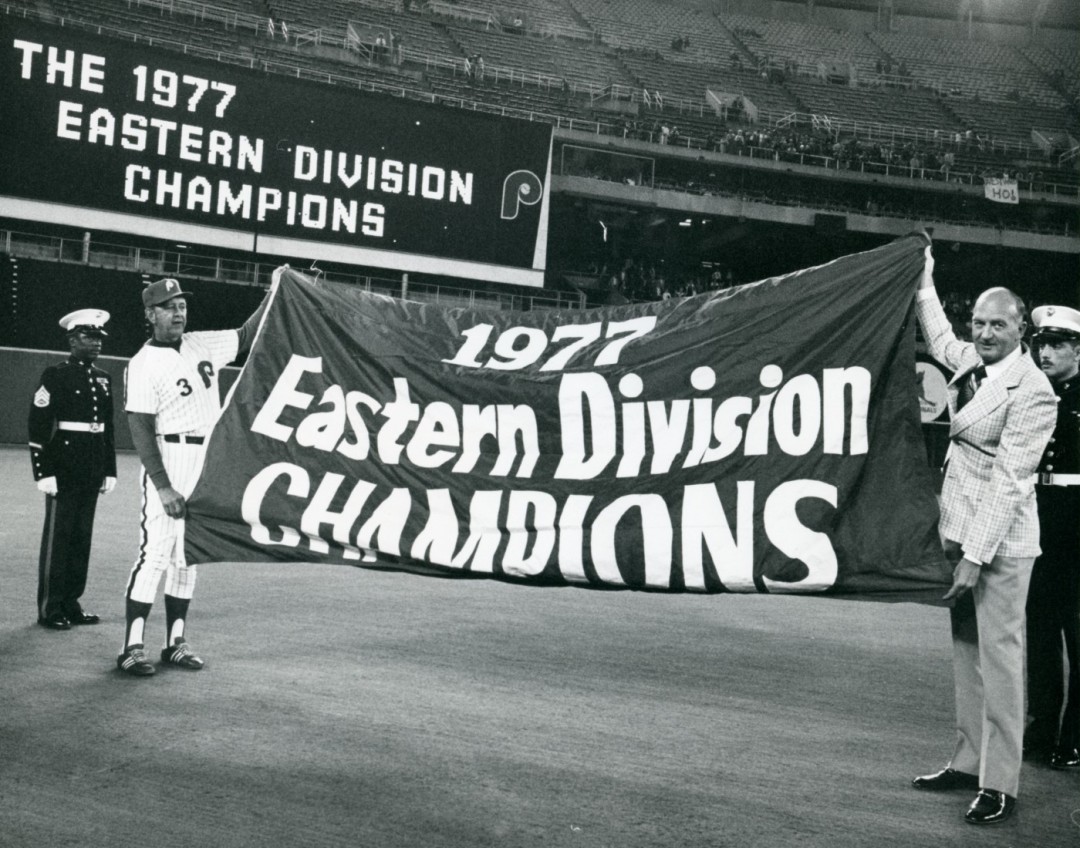 Fresh from their first postseason appearance (1976) since the 1950 Whiz Kids, the 1977 Phillies season had high hopes, a rough start (1–6) and a more painful ending (Black Friday).

Many considered that club to be the best of that era, especially after Bake McBride was acquired in a mid-season trade. He hit .339 in 85 games as the new every day right fielder. Paul Owens got Bake (plus P Steve Waterburg) from St. Louis on the June 15 trade deadline for Tommy Underwood, Rick Bosetti and Dane Iorg.

The National League East was clinched with a 15–9 romp in Chicago, Game #157, on September 27 with Christenson starting, winning and hitting a home run. It was LC’s 18th win, 14th in last 15 decisions.

NLCS
The Los Angeles Dodgers stood in the way of a trip to the World Series, a best-of-five NLCS. A split of two games in Los Angeles sent the series to the Vet where we were almost unbeatable, 60–21.

Game 3 turned out to be a game like no other in club history. LA starter Burt Hooton began to struggle with his control in the second inning, sending the Vet crowd into a tizzy. With each ball out of the strike zone, the crowd got louder and louder. 61,719 literally hooted Burt out of the game as he walked three consecutive batters forcing in three runs to give us a 3–2 lead. LA tied it in the fourth, 3–3.

Two runs in the eighth put the Phillies up 5–3. The Vet was shaking, literally. Three more outs were needed. All the glee turned sour in just five batters in the top of the ninth. Gene Garber was in his third inning of relief. He had retired eight straight Dodgers on ground outs and was one out away from a save.

Pinch-hitter Vic Davalillo laid down a bunt for a base hit. Pinch-hitter Manny Mota hit an 0–2 pitch to left field. Luzinski went back to the fence, leaped, had the ball in his glove but couldn’t hold it. Relay throw got away, putting Mota on third with the tying run. Davey Lopes hit a hot smash to third. The ball went off Schmidt’s glove but the ever-alert Bowa grabbed it bare handed and fired to first for an apparent game-ending out. Umpire Bruce Froemming called Lopes safe. An errant pick-off throw from Garber moved Lopes to second from where he scored the winning run on a Bill Russell grounder up the middle.

The game is forever remembered as Black Friday. The bitter loss sucked the life out of the team. Playing in a steady the rain the next night, the Dodgers advanced to the World Series, 4–1. Rain or shine, it didn’t matter. Black Friday had unofficially ended the season.

Garber, when talking about his fondest post-season memory, said, “My fondest postseason memory was a game that also turned into my greatest nightmare.” TV replays showed Lopes was out but Froemming had the call. To his credit, Garber never pointed the finger at Bruce. Everyone else in Philadelphia did and still do.

Originally published at Phillies Insider on April 8, 2020. Reprinted by permission of the author.