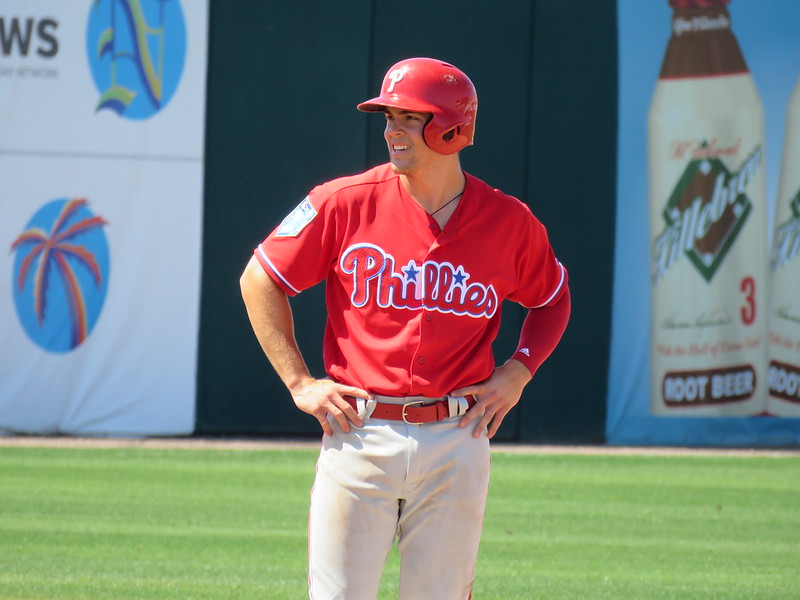 The classic 1971 song “Anticipation” by Carly Simon keeps popping into my head. With the halt of almost every public event for the next few weeks it’s hard to imagine what professional athletes are doing to keep themselves keyed up.

The down time will most certainly change the approach of some players. That goes especially for rookies, who are anticipating their firsts. First time assigned a locker in the dressing room. First time stepping on a big-league field for a real game. First time being introduced to an Opening Day crowd. First time signing autographs as an official big-leaguer.

When the Phillies do (hopefully) finally begin play this year, one of our players should be relieved that he is beyond such rookie anticipation. Scott Kingery is finally getting a chance at the every day second base role.

No more waiting for the lineup to come out to see what position he’s playing today. No guessing games involved. Joe Girardi has made it clear that second base is his. That alone should be a relief to Kingery, who has been touted by many as a very important piece in the team’s pursuit of a championship.

Kingery was selected by the Phillies in the second round of the 2015 MLB Amateur Draft out of the University of Arizona. He created quite a stir when the Phillies signed him to a six-year, $24 million contract in March 2018 before he had even made his major league debut.

Was that confidence from the organization in his abilities? A shrewd negotiation tactic to secure future budget and salary certainty? The anticipation of locking up a good-looking prospect before the player might price themselves into a skyrocketing contract is certainly to a team’s advantage. But it really only pays off if that player performs well.

I’m thinking now along the lines of J.T. Realmuto. Sure, he’ll be paid well with his extension (he BETTER get an extension.) But the Phillies got the best catcher in baseball for a relative bargain contractually last year. At any rate, Kingery has not performed well enough yet to worry about the club options on his deal for 2024, 2025, and 2026 which would enhance the contract to the $65 million level.

In his rookie season, Kingery hit .226 with eight home runs and 35 RBIs in 452 at-bats. He played in 147 games, the bulk of which (119) were at shortstop. Last year, when Gabe Kapler used him as a veritable chess piece, Kingery played in only 126 games due to spending time on the Injured List.

Even so, his performance improved over 2018. Kingery hit .258 with 19 home runs and 55 RBIs in 458 at bats in the 2019 season. He played six different positions at one time or another: 64 games in center field, 41 at third base, 18 at shortstop, 10 in left field, one game in right field, and only 10 games at second base, his natural position. He also batted in various positions in the batting order. In general, he was used as a constant Kapler experiment. This would be a nightmare for any player, but Kingery handled it well.

Each year brings changes. The 2020 infield will look entirely different. Cesar Hernandez (second base) and Maikel Franco (third base) have moved on. Didi Gregorius, a Girardi favorite, has signed a one-year contract to play as the new Phillies shortstop, where he will be replacing Jean Segura.

Our contributor Sean Oakes stated the following in his recent piece “The curious case of Jean Segura“:

“That left Segura wondering where he would be playing come the 2020 season. Appearing out of shape last season, Segura picked up the intensity of his off-season workouts. He entered spring training camp in mid-February noticeably slimmer and claimed to have lost 14 pounds.”

Segura was ready and willing to move over to third base. Before spring training was shut down by the coronavirus pandemic he was performing admirably. It appeared that Segura would be the Opening Day third baseman with Kingery manning second base. Of course, now everything is on hold.

Kingery reported to spring training in great shape as well. He appeared to have worked out all winter, adding over 10 pounds of muscle to go from 180 to 192 pounds. Definitely bulked up. Already having doubles his rookie homer production last year, this could help his power numbers reach another level.

Personally, I’m not a fan of Scott Kingery – but I could be. I don’t like all the hype around a player that clearly hasn’t made a huge impact yet. But maybe, just maybe, if he is allowed to concentrate on one position, Kingery can rise to that “as advertised” level. No longer a utility man, he can hopefully hit for a higher average and add more RBIs. A former minor league Gold Glover at the position, he certainly has the ability to be a great defensive second baseman.

At Citizen’s Bank Park, the grass is almost perfect. A beautiful shade of green, expertly groomed. It is waiting patiently for the sound of bats cracking and baseballs popping into gloves. The feel of cleats digging in and runners galloping around the base paths. But now we all have to wait to see it.

Whenever the lineup is finally introduced for the home opener in South Philly, Scott Kingery will be there, probably as the new starting second baseman. He will finally be right where he belongs.