Embed from Getty Images
The Philadelphia Phillies just cannot seem to get on a true roll in this 2019 season. The last time that the club was 10 games above the .500 level was following a 4-1 victory over the Cincinnati Reds at Citizens Bank Park on June 8.
Since that time, the club has gone 22-27, and they have just two winning streaks of three or more games. Beginning on July 30, the Phillies began a streak, one that is still current, in which they have alternated a win with a loss.
Win. Loss. Win. Loss. Win. Loss. Win. Loss. Four times in a row now following Tuesday night’s 8-4 defeat to the Arizona Diamondbacks at Chase Field in Phoenix.
And yet, the Phillies remain in control of a National League Wildcard playoff berth. That position in the standings is thanks to two factors. One has been that all of the other Wildcard contenders have proven to be flawed as well, at least to this point.
Another is that, while not being able to assemble a big winning streak, the Phillies have not gone into a major losing skid either. The club has not lost as many as three in a row since the middle of June. In fact, since the start of July, the Phillies have only dropped back-to-back games on three occasions.
Frankly, this team has become exasperating to many fans. They can’t win consistently, and in fact have outright blown many more than their share of potential victories, continuing to frustrate everyone following the team. But that they also don’t lose consistently has kept them tantalizingly in the race.
Sure, the bullpen has blown a number of games. But if we are honest about that factor, the Phillies pen has been in shambles due to numerous key injuries, far more than could have been expected and planned for.
At present, the following relievers are on the Injured List: David Robertson, Pat Neshek, Seranthony Dominguez, Tommy Hunter, Edubray Ramos, Victor Arano and Adam Morgan.
When the 2019 regular season opened, that was nearly the entire Phillies anticipated bullpen. Most of those relievers have missed most of the season. The problems stemming from trying to replace them on the fly, of leaning too much on arms who could not have been expected to pitch so often in the roles in which they have been used, should be expected. It may be a problem without a solution in the short term.
So, yes, while the bullpen has been a problem, and is likely to remain one for the rest of this season, there are other major contributors to the Phillies struggles. The starting rotation has also struggled, not so much with injuries, but with a failure to produce consistent outings.
But this club was put together in the off-season with an emphasis on upgrading the offensive production. Half of the starting lineup was overhauled with trades and free agent acquisitions. That offense has simply not stepped up and delivered in the way that it was assumed it would.
The Phillies inability to consistently drive in runners when they are in scoring position has been maddening, and it has cost them directly in the win column. It has kept the club’s average runs per game at a mediocre 4.78 mark, ranking them 16th of the 30 teams in Major League Baseball.
Last night in Arizona, the Phillies hitters were a sickening 2-17 with runners in scoring position (RISP) and left a dozen men on base. Even in their 7-3 win the previous night, the club went just 5-19 with RISP, and left nine men on base.
The Phillies average of 3.82 runners left in scoring position per game is the worst in all of baseball. Last year, the Phillies offense ranked seventh in that stat. The only player doing the job in 2019 has been Bryce Harper, whose .368 batting average with runners in scoring position ranks 6th in the National League and 9th in all of Major League Baseball. 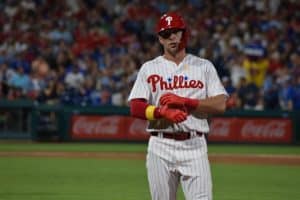 While Rhys Hoskins leads all Phillies in overall rWC+, he needs to be more consistent. (Ian D’Andrea)
Since the MLB All-Star break in the second week of July, the Phillies are now just 44-207 for a .213 batting average as a team with runners in scoring position over the last 22 games. It is almost miraculous that the club has fashioned a winning 12-11 record since the break.
Here is the breakdown from each of those series: CWS: 5-26, SFG: 5-26, ATL: 7-26, DET: 3-19 (two games), PIT: 5-23, LAD: 8-29, WAS: 4-22, and these last two games in Arizona.
That is simply not going to cut it. There is no way that these Phillies will hold on to an NL Wildcard playoff spot, let alone make any kind of run at the division crown, without significant improvement in this area.
The Phillies are no offensive juggernaut, that much is a fact. However, their overall offense is no worse than middle of the pack. They put runners on base for the most part. They put pressure on the opposition. The Phillies should be scoring more runs. They simply do not kick in the door. Not nearly enough.
What is the answer? Pretty simple. The players who are hitting when there is no one on base need to hit when there are men in scoring position. Top to bottom, the Phillies hitters need to come through in the clutch and produce more runs.
In Fangraphs wRC+ (weighted runs created) rankings, Rhys Hoskins is the #24 ranked hitter in all of baseball. Harper comes in next at #62, with Jean Segura at #93 and J.T. Realmuto in the #98 slot. In order to score more, the Phillies are going to need to get more production from the rest of their lineup. And it wouldn’t hurt if Segura and Realmuto picked it up a bit as well. In fact, it’s hard to make the argument that both Hoskins and Harper don’t have a big run in them.
Would another big bat or two help, especially in the middle of the order? Sure. But almost every team can say that. For this 2019 Phillies team, the answer lies on the bats of the players who are already here to begin coming through when it matters on a far more frequent basis.
Originally published at Phillies Nation as “Failure to deliver with RISP is keeping the Phillies from a big win streak“