The Philadelphia Phillies (57-52) got a strong first start from newcomer Jason Vargas, but blew a two-out, two-strike lead, ultimately losing a 4-3 game to the Chicago White Sox (47-60) in 15 innings at Citizens Bank Park.

With the loss, the Phillies will drop one game back of the Cubs and Nationals, who each won, in the National League Wildcard race heading into Saturday action.

The visitors jumped on top first when Cuban-born first baseman Jose Abreu blasted his team-leading 23rd home run of the season deep into the seats in center field. The two-run shot off Vargas in the top of the 3rd inning put Chicago up by 2-0 early on.
The Phillies got one of those right back in the bottom of the frame when Roman Quinn rocketed his third home run of the year, his second in as many days, deep into the right field seats.

Phillies Nation@PhilliesNation
Roman Quinn’s solo shot got the Phillies on the board. 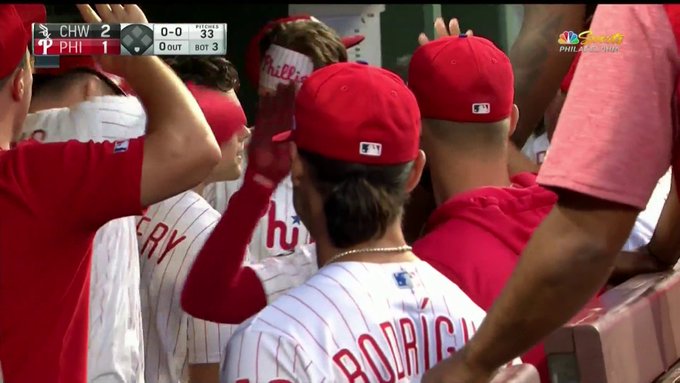 The Phillies finally got the score knotted up with a 6th inning mini-rally. Jean Segura led off with a single to left and Rhys Hoskins drew a walk. That was the end of the night for Chisox starter Ivan Nova, and manager Rick Renteria called on Jace Fry out of his bullpen.

Bryce Harper then grounded what appeared to be a double play ball. The White Sox got Hoskins for the first out, but Harper was hustling all the way, forcing a bad throw from shortstop Tim Anderson. Harper was safe, Segura raced home, and the game was tied at 2-2.
In the bottom of the 7th, another mini-rally produced the go-ahead run for the home side. Quinn beat out a bunt back to new Chicago reliever Aaron Bummer for an infield single. Quinn then promptly stole second base. Cesar Hernandez then chopped one past Bummer for his own infield hit, with Quinn moving over the third base. Segura followed with a base hit to right, and Quinn raced to put the Phillies on top for the first time all night.
Vargas lasted 6.1 solid innings in his debut with the Phillies, who acquired him at the trade deadline from the division-rival New York Mets. The bullpen then did the job at first, with Mike Morin and Nick Pivetta getting them to the top of the 9th with the lead.
Juan Nicasio retired the lead batter in the 9th, but then yielded a double to Eloy Jimenez. He then struck out James McCann, and Kapler decided to go to Jose Alvarez. The lefty gave up a single to Ryan Goins that moved Jimenez to third. Then Alvarez got to two strikes on pinch-hitter Matt Skole. But Skole came through, lining a single to right with Jimenez scoring the tying run.
New bullpen addition Blake Parker shut down Chicago 1-2-3 in the 10th and 11th, striking out four batters. Zach Eflin then shut them down with 1-2-3 frames in the 12th and 13th, striking out two of his own. Meanwhile, Jose Ruiz kept pace by shutting the Phillies offense down in the 10th and 11th innings, striking out three of his own. Carson Fulmer then shut them down in the home 12th and 13th innings.
In the bottom of the 13th, Quinn singled with one out. He was erased when Eflin hit into a force out. Then with two outs, Segura drew a walk, moving the potential winning run to second base. Kapler opted to put the speedier Vince Velasquez in as a pinch-runner for Eflin, but that ended up a wasted move when Hoskins popped out to end the threat.
With all the juggling, it meant that Quinn was forced by Kapler to take the mound as a pitcher. The Phillies got away with it in the top of the 14th thanks to a tremendous throw from Velasquez (?) in left field, who nailed Abreu at the plate.
In the 15th, Quinn retired the first two batters, and then perhaps the inevitable. A base hit, walk, and RBI single from Abreu to score Leury Garcia gave Chicago a 4-3 lead. Josh Osich set the Phillies down in order in the bottom of the 15th, and this long, ugly ball game for the home team was brought to an unmerciful end.

The White Sox won, and got a home run and the game-winning RBI from Abreu. But Quinn, hitting out of the #9 spot in manager Gabe Kapler‘s order, was in the middle of the Phillies limited offense all night long. He delivered three hits including a home run that put the Phillies on the board, stole a base and scored what looked to be their winning run for awhile, and then pitched two innings, nearly getting away with the mound appearance before finally cracking with two outs in the 15th.