The Philadelphia Phillies (39-38) and New York Mets (37-41) both entered the 2019 season with high hopes. Each team was considered by most evaluators to be a genuine contender for a division crown and a postseason berth. Neither has seen their season play out as they would have hoped to this point.

The Phillies situation is well known by now to the frustrated and nearly mutinous fan base. The Phillies were 33-22 and riding high in first place in the division on May 29. They have gone just 6-16 since that time, and just three and a half weeks later are on a seven-game losing streak and have fallen out of even an NL Wildcard spot.

For the Mets, injuries and inconsistencies, their usual two bugaboos, have ganged up to derail what was their own promising start to the 2019 season. On April 24, nearly a month into the season, they were in first place following a 9-0 white-washing of the Phillies. But they went 13-15 in May, and are now 9-12 in June to this point.
The Mets have now lost star pitcher Noah Syndergaard to the IL for at least a couple of weeks. With Jacob deGrom not scheduled to pitch in this series, the Phillies hitters should feel fortunate to be missing their two best starters. However, as inconsistent as they have been performing of late, anyone appears capable of shutting down the Phillies bats.
Following this series, the Phillies will head out on the road for nine games within the division, three each in Miami, Atlanta, and New York. To say they are desperate at this point would be an understatement. The Phillies really need to win this series with the Mets in order to head out on the road feeling better about themselves and their chances of turning things around.

Our division rivals from New York are in town for four games at Citizens Bank Park. 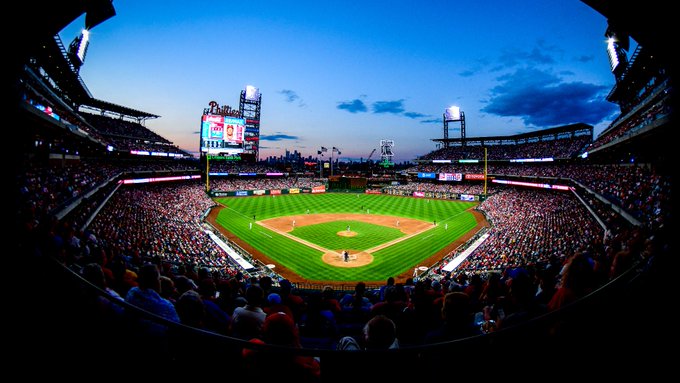 102 people are talking about this

Robinson Cano: The 36-year-old former superstar has not been anything like what the Mets hoped when they swung a big off-season trade with the Seattle Mariners, taking on Cano’s massive contract that still owes him $96 million more over the next four years.
An 8x American League All-Star who has two Gold Gloves and five Silver Sluggers in his trophy case mostly from his play with the Yankees in the prior decade, Cano won a World Series with the Bronx Bombers, helping defeat the Phillies back in the 2009 Fall Classic.
Cano is slashing just .228/.276/371 in 210 plate appearances. He has produced just four homers and 20 extra-base hits, scoring 18 runs and driving in 16, for the $24 million that the Mets are paying him this year. He seems to wake up against the Phillies, however. Cano has gone 7-15 (.467) in six games between the two NL East rivals this year.

To say that Mickey Callaway is under fire might be an understatement. Callaway is now in his second season at the helm with the Mets and has a cumulative 114-126 record to date.
In his playing days, Callaway was a right-handed pitcher who appeared in parts of five big-league seasons, making 20 starts and 20 relief appearances spread across three organizations between 199-2004.
Callaway recently had what can only be described as a full meltdown during an incident involving a New York reporter. Per Brian Fonseca of NJ.com, Callaway allegedly cursed out the reporter, Tim Healey of Newsday, and had him removed from the locker room following his postgame press conference on Sunday after Healey questioned his use of the bullpen:
“Callaway, wearing a black shirt, emerged from his office and walked past a reporter, who told him “see you tomorrow, Mickey.”
Callaway, still on edge from the loss, turned around and yell “Don’t be a smarta–, motherf—–.”
He later returned and engaged the reporter about the comment, which was not made maliciously, and Callaway raised his voice while he hurled expletives, telling a team public relations official to remove the reporter.
“Get the f—– out of here,” Callaway said. “We don’t need that s— here.”

Monday will be a partly cloudy, warm and humid evening with temps mid-80’s and light winds and only a low chance or rain. Tuesday and Wednesday are more of the same, except a bit more sun and a little less humid. All-in-all it will be good typical summer-time baseball weather. Report from The Weather Channel forecast.
Originally published at Phillies Nation as “Phillies series opposition preview: New York Mets“