The Philadelphia Phillies (37-29) are no longer all alone in first place in the National League East Division standings. After being crushed by a 13-8 score on Monday night by the visiting Arizona Diamondbacks (35-32) at Citizens Bank Park, the Phillies now find themselves tied at the top with the Atlanta Braves.

This marks the first time since April 25 that the Phillies were not at the top of the division by themselves. The Braves crushed the Pittsburgh Pirates tonight in Atlanta by 13-7 to earn the tie. It was a fourth consecutive win for the Braves, the fifth win in a row for the Dbacks, and the Phillies second straight loss.
The Phillies and Braves are set to meet this coming weekend down in Atlanta in a key mid-season series, the first meeting between the clubs since the Phillies swept the Braves in the first series of the season back in late March.
The vast majority of the 21 runs scored by the two teams came via the long ball. The two clubs combined for a Major League Baseball record 13 home runs in this contest. Unfortunately for the home side and their fans, most of those were slugged by the visitors.
Arizona jumped all over Phillies starter Jerad Eickhoff (3-4) about as hard as you can jump on a pitcher. The Dbacks first three batters – Jarrod Dyson, Ketel Marte and David Peralta – all homered.
Credit Eickhoff in the immediate aftermath of that potentially demoralizing opening. He settled down to retire the next nine straight Arizona batters as the Phillies slowly fought back with solo runs in each of their first three at-bats to get back to even.
Jean Segura‘s sixth home run of the season got the Phillies on the board in the home 1st inning. In the 2nd, Scott Kingery ripped a one-out triple and scored on a ground out by Maikel Franco to make it 3-2. They tied it up in the 3rd when Rhys Hoskins singled home Segura, who had reached on a fielder’s choice and stole second base. 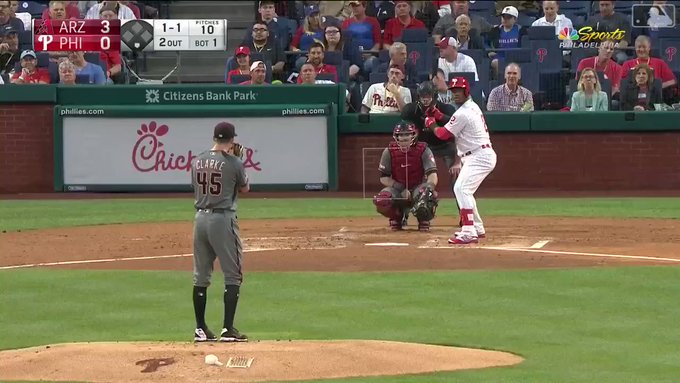 Phillies Nation@PhilliesNation
Jean Segura’s solo blast has the Phillies down just 3-1 as we head to the bottom of the 2nd inning.

See Phillies Nation’s other Tweets
Twitter Ads info and privacy
That tied didn’t last long, as the Diamondbacks blew the game open by scoring eight times over the next three frames. Eduard Escobar and Alex Avila each blasted two-run homers in the top of the 4th to give Arizona back the lead at 7-3.
After Kingery drilled his fifth home run of the season out to right field in the bottom of that inning to cut the deficit to 7-4, Arizona answered with three more runs thanks to two more long balls. Escobar blasted his second of the game and 17th of the season, and then Ildemar Vargas ripped his third of the year.
In the top of the 6th, the Eduardo Escobar show continued. He roped an RBI double to give him five ribbies on the night, and the Dbacks had an 11-4 lead.
The Phillies had one positive on this night, and that was the performance of Kingery. In the bottom of the 8th he homered again, his second of the night and sixth of the season, to make it an 11-5 ball game. Later in the frame, Nick Williams doubled and scored on a base hit from Bryce Harper, making it 11-6. 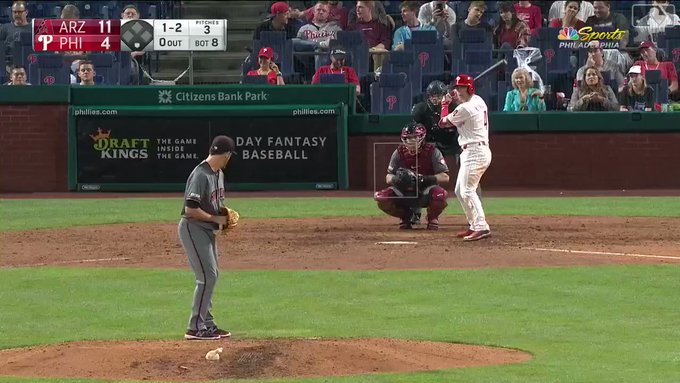 Phillies Nation@PhilliesNation
Second homer of the night for Kingery, who has been the lone bright spot tonight for the Phillies.

See Phillies Nation’s other Tweets
Twitter Ads info and privacy
But the Dbacks relentless offense still was not finished. In the top of the 9th inning, Vargas crushed his own second homer of the night to push Arizona’s lead back out to 13-6. He thus became the third player, joining his teammate Escobar and the Phillies’ Kingery, to homer twice in this one.
Even with that big lead, Dbacks skipper Torey Lovullo brought in his closer, Greg Holland, to wrap this one up. Hoskins greeted Holland by driving the 14th home run of the season by the first baseman out over the left field wall to make it a 13-7 game.
Two batters later, Jay Bruce roped his 19th homer of the year, his fifth in seven games since joining the Phillies in a trade from Seattle last week. It was just announced earlier today that Bruce had been named as the NL Player of the Week honoree for his hot debut with the club last week. 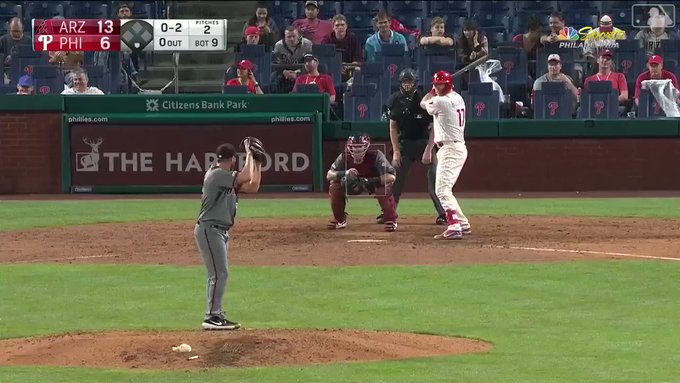 Phillies Nation@PhilliesNation
The Phillies got homers from Hoskins and Bruce in the 9th inning, but it was too little, too late.

See Phillies Nation’s other Tweets
Twitter Ads info and privacy
That was finally the end of the scoring on this night. 13 home runs in all went over the walls of Citizens Bank Park. Unfortunately, most of those came off the bats of the visitors as Arizona wrapped up a 13-8 victory.
With their hold on sole possession of first place in the division gone and the Braves playing good baseball, the pressure on the Phillies has now increased. They have not gone on a truly extended winning run all season long. If there was ever a time to get one started, it would be now. These two teams will meet again on Tuesday night at Citizens Bank Park, when Jake Arrieta will try to regain his April mojo.

The Dbacks third baseman went 4-5 with two homers, a double and a single, driving in five runs and scoring three times. Escobar raised his average to the .299 level, and his 17 home runs and 54 RBIs both lead the Arizona lineup.