Adam Haseley suddenly finds himself starting for Phillies, ready or not

Series of unfortunate circumstances propel Haseley to the bigs

There has been no official announcement from manager Gabe Kapler, general manager Matt Klentak, or anyone else in the Philadelphia Phillies organization.

But there is no other way to look at the present situation regarding the Phillies injury-depleted outfield. Against all odds, Adam Haseley has become the starting center fielder for a Philadelphia Phillies team that still hopes to contend for a National League East Division crown.
The center field position has been in flux for weeks. The year opened with Odubel Herrera beginning what appeared to be his fifth season as the everyday starter. At just 27 years old and with a contract that runs at least through the 2021 campaign, and with no other healthy candidates appearing ready in the organization, Herrera’s job appeared as secure as any on the team.
However, Herrera came up injured on April 17, just 17 games into the 2019 season. At that exact same time, the perennially injured Roman Quinn was ready to return to the team. Quinn immediately was inserted into the lineup in Herrera’s place.
As most anyone who has followed the team over the last few years could have predicted, Quinn didn’t last long. After just seven games, he came up injured once again. Scott Kingery, the super-utility player who the team believed was also capable of covering center field, also came down with his own injury issues.
This began a nearly two-week period in which the position was in flux. Andrew McCutchen was moved over from left field to cover center field most days. The problem there was that it left a hole in left field. Aaron Altherr‘s game had completely fallen apart, to the point where he was released. Nick Williams wasn’t hitting at all, and would eventually find himself shipped back to Triple-A.
Herrera finally returned from the Injured List on May 4, but he did not produce. Over 22 games and 70 plate appearances during the month of May, Herrera slashed just .175/.257/.302 with no homers, nine RBIs, and five runs scored. He was proving a black hole in the batting order.
And then it really began to completely unravel. Just over a week ago as the club returned home from a tough road trip, Herrera was arrested following a domestic assault incident at an Atlantic City casino hotel. He is now being investigated by Major League Baseball, and his career with the Phillies may be over. 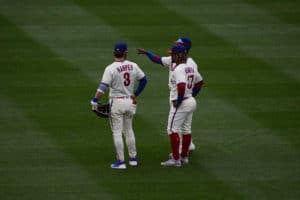 Both Herrera and McCutchen have been lost for different reasons, leaving Harper as the lone Opening Day starter left standing. (Ian D’Andrea)
McCutchen and Kingery, who had finally returned from the IL himself, had been covering center field since that time. Just two days ago, the Phillies completed a trade with the Seattle Mariners, obtaining veteran left-handed power bat Jay Bruce. The plan was to have Bruce as a power lefty bat off the bench, but also to play him in left field against tough right-handers, with McCutchen covering center field and Kingery returning to his super-utility role.
As the old saying goes, the best laid plans often go awry. That seems to be especially the case with the 2019 Philadelphia Phillies. During a crazy rundown play in Monday night’s series opener out in San Diego, McCutchen came up injured as well, clutching at his knee and needing assistance to limp off the field.
McCutchen will undergo an MRI today in order to assess the damage, but he will be out for at least a short period of time. There is a chance that he could be out much longer, even that his season could be over.
McCutchen. Herrera. Quinn. Altherr. Williams. All either injured or failing to produce. And there are only so many players out there available at this point in the season on the trade market. Besides, the Phillies still have other needs to fill if they really want to contend.
So, into the crucible of a five-game losing streak and an injury-ravaged position steps the rookie Haseley. The 23-year-old from Orlando, Florida was the Phillies first round draft pick at eighth overall in the 2017 MLB Amateur Draft out of the University of Virginia.
He opened the season as part of a “First-Round Outfield” at Double-A Reading, playing alongside the club’s 2015 first rounder Cornelius Randolph and 2016 first rounder Mickey Moniak.
After slashing .268/.356/.471 with seven homers, 19 RBIs, 27 runs scored, and four stolen bases, Haseley was promoted to Triple-A Lehigh Valley just a week ago. Over six games with the IronPigs, Haseley slashed .320/.370/.440 with three doubles and four RBIs.
Tim Pearrell at Richmond.com quoted Haseley just about two weeks ago on making adjustments to the skill level of pitching at the higher levels of the minors:
“A lot of it is all these guys throw so hard, you don’t really have to go up there and swing 110 percent. Just being aware of that, taking advantage of some counts where you can take that risk, it works out.”
That is a great attitude and strategy, one that Haseley will have to carry with him when he steps to the plate in a Phillies uniform to face the even better pitching at the MLB level.
Ideally he would not be here. He would not wear Phillies red pinstripes until September under normal circumstances. He probably needs a couple of hundred plate appearances, at least, against higher-level pitching at that Triple-A level.
But the situation in Philly is not ideal. Far from it. And now the young man who was patrolling a college outfield in Virginia just two springs ago finds himself in the big-leagues. He has the talent to play at this level. But it was situations involving a half-dozen players completely outside of his control that put him here at this time.
Now that they have promoted him, the Phillies have to play him. You cannot sit a 23-year-old top prospect on the bench and let him rot away. If Kapler doesn’t like what he sees, or simply doesn’t have the confidence to actually play him regularly, then Haseley won’t last long.
This is obviously not the long-term answer. Haseley starting in center field. Bruce starting most days in left field. But that is where the Phillies appear to find themselves for the immediate future. Counting on two players who were nowhere in their plans just days ago as their division lead fritters away.
Originally published at Phillies Nation as “Against all odds, Adam Haseley becomes the Phillies starting center fielder“