The Los Angeles Dodgers (40-19) got a walk-off homer from rookie catcher Will Smith on a 3-2 pitch with one out in the bottom of the 9th inning to beat the Philadelphia Phillies (33-25) by a 4-3 score on Saturday night at Dodger Stadium.

With the loss, the Phillies lead in the NL East Division standings shrinks to two games over the Atlanta Braves and 4.5 over the New York Mets, each of whom won earlier in the day.
Phillies skipper Gabe Kapler had few good traditional options as his starting pitcher for this one after Zach Eflin came up injured, so he chose to go with “The Opener”, using lefty reliever Jose Alvarez at the start. Alvarez would do the job, holding the Dodgers off the scoreboard over the first two innings.
Alvarez gave way to Juan Nicasio, who retired the lone batter he faced in the bottom of the 3rd inning before giving way himself to lefty Cole Irvin. Kapler hoped to get from between 3-4 innings out of the rookie.
The hosts got on the board first, this time scoring a run off Irvin, whom Kapler had brought in strategically with a couple of big left-handed bats due up. The rookie southpaw allowed a base hit to Max Muncy with one out, then walked Cody Bellinger with two outs to foil that lefty-on-lefty strategery. When Enrique Hernandez grounded a single up the middle, Muncy rolled home with the first run of the game.
The Phillies got back to even in the top of the 4th when Bryce Harper lined a one-out single, moved up to second base on a wild pitch by Dodgers starter Clayton Kershaw, went to third when Muncy couldn’t handle a slow roller by Rhys Hoskins that went for an error, and then scored on a base hit by J.T. Realmuto.
David Freese led off the bottom of the 5th with a solo home run off Irvin, his 5th of the season, to put the Dodgers back out in front by a 2-1 score. Then in the home 7th, they scored what appeared to be a huge insurance run.
Kapler made a change from Irvin to Vince Velasquez. Irvin had surrendered two runs, but gave the Phillies 3.2 innings and kept them in the game. He struck out five Dodgers batters, including the last four that he faced.
Velasquez started out strong, striking out Smith as the leadoff man in the bottom of the 7th. Matt Beaty, hitting for Kershaw, then reached on a swinging-bunt single and moved to second on a walk to Joc Pederson. Beaty then went to third when Velasquez tried to pick him off and bounced one into the outfield, and then scored on a sac fly by Muncy.
Though the Phillies offense was largely lifeless to that point in the game, they had finally gotten Kershaw out. That would prove a key. With one out, Andrew McCutchen was hit by a pitch from new hurler Julio Urias.
That brought Bryce Harper to the plate for a lefty-on-lefty matchup. Every Phillies fan knows that Harper hits southpaws well, and he did just that here, drilling an opposite-field home run to tie the game up at 3-3. 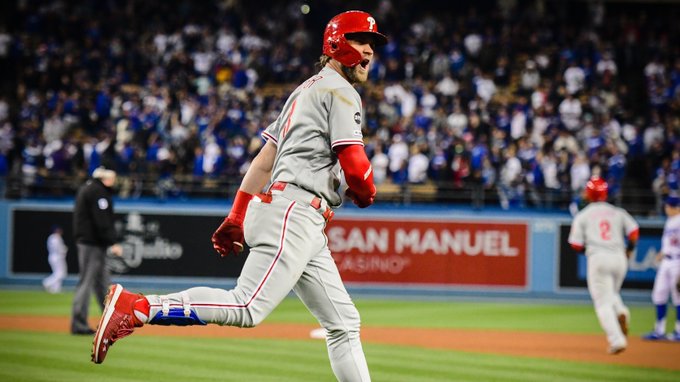 456 people are talking about this
Twitter Ads info and privacy
The two teams moved into the 9th inning still tied, and Urias set down the Phillies, giving his club a chance to win a game in which he had blown a lead. They would indeed get him off the hook.
In the bottom of that 9th inning, Kapler went to his closer, Hector Neris. The big right-hander got the first batter, Alex Verdugo, to ground out to second. Then up stepped Will Smith, who had struck out swinging in his previous two at-bats in this game.
The count went full, and then Neris came in with an 86 mph splitter. Smith jumped all over the pitch, blasting it out high over the left field wall, the no-doubter walking the game off in favor of the home team.
Smith was quoted by Bill Plunkett of the Orange County Register after his first big-league home run had proven to be a game-winner: “That was awesome. I mean, that was the first walkoff I’ve ever had, first home run in the big leagues — couldn’t ask for a bigger stage or a bigger moment. I’ll remember that forever.” 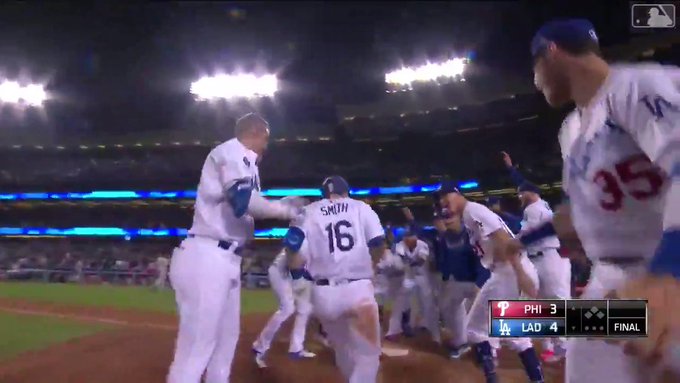 4,699 people are talking about this
Twitter Ads info and privacy
With this victory the Dodgers clinch a winning series. The Phillies will try to salvage one game here in Los Angeles on Sunday afternoon with Nick Pivetta on the mound against veteran lefty Rich Hill for the Dodgers.

PHILLIES NUGGETS PLAYER OF THE GAME: WILL SMITH

You would have had a hard time convincing me that Smith was going to end up as the Player of the Game on this night. He was intentionally walked in his first plate appearance, and then looked over-matched in striking out swinging over his next two against Irvin and Velasquez. But he put a beautiful swing on the 3-2 offering from Neris to become the walk-off hero. 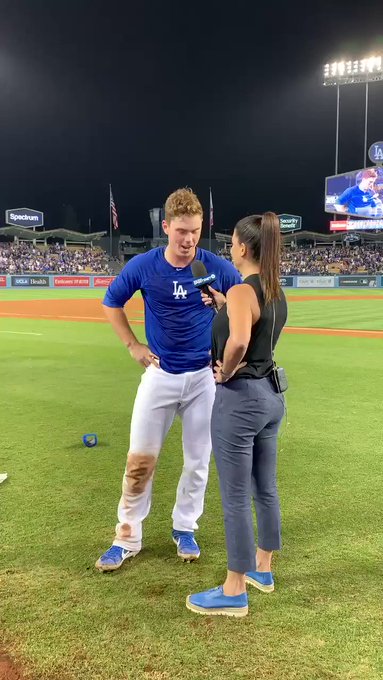 Originally published at Phillies Nation as “Will Smith gets jiggy wit it, walks off Phillies with 9th inning homer“