For the second straight series, Citizens Bank Park has been part of the introductory process to Major League Baseball for the top prospect of the Philadelphia Phillies opposition.

Earlier in the week, top Milwaukee Brewers prospect Keston Hiura made his big-league debut. The 22-year-old second baseman was the Brewers’ first round selection at ninth overall in the 2017 MLB Amateur Draft out of the University of California-Irvine.
Hiura went just 2-12 over his first three games, with both hits coming in his first start on Tuesday night. But all the California native has ever done is hit, wherever he has played. He was tearing up the Triple-A Pacific Coast League to the tune of a .333/.408/.698 slash line with 11 homers, 24 extra-base hits, 26 RBIs, and 23 runs scored prior to his promotion.
Last night in South Philly it was the visiting Colorado Rockies turn to break in their top prospect. Like Hiura, Brendan Rodgers is also an infielder who was their first round choice, going at third overall in the 2015 MLB Amateur Draft out of a Florida high school.
Also like Hiura, Rodgers had been tearing his way through the Pacific Coast League when he got the call. He was slashing .356/.421/.644 at Albuquerque with 20 extra-base hits, nine homers, 21 RBIs, and 34 runs scored. 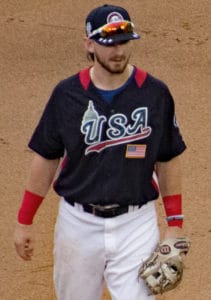 Rodgers made his big-league debut with the Rockies on Friday night at Citizens Bank Park. (David B. King)
A natural shortstop, Rodgers is expected to play mostly second base in Colorado, the position at which he debuted last night. That is due to the presence of All-Star shortstop Trevor Story already in the lineup for manager Bud Black.
Watching talented young hitters such as this make their entry into the big-leagues, Phillies fans have begun to wonder, where is ours? When will a legitimate top young hitter again come out of the Phillies minor league system and establish himself as a force in Major League Baseball?

In recent years we have seen just one. Rhys Hoskins was 24-years-old when he debuted in August 2017. Since that time, Hoskins has developed into a legitimate star. He is the cleanup hitter for a first-place Phillies team, leading the club with 11 home runs, 36 RBIs, and 21 extra-base hits while slashing .273/396/.558 against big-league pitching.
The last great Phillies team developed a host of home-grown talents who would eventually grow into a World Series championship team. That group included a position-player core made up of Jimmy Rollins, Chase Utley, Ryan Howard, and Carlos Ruiz.
The Phillies have become a contender this year in large part thanks to the front office going out and obtaining talented, proven veterans who became stars in other organizations such as Bryce Harper, Andrew McCutchen, Jean Segura, J.T. Realmuto, and Jake Arrieta.
Getting the next young, talented, home-grown hitter into the Phillies lineup as a legitimate force, ala Hoskins, would be huge for this team. It would add impact talent at a minimal cost for years to come. But does the organization have such a player nearly ready to contribute?
In five of the last six drafts, the Phillies have selected a hitter. The lone exception was the one player who has already impacted the team, pitcher Aaron Nola, who was taken at seventh overall in the 2014 draft process. 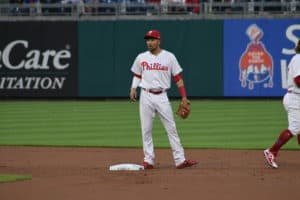 Former top prospect J.P. Crawford played in 78 games with the Phillies over parts of the 2017-18 seasons. (Ian D’Andrea)
None of the five hitters chosen has made a true impact with the Phillies as yet. Shortstop J.P. Crawford was taken at 16th overall in 2013. He was the club’s top prospect for a number of years but never impressed, finally being dealt away to Seattle this past winter as part of the deal to bring in Segura.
Three of the others were outfielders chose among the top ten players in the draft. Cornelius Randolph (10th overall 2015), Mickey Moniak (1st overall – 2016) and Adam Haseley (8th overall – 2018) are all still trying to establish themselves in the minor leagues. None appears close to pushing their way into the Phillies plans at this point.
However, that next great, young Phillies hitter may indeed be out there on the not-too-distant horizon. Last year’s top draft pick, 22-year-old third baseman Alec Bohm, is tearing up the lower levels of the minor leagues.
Bohm is slashing .343/.405/.552 across Low-A Lakewood and High-A Clearwater so far this spring. He has 19 extra-base hits and 23 runs scored and is the consensus top prospect in the organization.
The Phillies were never really worried about Bohm’s ability to hit. The more important concern has been whether or not the big 6’5″ masher could remain at the hot corner as he developed. While he may never be a Gold Glover, he appears to be progressing well on defense.
Organizational infield coordinator Chris Truby made the following observations back in November per Jim Salisbury for Baseball America:
“Alec has an awesome mentality. He wants to be a third baseman…he came in with a little chip on his shoulder to prove to people that he could be a third baseman and he’s putting in the work and time and doing everything in his power to make that happen. I don’t know that he’s ever taken defense as seriously as he is now. He has made tremendous strides since Day One to the end of instructional league. We all know and see he’s going to hit. He’s taking this defense thing personally. He wants to be a total player.”
“He’s moving better laterally and he’s quicker over there,” said Charlie Manuel, the manager of that 2008 Phillies championship team, per Salisbury.
Bohm is the same age as Hiura and Rodgers, which is not to say that he needs to get to Philadelphia this year. However, if he continues to rake at his current levels and is playing solid defense, there is no reason that fans of the Double-A Reading club shouldn’t expect to see him this summer.
Maikel Franco and Cesar Hernandez, two stalwarts of the losing years over the last handful of seasons with the Phillies, are squarely on notice. Bohm with Franco and Scott Kingery with Hernandez are clearly developing into the future of the third and second base positions with the team.
That is who you are most likely to find becoming the next impact young hitters in the Phillies lineup. Kingery should be able to force his way out of his current super-utility role and into the starting lineup by 2020 at the latest. And Bohm will be right behind him, likely making his big-league debut some time next season.
Originally published at Phillies Nation as “As another debuts against them, Phillies look to develop their own next top prospect bat“