The Philadelphia Phillies (22-16) received a masterpiece from starting pitcher Zach Eflin, who completely shut down the host Kansas City Royals (14-26) by 7-0 at Kauffman Stadium on Saturday night.

Eflin tossed a complete game, his second in three starts, and his fourth Quality Start of the season. The right-hander allowed just four hits, striking out seven and walking no one in raising his record to 5-3. He tossed 110 pitches, 76 for strikes.
The complete game shutout was the first by a Phillies pitcher since Jeremy Hellickson tossed one against the Miami Marlins at Citizens Bank Park back on September 17, 2016.
That same year, Eflin tossed a pair of complete games as a rookie. It had been the most recent time that a Phillies hurler threw more than one complete game in a season.
The Phillies offense scored in four different frames. It began with a two-run single off the bat of Rhys Hoskins scored Andrew Knapp and Andrew McCutchen in the top of the 3rd inning. A passed ball charged to Royals catcher Martin Maldonado allowed Jean Segura to score a third run in that inning.
In the top of the 4th inning, Odubel Herrera led off with a double and Cesar Hernandez was hit by a pitch from Royals starter Brad Keller. With one out, Knapp drew a walk to load the bases. McCutchen then grounded to third baseman Hunter Dozier who threw the ball away as Herrera raced home with the Phillies fourth run. 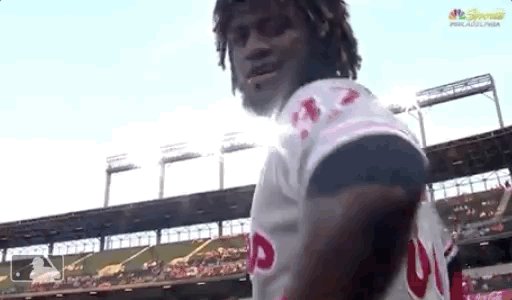 Odúbel scores on an error, and it’s 4-0 good guys!

78 people are talking about this
Twitter Ads info and privacy
Herrera got things started again in the top of the 6th inning when he lead off with a triple off Keller. After the Royals starter followed that up by walking Hernandez the right-hander was lifted by manager Ned Yost, who brought in Glenn Sparkman in relief.
Maikel Franco greeted Sparkman with an RBI single to score Herrera and it was a 5-0 Phillies lead. One out later, McCutchen produced his second RBI ground out of the night to score Hernandez and make it a 6-0 game.
The Phillies wrapped the scoring when Hernandez delivered a two-out RBI single to score Bryce Harper in the top of the 9th inning. All that was left was to see if Eflin could complete his masterpiece. He retired the first two batters but then surrendered a double to Alex Gordon, who had homered twice last night. But Eflin bore down and struck out Dozier to end it.
The two clubs will play the rubber game of this Interleague series on Sunday afternoon. The weather is expected to be unsettled in Kansas City, but they should be able to get in the game. The Phillies will be trying to win their fourth series in their last five, with the other ending as a two-game split with Detroit.

The Phillies starting pitcher threw a masterpiece. It was his third consecutive strong start. He tossed a complete game to beat the Miami Marlins on April 28, then went seven innings in downing the Washington Nationals on May 5, both at Citizens Bank Park.
This was Eflin’s first road victory since he downed the Nats in his first start of the season back on April 2 at Washington. Over the last three outings he has allowed just 15 hits across 25 innings with a 15/2 K:BB ratio.