The Detroit Tigers (13-14) came into Citizens Bank Park and escaped with a 3-1 victory over the Philadelphia Phillies (16-13) on what was an extremely frustrating Tuesday night for the hosts.

On a night when the Tigers starting pitcher kept handing them scoring chances, the Phillies just couldn’t make him pay.
The host Phillies broke through first by scoring in the bottom of the 1st inning. Andrew McCutchen led off with a base hit off the glove of Tigers second baseman Ronny Rogers. A wild pitch by Detroit starter Spencer Turnbull and a ground out by Bryce Harper move McCutchen to third base.
Then with two outs, Rhys Hoskins beat out an infield single to Rogers, scoring McCutchen. Rogers threw the ball away on the play, allowing Hoskins to reach second, but he was stranded there when Turnbull struck out J.T. Realmuto.
In the top of the 3rd inning the Tigers put up a crooked number, partially thanks to some shoddy defense. After Phillies starting pitcher Vince Velasquez struck out Jeimer Candelario to start the inning, Nick Castellanos lifted a pop-up that second baseman Cesar Hernandez didn’t handle. Castellanos rolled to second base with a double on the play.
Miguel Cabrera cashed in when he followed that up with an RBI single. Niko Goodrum then drove his third home run of the season out to right field to give the Tigers a 3-1 lead. It would ultimately prove to be the difference in this ball game.
Velasquez struggled with his command all night in what was by far his worst outing of the season. The right-hander would be pulled with two out in the 4th inning after throwing 99 pitches and walking three batters.
A parade of relievers would keep the Tigers off the board the rest of the way: Edubray Ramos, Juan Nicasio, Seranthony Dominguez, Adam Morgan and Hector Neris combined to allow just one hit and one walk over the final 5.1 innings. They gave the Phillies offense a chance to come back, but that offense continually failed.
For Morgan it was his 15th consecutive appearance without allowing a run to tie the Phillies franchise record. It has been done previously three other times: Ed Roebuck (1964), Rheal Cormier (2006) and J.C. Romero during the 2008 championship season. Should Morgan hold a team scoreless in his next outing the record would be his alone. 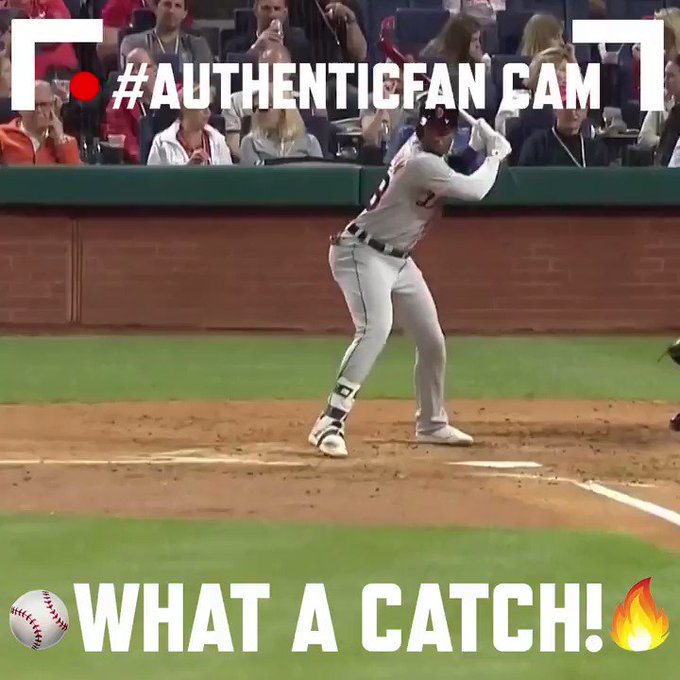 No glove?
No problem.

See NBC Sports Philadelphia’s other Tweets
Twitter Ads info and privacy
Turnbull would shut the Phillies down over six innings, allowing just three hits with two walks while striking out five batters. He was followed to the mound by relievers Victor Alcantara and Joe Jimenez, who kept it the lead at 3-1 into the 9th inning.
Tigers manager Ron Gardenhire brought in his top reliever, closer Shane Greene, for the bottom of the 9th inning. Greene came into the game as one of the top closers in the game this season with 11 saves and a 1.38 ERA over his first 13 games.
Realmuto greeted Greene with a base hit to start the frame. But the Detroit closer then struck out Williams, Hernandez and Franco to end the ball game. It was yet another frustrating night for a Phillies offense that began the year on fire, but has noticeably cooled off in recent weeks.

Turnbull kept the Phillies off the board after the 1st inning and allowed just 3 hits over 6 innings. However, he also walked two, threw three wild pitches, and hit two batters. The Phillies just never made him pay for all of the base runners.
It was Goodrum’s home run that stood up and proved the difference in this one. He was 1-3 with a walk, a run scored, and two RBIs.