It has happened 184 times over his first seven regular seasons in Major League Baseball and another five times in the postseason. There were even a few launched during spring training. But all of those happened in another uniform.

This afternoon for the first time as a member of the Philadelphia Phillies, Bryce Harper enjoyed the feeling of blasting a home run. In fact, he enjoyed it so much that he decided to do it again, crushing a sixth-inning blast as well.
The first came during his first plate appearance of the afternoon at Spectrum Field in Clearwater, Florida with one out and Andrew McCutchen at first base.
As Harper walked to the plate in the bottom of the 1st inning, Phillies announcer Ben Davis told his broadcasting partner Gregg Murphy that “he is a tick away” and noted that Harper had “a few really, really good swings yesterday” in one of the more prescient calls of the former catcher’s career as a color analyst.
Harper wasted little time. Toronto Blue Jays pitcher Sam Gaviglio tried to groove an 88 mph fastball for strike one, and the Phillies right fielder unloaded, ripping the ball out and over the right field wall.
The home crowd roared and rose to their feet as the ball sailed out. They remained on their feet as Harper rounded the bases for the first time as a member of the ball club that he will call his baseball home for the rest of his career.
After celebrating with a high-five at home plate with McCutchen, Harper trotted back to the home dugout and acknowledged the roaring fans behind home plate with a wave.
Harper’s blast touched off a massive Phillies power display on the day which would result in a 13-6 victory. In addition to Harper’s pair, other Phillies long balls on the day came off the bats of McCutchen, Gift Ngoepe, and one from each of the club’s two catchers, J.T. Realmuto and Andrew Knapp. 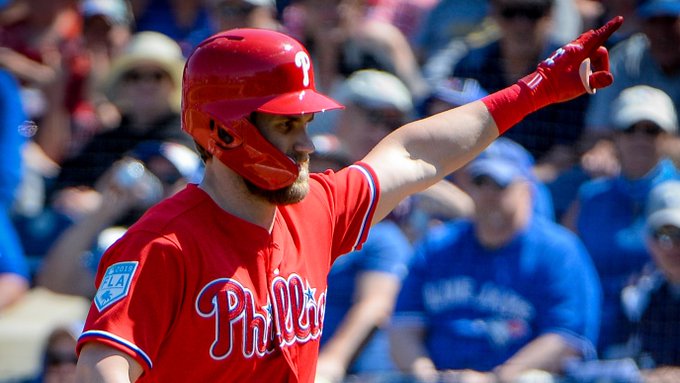 631 people are talking about this
Twitter Ads info and privacy
In the bottom of the 6th, young left-hander Thomas Pannone backed Harper off the plate with a 1-1 curve ball. Undeterred, Harper stepped right back in and crushed a 91 mph fastball way out over the back fence in right-center field.
It was a week ago tomorrow against these same Toronto Blue Jays that a fastball to the ankle had everyone fearing for Harper’s season. One week from today the Phillies will open that 2019 regular season at Citizens Bank Park against the Atlanta Braves. I think we can say after today’s performance that Harper will be there and will be ready to go.
Originally published at Phillies Nation as “Bryce Harper rips first home runs in a Philadelphia Phillies uniform“