Phillies have used 11 center fielders in this Graperfuit League season

The announced starting lineup for the Philadelphia Phillies for the Saturday afternoon March 16 game at Spectrum Field in Clearwater, Florida against the visiting Houston Astros included 24-year-old Dylan Cozens in center field.

The start for Cozens is his second of spring training in center field, the last coming back on March 6 in Dunedin against the host Toronto Blue Jays.
For these tune-up games down in Florida the Phillies have utilized 11 different players at the crucial center field position. None of them has been named Odubel Herrera. The starter at the position for the last four years has been sidelined by injury. He will make his first start today, serving as the Designated Hitter.
Herrera had entered the spring in a head-to-head competition for the starting center field job with 25-year-old Roman Quinn. However, the speedy Quinn suffered yet another in a series of injuries which have repeatedly set his career back. He got to make just one start, in the Grapefruit League opener against the Tampa Bay Rays.
With both Herrera and Quinn out of commission the Phillies have leaned heavily on three players. Aaron Altherr has received nine starts in center and is the only player to start out there on back-to-back days, having done so on both February 27th and 28th.
The other two players who have seen stead action in center field are a pair of prospects. 22-year-old Adam Haseley has made four starts and come on as a substitute in three others. 20-year-old Mickey Moniak made one start and came on as a sub a half-dozen times.
Haseley is one of just two who have played a full game in center field all spring. He did so for the split-squad game on the road against the Detroit Tigers on March 7.
The other player to go a full game in center was Lane Adams. The 29-year-old who has three years of big-league experience is here as a non-roster invitee. He also played a full split-squad road game, that one on March 14 against the Pittsburgh Pirates. That was Adams lone start. He has also appeared in three more games out in center as a substitute. 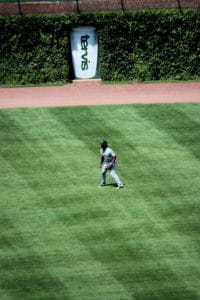 McCutchen was a center field fixture and former Gold Glover with Pittsburgh but did not play the position at all in 2018. (TonyTheTiger/WikiCommons)
Andrew McCutchen (2) and Scott Kingery (3) have made the remaining starts out in center field thus far for the Phillies. Veteran non-roster invitee Shane Robinson has come on as a substitute three times while prospects Matt Vierling and Simon Muzziotti have done so twice each.
Quinn began running again this past week as he begins to recover from an oblique strain. The Phillies are likely to be cautious with him. You can probably expect that Quinn will begin the season on the Injured List or at extended spring training.
Assuming that Herrera has no setbacks in his recovery from a hamstring strain, he is likely to begin seeing the bulk of the starts in center field in preparation for the March 28 regular season opener. As long as he can continue to get regular plate appearances from this point, fans should expect to see him on Opening Day.
The injuries to Herrera and Quinn combined with Friday’s loss, at least temporarily, of right fielder Bryce Harper are opening up playing time opportunities others. Altherr, Kingery and Cozens would likely become the primary options if any or all of those injuries linger into or re-surface during the early parts of the regular season.
Fans have wondered about giving Nick Williams, who made 16 appearances back in 2017 out in center field, some of the playing time there. Phillies coaches have evaluated Williams now for more than three years, and the decision has been made that he is not an acceptable option at the position. Perhaps that would change in an absolute emergency where multiple others were injured, but for now he will remain as only a corner outfielder.
Harper has played 184 games during his career in center field, 63 of those just last year. He is certainly athletic enough to slide over in an emergency as well but is already on record as saying that right field is by far his best and most comfortable position. Early last week, Harper was quoted by Corey Seidman of NBC Sports Philadelphia:
“I know I was terrible last year in center field. I feel like if I can stay out of center field, that’d be great. Wherever they need me to play, I’ll play, whether it’s center or left. But for me, leg-wise, keeping my legs and body fresh, right field is hopefully gonna be the spot.”
McCutchen was a Gold Glove Award winning center fielder during his younger NL MVP years in Pittsburgh. However, he did not play in center at all last season. He is another who could do it in a pinch for a short time, but the Phillies signed him to be their everyday left fielder.
Todd Zolecki of MLB.com quoted Kapler on his outfield situation following the Harper signing:
“Assuming everybody was healthy, the expectation would be that Quinn and Altherr and Nick Williams would start on our roster, but that may not be possible given the current construction and the addition of Harper. It’s kind of a wait-and-see thing at this point.”
That “wait-and-see” has been particularly true in center field Herrera returns now and Quinn will eventually rehab and recover. Those two are still likely to see the bulk of time for the Phillies in the coming season with Altherr as a primary backup option.
The thought that either Haseley or Moniak will ultimately reach or exceed their potential and one day develop into the long-term starting center fielder may be the current long-term Plan A. The unspoken ‘Plan B’ could involve a man from Millville, New Jersey who currently plays on the west coast.
Originally published at Phillies Nation as “Phillies Grapefruit League center field carousel spin continues“