Middleton (L) hasn’t had a slugger like Howard in years

“We’re going into this expecting to spend money. And maybe even be a little bit stupid about it.”
This was the statement made by Philadelphia Phillies principal owner John Middleton at the Major League Baseball owner’s meetings back in mid-November. His statement lit a spark that blazed up Hot Stove logs in the fireplace of Phillies fans everywhere.
We believed all along that Middleton was the ultimate answer to the Phillies returning to the consistent glory that so many in that fan base had come to expect. Remember, this was the man who, after the club had dropped the 2009 World Series in six games to the New York Yankees, made the following statement to Ryan Howard: “Ryan, I want my fucking trophy back. It’s fucking ours!”
From 2001 through 2012, a period of a dozen seasons, the Phillies were playoff contenders nearly every year. But then the bottom dropped out, and for five years the team and those fans wandered through the darkness of a bleak losing wilderness.
For the first decade after Citizens Bank Park opened in 2004 those fans swarmed to the beautiful South Philly ballpark. More than three million tickets were sold in eight of those 10 seasons, including a half-dozen in a row. The ballpark was the place to be, a social happening every single game.
But as the losing began and club management and ownership seemed to give up on putting out a winning product, fan interest waned. The Phillies didn’t even draw two million for three straight years from 2014-17.
Things appeared to be turning around last season. The club was a surprising contender for much of the summer, leading the division for more than a month from July 6 through August 12. Fans responded to the winning and some strong promotional events by filling more than 30,000 seats for 18 games between late-June and mid-August.
But as the team collapsed to a 12-28 record over the final six weeks, fan interest dried up. The Phillies drew that 30,000 figure just five more times. All of those were on weekends, with three specifically for Sunday promotions.
The message from last year when viewed against the previous handful of seasons is clear to Middleton. Do your job and put a winning team on the field and fans will respond. The message from a decade ago is also clear. Put players on that winner who those fans can relate to and who excite them, and they will come out in droves.
General manager Matt Klentak has performed well thus far. In what has been by far his best off-season to date the GM has signed free agents Andrew McCutchen and David Robertson and swung trades to bring in Jean Segura and J.T. Realmuto.
Middleton does understand. He is one of us in this regard: he is also a fan. He is driven. He wants to win. That is why he fueled up his private jet with the red Phillies “P” branded on the tail and had the pilots fly him out to Las Vegas, hometown of the biggest fish in this off-season’s large free agent lake, Bryce Harper.
But it isn’t enough. Look around at the other National League contenders. The Phillies are improved, but so are any number of other teams that already appeared to be ahead of them. The fans realize that this team has a chance to contend for a Wildcard spot now. But that is not what spending “stupid” money is supposed to get you.
The players added thus far by Klentak are respected by most of the fan base. But to really fill up the ballpark again it is going to require star power. Even with the additions and maturation of players like Rhys Hoskins and Aaron Nola, it is lacking marquee star power. There is no Mike Schmidt or Jim Thome.
After the other big free agent whom the Phillies took a run at this off-season, Manny Machado, signed with the San Diego Padres, Klentak stated “If the reports are true, then this contract will exceed our valuation and sometimes you have to be willing to walk away.” This is not one of those times. In fact, sometimes you have to be willing to go beyond mere numerical valuations.
That is where Middleton comes in at this point. Harper is the big fish, the top prize. He would bring the tremendous raw power to the lineup that has largely been missing since Howard’s 2006-09 peak years. He would bring star power not seen around these parts since ‘The Big Piece’ and his teammates began to age-out and break up earlier this decade.
After meeting with Harper, his wife Kayla, and agent Scott Boras this weekend, Middleton flew home on Saturday night due to a prior engagement. While he was gone, representative of the Los Angeles Dodgers reportedly slipped into Vegas on Sunday and tried to take one last shot at luring Harper with a short-term deal. 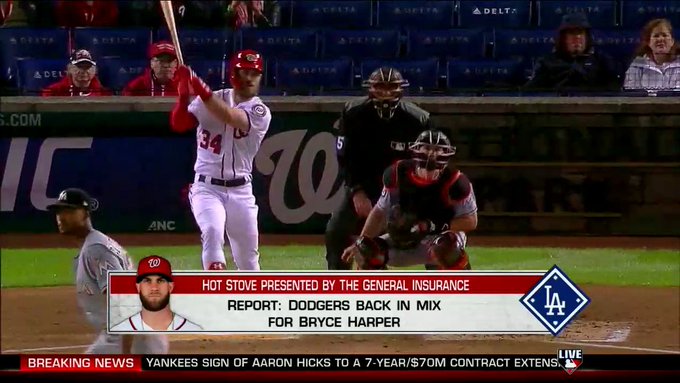 Would Bryce Harper be interested in a short-term, high AAV deal with the #Dodgers?@Ken_Rosenthal discusses the Dodgers reported interest in Harper on #MLBNHotStove.

192 people are talking about this
Twitter Ads info and privacy
I have never met the man, but I believe that I know John Middleton. He is not going to let this get away from him. At least not over money and desire. I fully expect the Phillies owner to be back on his plane and heading back out to Vegas to close this thing out. It may be happening as you read this, in fact.
It is time, and he knows it. When a big game is on the line at the end, you send in your strong-armed closer. When an important business deal is getting down to the brass tacks of final negotiations, you send in the big guns to close. John Middleton is the closer, the big gun. It is time to close out Bryce Harper.
Originally published at Phillies Nation as “Time for John Middleton to closer out Bryce Harper“