We’re now less than three weeks before Phillies pitchers and catchers are due to report for the start of spring training in Clearwater, Florida. Most of Phillies Nation is waiting, now impatiently, for the sudden lightning bolt of an announcement on the Bryce Harper and Manny Machado free agent situations.

However, many sources have reported that the club is also still considering options to improve the starting pitching rotation. Specifically, a proven veteran left-handed winner would be a perfect fit for a club hoping to contend in what appears to be a tough NL East Division in the 2019 season.
The primary name floating around has been that of free agent Dallas Keuchel. The lefty could still return to the only team for whom he has ever pitched, the Houston Astros. However, the Phillies and Milwaukee Brewers also would appear to be good matches.
While there are other veteran left-handers available, including former Phillies pitcher Gio Gonzalez, there is also an option available from inside the organization, one that might be as good an option as any other than Keuchel.
That option is California native Cole Irvin, the club’s #10-ranked prospect per MLB Pipeline. Irvin, who turns 25-years-old on January 31, was the Phillies fifth round choice in the 2016 MLB Amateur Draft out of the University of Oregon.
Irvin signed quickly that summer and was sent straight to Low-A Williamsport. There he made a strong impression, going 5-1 with a 1.97 ERA and 0.964 WHIP over 10 games, seven of those starts. He allowed just 36 hits over 45.2 innings while striking out 37 opposition batters.

Irvin pitched the entirety of last season at the highest level of the minor leagues. For the Phillies Triple A-Lehigh Valleyaffiliates he made 26 appearances, 25 of those as a starter. He went 14-4 with a 2.57 ERA, 1.054 WHIP, and allowed just 135 hits over 161.1 innings with a 131/35 K:BB ratio.
For that performance, Irvin was named as the International League Pitcher of the Year. Back in October here at Phillies Nation we named Irvin as our Lehigh Valley IronPigs Player of the Year.
Overall in his three-year professional career, Irvin has pitched in 61 games, 56 of those as a starting pitcher. He has put together a 28-14 record with a 2.84 ERA and 1.094 WHIP over 358.1 innings. The southpaw has yielded just 311 hits, including just 27 home runs, and has a strong 286/81 K:BB ratio.

Irvin is a Tommy John surgery survivor, having missed the entire 2014 college season. He now throws both a two- and four-seam fastball, mixes in two breaking balls well, has a solid changeup, and knows how to throw strikes. He has also proven adept at inducing ground balls, something that would be of tremendous value at Citizens Bank Park if he can keep it up.
With these results and his demonstrated command and control, Irvin would be a top prospect – if he threw his fastball at 95-96 mph. But since he “only” works in the low-90’s with it, he doesn’t get the respect that his record says he deserves.
During the 2018 season, the Phillies former farm director Joe Jordan was quoted on Irvin by Jim Salisbury for Baseball America:
“He really knows how to pitch. He’s 90-92, and he can go get a little more when he needs it, but he really commands well. His changeup is a good pitch. He’s really learned to pitch inside to righties, and that’s opened up the outer part of the plate for his changeup. The slider and the curveball are good. He has a good arm, a good mix and a good brain. He’s very equipped. Never does he go into an outing without a game plan. He prepares like a major leaguer.” 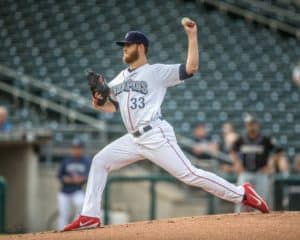 Right now, Irvin appears to be blocked. With Aaron Nola and Jake Arrieta currently fronting the rotation, the club appears set to open spring training with Nick Pivetta, Vince Velasquez, Zach Eflin, and Jared Eickhoff battling for the rotation spots behind those two.
When the Phillies did have to reach down to Triple-A last season for spot starters, they opted to give those opportunities to righty Enyel De Los Santos and lefty Ranger Suarez, who became the first left-hander to make a start for the club since September 2016.
Irvin has received an invitation to spring training, so he will be there when those pitchers and catchers report. Despite his minor league success and the club’s continuing desire to find a left-hander for the rotation, he will be a longshot to make the team, even if he pitches well.
The Phillies can continue to keep Irvin in their minor league system all through this coming 2019 season without having to put him on the 40-man roster. They won’t be forced to make a roster decision on him until next Fall, when he would be exposed to the Rule 5 Draft if not protected by then.
The best chance for Irvin to make his 2019 debut with the Phillies would be for injuries and/or ineffectiveness by the current options to combine with his own continued strong pitching to force the issue.
Irvin appears to be ready right now if called upon. He knows it and is keeping himself focused. Joe Bloss at MLB.com quoted him after his starting assignment in last summer’s Triple-A All-Star Game: “All I can do is handle what I’m doing and just do my best and develop and get myself in a position to be the next guy.”

Originally published at Phillies Nation as “Ready for a big-league opportunity , Cole Irvin is blocked – for now“